I like maps.  Not everyone does, and that's cool.  Have you ever looked at all the different types of projections there are?  Doesn't Cahill's butterfly map look sweet?  Have you ever seen anything as beautiful as the Mississippi's meander maps?  Or the reductionist perfection of a good subway map?

Here's the 15th version of my map of Centerra (one of my settings).  Every place on the map has at least a couple paragraphs for it (even if they're not technically written down) and many places have a couple of pages.  I also have about a half-dozen detail maps at 3x or 4x magnification of all the little interesting bits and bobs that look more interesting up close.

It's just a functional map.  Something I can edit easily, and without any adornments.  It's tough to see on small monitors, but if you're curious enough to zoom in, there's a lot of stuff down there. 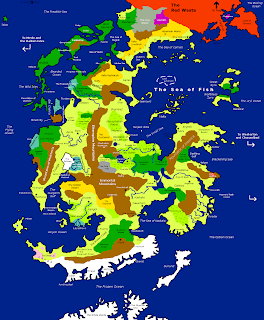 Originally it was just a map of North America that had been flipped left to right.  Here's an early map.  You can sort of pick out Florida and the pseudo-Caribbean on the left side.  You can also learn how fickle I am with naming stuff.  I eventually rotated it 180 degrees. 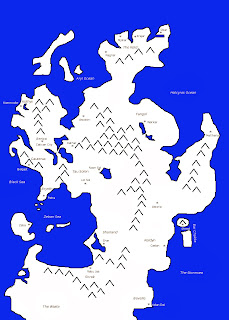 I've put some thought into weather patterns and ocean currents even though I know they don't matter.  I just have a fetish for maps, especially coastlines.  Some coastlines I'll redraw a dozen times because I'm striving for some undefined naturalistic look even though the process that produced the coastline (me) is completely deliberate.  Sometimes I don't even try.  Are those supposed to be fjords way down there in the snow?  Jeez.

I try to remind myself that the map is just a set of hooks upon which to hang interesting things.  It's a tablecloth, not the meal.  It's a self-indulgent exercise, and it isn't important because my players will never know or care what the world map looks like.  But I keep editing it.  I'll add an island when I can't find anywhere else to fit a new piece, or I'll redraw some coastlines when I can't sleep.

I can look at this map and remember the breakup that drove me to redraw the Meltherian peninsula.  When I redid the inner sea, I was living on a couch, and I can feel that scratchy floral pattern mirrored on the Abasinian coast.  A lost summer of narcissism.

Maybe it's like fucking around with that '73 Mustang in your driveway.  You'll improve it and you'll get it running, but most of its value lies in its status as a work in progress.  Some people knit.  Some people whittle.  I fuck around with a map of an imaginary continent.

Probably a good reason to never publish, huh?  Then it'll be set in stone, the tinkering will be done, and I might as well be dead.