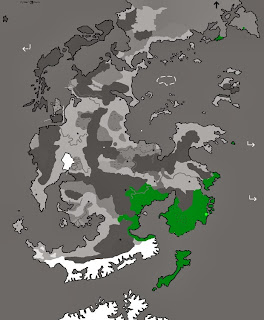 On the southeast side of the Great Continent, there is a country called Noth.  They claim more land than any other nation, and have the second-highest population in the world.  They recently conquered their old rival, Kaskala, and there was much rejoicing.

Noth is young and rich and mad with their own success.  It's gone straight to their head.  In the space of a generation, this cultural hubris has given them a society that is very different than their neighbors.

Most people in Noth are gilean, but they aren't racist.  In fact, they're a very socially mobile society.  It's one of their strengths.  Anyway, gileans are pale white people with pale pink lips.  Their skin turns black when it gets wet, and most of them wear blush and train in martial arts.

The country is at a crossroads.  Everyone is using the word "empire" and Noth seems to be set up to become a world power, but it's not there yet.  What does an evil empire look like before it's ripe? 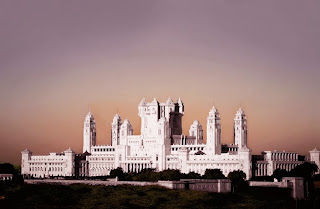 There is a city on the coast, squatting among the gnarled hills.  It's the biggest city in the world.  The materials are cold rain and black iron.  Buildings are covered with vertical lines and polished faces, the stern eyes of saints, politicians, and war heroes.

The city is filled with war memorials and gated cemeteries.  The Storm Bastion, the largest castle in the world, sits in the middle of the royal park, thick with black-leafed trees and tame deer.  King Arcento Brevori IV and Queen Apathia Rinaldi hold court.  Engineers are warriors are revered.  Military service is mandatory for at least 2 years.

Law is draconian.  Traitors are crucified on the outside of the Tower of Blood, with their feet weighted by huge pieces of metal shaped like swords.  They die from exsanguination, exposure, or the royal pets (who fly from the tower's peak every night).  Secret police cover their chests with arcane tattoos (that no one would dare imitate) and protect the populace against rebels and saboteurs.

Large parts of the city are automated.  Visitors see gates that open on their own and barges that propel themselves down the canals.  Most assume this is magic.  It's not.  It's entirely powered by the masses of criminal-slave-prisoners who toil beneath the city in a series of cells and engines referred to as the Pit.  Most of the Pit-dwellers are infected with an attenuated form of vampirism that gives them no benefits but a crippling allergy to sunlight and a dependency on a form of jellied, synthetic blood called rosewater.  The Pit-dwellers call themselves spiders and have an entire culture.  Even their jailors give them plenty of free reign to govern themselves as long as they keep turning the wheels and never try to leave the Pit.

The most visible symbol of Teradar is the Rinaldi Ravensway, which is a series of locks that goes from the harbor, into an aquaduct, and over the city into the highland river systems.  This makes it possible to float a large ship up from the harbor and sail it over the city via the black iron aquaduct.  Poets and engineers have both marveled when a ship sails through the needling spires, casting a sailor's shadows on the marketplace far below. 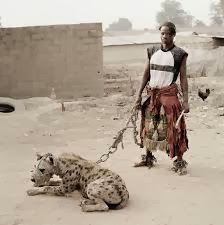 Visitors in Teradar are often amazed at how many fences the city has.  It's traditional for ironworkers to showcase their talents by making tall, elaborate fences out of black iron.  They've been doing this for generations, and as a result the city is rather choked with them.

Tattoos are important, because they signify your dedication to an idea or role.  Trade tattoos are most common, especially around the left eye.  Sailors get tattoos representing how many voyages they have made and where.  Soldiers get tattoos for each campaign and kill.  Even carpenters get tattoos to indicate how many tables they've made.  Most adults have a facial tattoo that identifies their profession.  What if they want to change professions?  Hah!  Questions like that are why other countries are so far behind Noth in industry, science, and exploration.

Crying is common, and public.  Both genders cry.  It isn't seen as a sign of emotional weakness, but rather a method to release emotional weakness before moving on.  If a Nothic man cries after you insult him, it might mean that he is steeling himself to do terrible things.  Warriors often gather together to get a good cry out after a battle, and judges weep before sentencing men to death by torture.  Fainting however, is the pinnacle of femininity, and "good wifes" are supposed to pass out whenever something joyful, tragic, or notable happens around them.

These tattoos aren't always obvious.  Priests get a Z tattooed around their eye, for St. Zdanlos, their patron.  Nurses get a bird's wing over their eye, and doctors get a wren beneath it.

Fashionable men shave sections of their head.  Nobles shave a full hemisphere (front, back, left, right--these all have different meanings).  Entire messages are displayed in hairdos and intricate braids, and newcomers can gain a lot by learning the language of coiffures.  Most men wear beards, thickly braided with loops, coins, and bells.  Loops represent fields of expertise, coins are for wealth, and bells are for honesty (since thieves cannot wear bells).  Pendulous beards and long hair is associated with the wealthy, who have the leisure to cultivate impractically ponderous hair.  A princeling might carry his cigarette case in his beard, and a lady may carry a jarred kitten atop her head, peeking out like an owl.

Parks are popular, but the tree that grows best in the cold, rainy climate is a species of red bamboo, and every park is choked with bearded men wandering the red stalks, smoking furiously and complaining about the rain.  Fashion is mostly bulky, dark clothes with small spots of color.  Among the nobility, silver or gold chains might link a nose piercing to an earring.

Animals are prized, and nearly every family keeps an animal as a diversion or for a profit.  Segrati are huge swans, the size of mastiffs, that are trained and used to fight against each other in highly ritualized, public competitions.  You'll never see a dog in Teradar, since hyenas are immensely popular among the common folk, who raise them, fight them, and dye their mohawks fierce colors.  Nothic people will happily explain to you the superiority of hyenas to dogs. 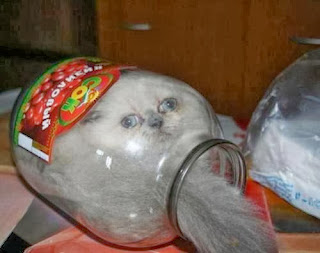 Immensely fluffy angora rabbits are kept by the rich, and herds large (40 lb), rabbits are kept by the common folk, whose soft fur is woven into fabrics.  Especially popular among the nobility is the practice of jarring pets.  Small animals (kittens especially) are sealed into jars with only their heads exposed.  The animal spends its entire life in the jar, and is watered, fed, and cleaned like a houseplant.
Noth is also the only nation to have any relations with the mysterious and feared heremancers of the Darklands.

The food often takes some getting used to.  Nothic cuisine includes a lot of pickled foods and vinegar.  Things like fermented eggs and jellied cheeses are rarely pleasing the first time they are eaten, but Nothics will gobble them down heartily and roar for more. 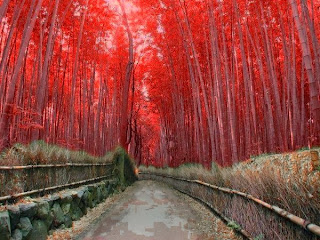 A martial art called cho sabbat is very popular, as well as a board game called jecketts.

The country is also rife with fraternal orders and military brotherhoods.  The military intrudes into many other spheres of life.  There is a strange blurring of the religious and the military, and several of the countries most effective battalions are actually members of the Church of Hesaya (although you wouldn't think so at first glance.)

A couple of notable (and elite) military orders:  The Jaws of Arquette, who eat the bodies of their conquered foes in order to grow stronger and honor St. Arquette, who saved saved a town after eating the body of a giant.  The Wings of Govindesa, who wear jump thousands of feet through and impale their targets on huge, compressible lances (that also serve to cushion their landing).  They honor St. Govindesa, who is the patron saint of the element of air.  (St. Govindesa was also a pacifist.)

Teradar's goals seem to be moving from "conquer everyone" to a more politically viable "colonize everyone else".  Toward this end, they are fighting orcs in Drimthier, rebels in Kaskala, darklanders in Farghist, and in the Land of Flowers. . . they're fighting something, even if they don't know what it is yet.
Posted by Arnold K at 9:04 PM