Once there was a famously incompetent wizard named Drimwick.  Before he vanished from history, he invented the spell that we now know as Drimwick's Final Blunder.

Drimwick's Blunder is an infectious spell that can potentially turn all of your known spells into copies of Drimwick's Final Blunder.  In its final stages, the disease also turns you into a boggy (an adorable, diminutive fish-frog-human hybrid). 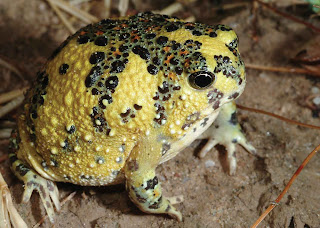 The Blunder functions exactly like Magic Missile, although it can be any level.  If it is cast at higher than 1st level, it does an extra +1 damage (per bolt) for every spell level it is beyond first.  When cast, it resembles a giant, rippling, green-and-black loogie that streaks towards its target.

The disease manifests a greenish tinge to your skin, and the compulsion to say "boggy" in every sentence (much like a hiccup).  At the conclusion of the disease, the affected person suddenly shrinks a couple feet and turns into a bog-standard boggy.

At the end of every day spent in a location with high humidity (such as a swamp), the spellcaster must make a save vs disease.  If they fail, the spell infects another slot.  If they succeed, nothing changes.

At the end of every day spent in a location with low humidity (such as a house with a fireplace), the spellcaster must make a save vs disease.  If they succeed, one of their infected spell slots returns to normal.  If they fail, nothing happens.

If they successfully infect another spellcaster with boggy pox, one of their infected spell slots returns to normal.

There are colonies of infected boggies in the wilderness (called boglocks by some).  They are despondent creatures, eager to infect others with their disease and hopefully regain their humanity.  (Very possible if they only had a single spell slot infected.)  Any children they had while they were boggies will remain as boggies, however.

Casters usually know that boggies can carry boggy pox, and are appropriately wary of the little beasts.
Posted by Arnold K at 1:52 PM