I've written before about a type of DnD where players' power levels off early instead of continuing linearly up beyond the stratosphere, where they collide with satellites and survive, despite taking 10d6 damage from the impact.

One simple way to do this for HP is to cap HP at level 3 (or whatever), but allow the player to keep rerolling their HP, ignoring the new roll if it is lower.  The average HP per level looks like this: 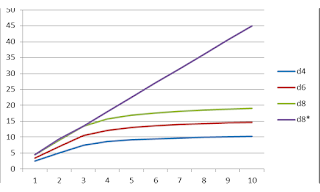 I've included the non-plateauing version of the d8 HD, too.  But that's just averages.  If you want a more nuanced look at the HP spread, here's a graph of the chance of each possible HP score for a d6 HD.

You can see how it eventually crawls up to 18, and then kind of scrunches up in front of it.

And thanks, anydice.com, for keeping me company at 2am and making such nice graphs.
Posted by Arnold K at 9:00 AM