Roaches are anthropomorphic beetle-people who come from another dimension.  They are about 4' tall and range from poop-brown to a lovely dark bronze color.  They're one of the more common xenocultures on the Noxious Continent.  They are a player race!


There are many different kinds of roach people.  Listing stereotypes would only do them a disservice, but that is exactly what I'm going to do.  These are the sorts that you'll find around post-apocalyptic 1929 New York.
Full details after the break.

Roaches are obligate coprophages.  They eat the feces of other animals.  One cow or four humans can "feed" a roach as long as they themselves are fed and the feces is fresh. 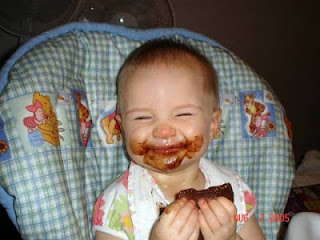 Because of this dependency, you'll rarely find a village of roaches in the wilderness.  Why be ranchers when you can just get food for free at a major city? Of course, most people are smart enough to sell their poop to a roach for a few cents, but supply generally outstrips demand.  And many roaches are fierce hagglers.

Some roaches revel in the disgust that their diet causes humans.  Others are careful to get the shit smell off their breath so as not to offend anyone.  Others are weirdly confrontational about it.

Roaches love money just as much as humans, but they also have a separate form of wealth: dungballs.  Every roach rolls one.  These things are usually kept tied down under a tarp, or locked in their houses.  Poor roaches will have a dungball the size of their fist, or none at all (but this is a truly desperate specimen).  Wealthy roaches will have dungballs the size of two-story houses, wrapped in expensive silks and perhaps with the interior hollowed out into a couple of rooms.

When roaches travel, they usually bring their dungballs with them.  On hills and on rough terrain, the only way to do this is by pushing it (which roaches do with their legs).  But a preferred, more elegant way to do this is to roll atop the dung balls, like a goddam circus clown.  With a mid-sized dung-ball on flat ground, they are just as maneuverable as if they were standing on the ground. And perhaps more importantly, it elevates them high enough that snot-nosed humans can't literally look down on them. Many roaches prefer to conduct their business from atop their dungball, so if you see two roaches discussing a business deal, you know exactly which one is richer.  Wealthy roach leaders will usually travel in style, by walking atop their ornamented dung-houses while their minions push the thing along the ground.

When resting or sleeping, roaches prefer to do so atop their dungballs, hugging their treasure firmly. 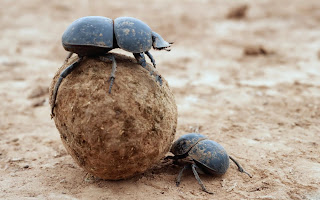 The sun is a great dungball in the sky, of course.  The sun is a powerful symbol of wealth.

In areas with an abundance of roaches, shit-traders can make a decent living.  That's when you'll start seeing  the shit-barges in the Hudson River.

Because roaches produce a lot of offspring and subsist on the waste of other creatures, cities will always have roach-slums.  There are wealthy roaches and educated roaches, but the nature of their procreation and nutrition pretty much ensures these are the minority.

Roaches arrived in America with the Fatties, during the second wave of immigration (in 1896).  They're found in every major city, but sometimes you will see them setting out into the interior wastelands in big caravans, pushing their dungballs before them.

One location where they are well established is Richmond Island (which you may know as Staten Island).  The towns of Richmond and Fresh Kills (which is more accurately described as a landfill) is full of them.  On the foggy mornings you can usually see the shit-barges hauling their payload through the Fresh Kills estuary.  Their signage and graffiti can be found all over the island, which resembles a crude form of Egyptian heiroglypics.  There's also a lot of cows wandering around (but relatively few cowpies on the ground).

The roaches also dig underneath Richmond Island, exposing a great many Native American crypts that are millenia old.

Outside of Richmond Island and in the rubble of Old New York, you can usually find roaches living in small, fierce tribes.  They make their homes in abandoned buildings, use white paint to cover their brown-black bodies with heiroglyphics, and charge travelers tolls, which is usually money or poop.  They secure their tiny territories with bullets and spears, caked with shit and bad batches of black tar heroin.

Most roaches aren't extremely religious, but some of them are.  And those roaches are powerfully monotheistic, and worship a god that they call Baat.  She is the cow-god of the the ancient Egyptians.  Many of their ceremonies involve the Milky Way, which they insist was produced from her teat.  They claim that on their homeworld, there was a similar dark band that they referred to as the Fecal Way, which was produced by her asshole.  It was twice as magnificent as the Milky Way, they say.  Maybe thrice.

Baat is a cow-goddess, and she is usually depicted as a cow with long eyelashes or a human with cow's ears and long curving cow horns.  In nearly every depiction, she is shown in the act of defecating (sometimes explosively). Especially ancient depictions will show her as a buxom woman with a blank face and curving horns for arms. 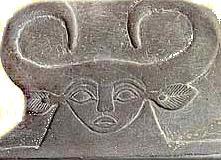 The roaches believe that Baat will only give them succor and blessings as long as she is depressed and down-beaten.  For this reason, roaches utter neither prayers nor thanksgivings to their goddess, but only insults.  Their ceremonies consist largely of shouting rants and invectives, and/or inflicting violence upon her images.  Despite all this, roaches will tell you that "it's all a show" and "we wouldn't let anyone actually harm her." 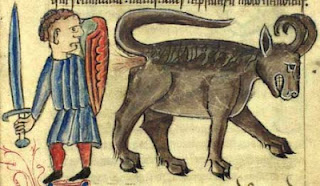 These religious roaches will also react very angrily if Baat is insulted by another creature, since it clearly means that the other creature is trying to attract Baat's blessings onto themselves and away from the roaches.  "Shut your fuckin' mouth! Get your own damn goddess!"  They are also leery of sharing her name with other races, and will usually refer to her as "Cow" around non-roaches.

Whenever a human might say "Oh my god!" (surprise, anger, gratitude, orgasm), a roach will say "Fuck you, Baat".  Or in mixed company: "Fuck you, Cow!".

Most of the time, roaches are singularly disinterested in sex.  They live and associate with other roaches that share their gender.  At times, they even sound like second-graders.

"No WAY would I fall for some dame."
"Fuck you cow, boys are so gross."
"You humans are disgusting, haha!  Petting parties. . . I think I'm gonna hurl."

The youngest of them may even espouse dumber ideas, suggesting that they reproduce via parthenogenesis, or by inseminating dung.

This all changes once they get into close enough proximity with each other. If you trapped a couple of roaches in an elevator together for an hour, they'd spend the first half hurling insults and the second half fucking.

After mating, the female will eat the male's wings (adults are too heavy to fly anyway) and lay eggs beneath his wing case.  The couple will usually walk away from the encounter happy and slurring like drunk people, but that mood will quickly turn into confusion and exclamations of "That wing-eating bitch!" and "I can't believe what that smelly jizz-rag did to me!"  This causes no end of misinformation among humans, who usually only hear about roach reproduction from angry, confused roaches with backs full of eggs.

Any culture that roaches have is usually a filthy, pseudo-Egyptian version of whatever city they are living nearby.  Roaches speak a bizarre patois of ancient Egyption and whatever culture they are currently living next to.  Their languages are always full of clicks and crude insults, perhaps because of their religion.

People meeting roaches for the first time are usually struck at how fantastically rude they can be, but they don't really mean it. Some roaches learn to be polite. Most don't bother.

They have a few hand-signs that it may be good to learn:

Palm up, fingers curled: a threat, a dead bug

Clapping the four fingers against the same palm: an insult, you fuck like a human, you fuck humans