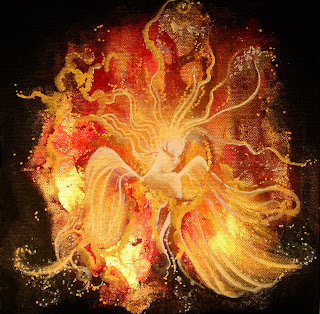 You'll see this type of fire burning in the Hesayan Churches, and sometimes carried by their lantern bearers.  It resembles normal fire, except that it is pure white, "soft" around the edges, and burns in slow motion (compared to mundane fire).

Holy fire is hot, but it never burns living things.  People who have put their hands in holy fire describe it as painful but invigorating, like a hot spring.  Objects are still harmed however, and it does tremendous damage to the undead.  The light from holy fire reveals invisible things, and lesser forms of undead find the light from holy fire repellent (especially ghosts, who are accustomed to being unseen).  Zombies are especially susceptible to this effect, and holy fire will drive them away for as long as it burns.

Holy fire can only be lit from another holy fire, or from a certain spell cast by senior clerics of the Church.  The only fuel that can sustain holy fire is holy water.

This type of fire sheds no light and gives no heat.  It is normally started by magical means.  Aside from that, it is exactly like normal fire, and only experts can tell if an object was burnt long ago by ash fire or mundane fire.

Watching felfire spread is bizarre.  Paper will brown and then blacken.  It will spread to the desk, which will discolor and collapse, releasing a shower of cold ashes into the air.  Finally, the floors and walls will follow, as cracked, black charcoal spreads through the wood like a cancer.  Disturbing the charred products will release voluminous clouds of choking ash.  These fires are especially dangerous to houses with sleeping occupants, since it is nearly silent.  Necromancers are also fond of casting this on their enemies, who may not realize that they are being consumed until it too late.  Felfire causes no pain, just an instant sensation of deadness (which may be hard to notice in the middle of a battle) and retina damage (if you try to look at it).

Water extinguishes it, as does a lack of air.  However, since it is harder to "see" which parts are actually burning, it is easy to attack the wrong part of the felfire, or to badly misjudge its size.  Additionally, ash fire frequently releases poisonous gases, and many would-be rescuers have charged into an ash-burning house, thinking themselves safe from any heat, only to collapse on the shivering floor and be consumed.

It is commonly accepted that the stolen heat from felfire is used to stoke the fires of hell. 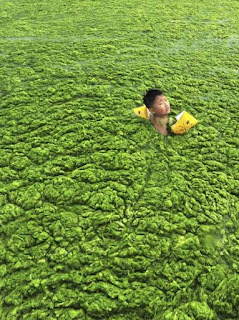 Just as forest fires incinerate forests, so do outbreaks of green slime disintegrate them.
Green slime is related to the larger, mobile oozes.  Like its larger cousins, it also eats organic material.  It can dissolve a man's arm in seconds, producing an equal volume of slime.  It is not hard to see how this could spread and consume a forest.

Green slime is destroyed by two things: heat and sunlight.  For these reasons, it is normally only found underground.  However, under certain circumstances, it can erupt onto the surface and turn entire forests into slimy wastelands.

The conditions only occur in wet forests that have consecutive days of rain, with sufficiently heavy cloud cover to prevent any sun from shining through.  The jungles of Basharna and the southern Dembraava Wilds are known to occasionally have slime outbreaks.

Those who have survived a slime wave (for that is what such things are called) describe the horrible noise it makes as it consumes the wet forest.  They say it sounds like a million hands stirring a million bowls of noodles, which I suppose doesn't sound very terrifying out of context.

Unlike forest fires, animals from the slimed sections of the forest sometimes carry small pockets of slime on their bodies.  When these animals flee from the slimed sections, they carry the slime with them.  Rangers fleeing a slime wave report seeing melting deer dashing ahead of them, only to collapse a few hundred feet later into pools of slime that rapidly spread out into the dark, waterlogged forest.

And there are rumors of even stranger things happening in a forest entirely consumed by slime.  They say that some animals are not eaten by the slime, but form some strange partnership with it (becoming sludgebucks, slimejaws, or green anglers in the process) .  These animals move easily through the slimy mire, and vomit green slime on their enemies.  And no one has ever offered a satisfactory explanation for the the whirlpools that suddenly form in the deep spots, after all the slime has oozed downhill.

Rangers and druids are sometimes tasked with saving towns from slime waves.  This is an extremely difficult task, but with sufficient resources it is sometimes done.  Ironically, the best countermeasure is to burn sections of the forest to create "slimebreaks".

And even after the slime wave has been exhausted and deadened by sunlight, green slime can still survive beneath the baked surface.  Even years after a major slime wave, parts of the Dembraava Wilds remain dark and wet enough to sustain small patches of green slime.  Many a Dembraavan Ranger has fallen into a murky pool, only to emerge with a patch of green slime rapidly consuming his knee.
Posted by Arnold K at 9:21 AM