"Is someone there?" Somin asked as he whirled around, looking for the source of the noise. But there was no one there. Just the wet wood that bristled around him like a statuary. The rain had stopped, but the sun had not yet risen. Somin licked his lips and blew some rain water out of his straw-colored mustache  He had heard what sounded like sticks snapping under a heavy foot.

He cleared his throat and tried again. "It's very bad luck to sneak up on a bard, you know." But the dark forest did not answer.

He was just about to resume his lonesome trek when the dripping branches spoke an answer back. The voice was soft and deep, and had a curious inflection. It handled syllables carefully, and gave the impression of speaking between mouthfuls. The voice said, "You are lost, human. The road is not in this direction."

Somin looked for the source of the voice, but all he saw was a singular owl sitting high in a tree, watching him with a inscrutable expression."

"Ah, but it's even worse luck to lie to a bard. I know for a fact that the road is this way. Who are you, that dissembles so poorly?"

A ragged, throaty chuckle reached Somin's ears. "It doesn't matter who I am. I have no name. And I don't care to learn yours either. But I am interested in why you believe you will make it to the road. The night is deep, and the shadows are eager to lead one astray." More crunches and crackles betrayed that the speaker was moving closer.

Somin jumped when a screech sounded from the treetops. When he looked up, there were two owls, gazing at him placidly.

"It may be dark, but my mind is clear and I know these woods. Iasu watches over my steps." He peered forward into the bushes, searching for the source of the voice. There was something moving in the foilage, something low and slouching. He looked over his shoulder, noting the best path for a hasty retreat. He drew his sword. His arm, he noted gratefully, did not shake. "What manner of a creature are you, then? If your own name is foreign to you, then what do you know?"

"I know how painful it is to be eaten alive." The creature spoke matter-of-factly, almost casually. "I know this because they tell me so."

And then the creature stepped into the small clearing, and Somin saw it for what it was. Two faint yellow disks bobbed twoards him. They were eyes. Huge, pale, and expressive, they were set into a skeletal head. It's fur was mottled and patchy, variegated with different browns, greys, verdigris, and umbers, which gave the creature a ragged, scruffy look. Overall, it resembled an emaciated bear with gracile limbs, but he could see that its forelimbs ended with very human-looking hands.

The creature licked it's sallow lips, exposing cankered gums and yellow teeth. "I wonder," it said, "will you try to run?"

Looking over the tip of his sword (which now quavered), Somin said, "You know, I think I will." And he did just that.

Behind him, he heard the ghoul bear give a roar of satisfaction. And as its heavy footfalls thumped into pursuit, a dozen barn owls began screeching in chorus. 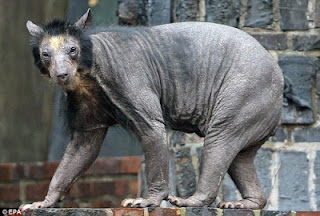 The smallfolk call them dauchomo, but most of the world knows them as ghoul bears. In myth or story, they are also known as ragbears. They are a menace throughout all of the temperate regions, and make their homes in forests and caves the world over.

As mentioned above, they resemble malnourished bears with skull-like faces and a disconcerting level of human features. Their retinas reflect light as well as cats, making their pale yellow stares one of their most famous traits. They run as fast as a man, and can run for long times without tiring. They are carnivores and lovers of carrion. They speak the secret language of birds, and consort with crows, owls, and vultures. These birds will usually report where lone travelers are liable to be found, and in return, the ghoul bear shares the kills with them.

Of course, what they are most known for is their extreme talkativeness. It is unheard of for them to attack a creature without speaking to it first. Even when they ambush a sleeper, they will still wake him by sitting on his chest and explaining what is about to transpire. Or perhaps they will drag the unfortunate man by his head, throw him in a ravine, and spend some time speaking to him, then.

They are intelligent, but they scorn all trappings of civilization. They keep the treasure that they encounter because it can be useful as a bargaining chip, but all other possessions are defaced and scattered across several square miles of forest (a task that they perform diligently and happily). And although their weird, hand-like paws are similar to human hands, they never wield a weapon, preferring quadropedalism and teeth over anything else. They scorn cleverness, ridicule sophistication, and ignore sophistry. They prefer the bestial comforts that life has to offer, and of course, conversation.

Their breath is a poisonous gas that burns the lungs can causes paralysis. Their saliva is a cure to this same poison (which is really just the same chemical in different concentrations). They use this ability to disable multiple people. If faced with several foes, the ghoul bear might knock one person down, exhale heavily in his face, and then deal with his companions while he lies paralyzed. He will remain paralyzed for several minutes, or until the ghoul bear begins eating him.

They are especially fond of cracking open the long bones and licking out of the marrow. If their prey is still alive when they do this, they will try to render him harmless by breaking all of his limbs prior to gorging themselves on their victim. They also croon softly to themselves while they eat, singing slow songs about violence and anthropophagy.

Despite their peculiar brand of psychopathic misanthropy, they can be reasoned with. Witches sometimes have dealings with them. Bandits and any groups of people that frequent the deep woods usually have some sort of agreement worked out with any resident ghoul bears. Lastly, ghoul bears sometimes bribe their way into graveyards, where they will spend several nights exhuming corpses and gorging themselves with reckless abandon. They just really like eating people.

Legend maintains that ghoul bears were once people that were transformed into their current forms by the depths of their misery. Objects that remind them of their previous lives enrage them, especially mirrors.

And as a bonus, this is what a barn owl sounds like.