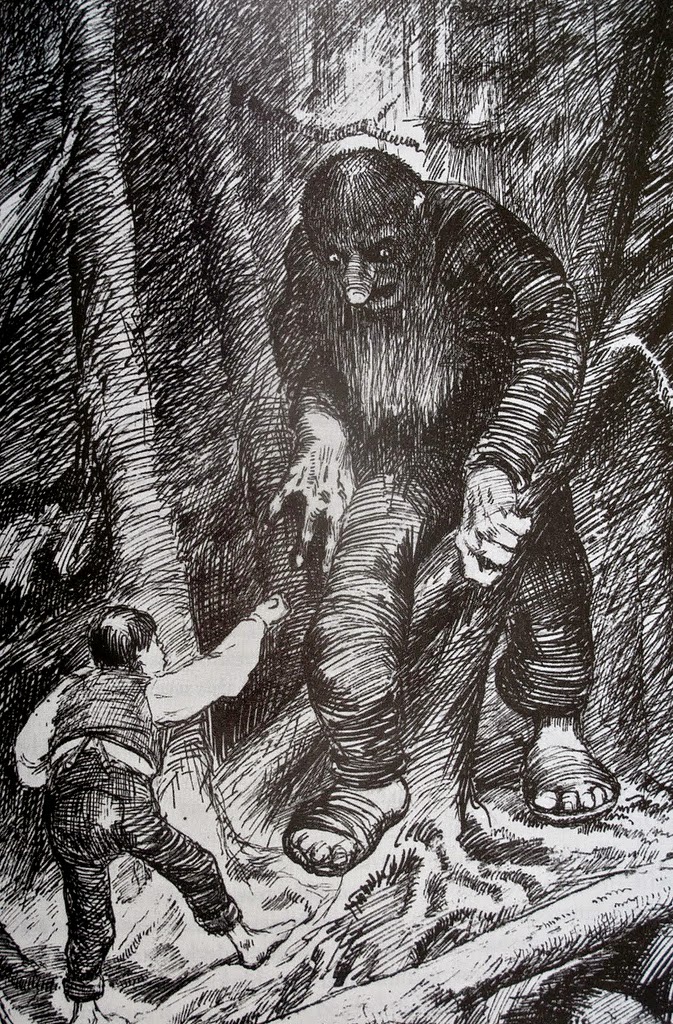 Trolls are old.  They prefer caves and natural places, often shunning civilization and architecture.  They squat in squalor and loom in gloom, but they are intelligent and much more intelligent than most people would believe.

They all know each other.  Trolls live a long time (and may even be immortal) and have a good memory for names, especially each others.  Although they don't travel very often, they often meet each other to swap news.  If a troll survives its encounter with the party, there is a small chance (25%) that other trolls will hear about them.  Trolls are famous gossips, and many of them claim to have met dryads, demons, and even gods.

Despite being, basically, horrible warty monsters who live in caves, all trolls share a kinship, and are very friendly with each other.  No troll would ever attack another troll; as family is very important to them (except for babies; they only seen as food).

All trolls have tails and have hairy arms (except for elder rock trolls, who instead are covered in lichens).  They blend in with their natural environment (trees for green trolls, rocks for cave trolls, and hair for longtail trolls).  When treated politely, they can sometimes be extremely hospitable (though this depends on the reaction roll).  They are all afraid of church bells (or any booming noise).

Green trolls are thin and rubbery.  They have long noses and hair that looks like broccoli, and their mossy arm hair is long enough to dragon on the ground.  They eat flesh and are widely regarded as the biggest assholes in the troll family.  Even other trolls can barely stand them.

It is known for its powerful regeneration ability.  If it is losing a fight, it is clever enough to escape, regenerate, and return a couple minutes later.  It may even escape by jumping down a pit deep enough to kill it, then returning from death a minute later to resume the attack.

Dying destroys a lot of brain cells, and so green trolls who return from death are always confused, and have a 50% chance to forget what they were doing prior to dying.

Although it is a whole creature, each part of a green troll is alive.  If a green troll is dismembered, each piece will attempt to convert itself into a mini-troll, which will then grow into a full-sized troll.  Unless you submerge each piece in a broth (as some wizards have been known to do) troll pieces do not usually have the energy reserves to turn into a mini-troll (10% success rate, takes a day), although there are plenty of stories about troll hands crawling off after being severed (which can always be reattached, of course.)

Even cutting off a troll's head is not an obstacle.  It merely creates a toothsome head and a clumsy body (-4 to hit).

In theory, you could put a troll through a cheese grater, put the resultant shavings in a nutrient broth, and gain an army of micro-trolls (which would later grow to full size).

Any slashing attack that rolls a natural 19 against a green troll lops off a rubbery limb (random).  Hands continue to fight (as crawling claws) while legs just hop about.  Trolls don't bleed (the arteries seal instantly) but their blood is a potent alchemical fluid.  Drinking it grants regeneration (1 hp / minute) for 3 minutes, but if the drinker is dropped to 0 HP while under it's effects, there is a 2-in-6 chance that micro-trolls colonize the drinker's blood stream, killing them in 1d20 hours unless the micro-trolls are removed (such as by a remove disease spell). 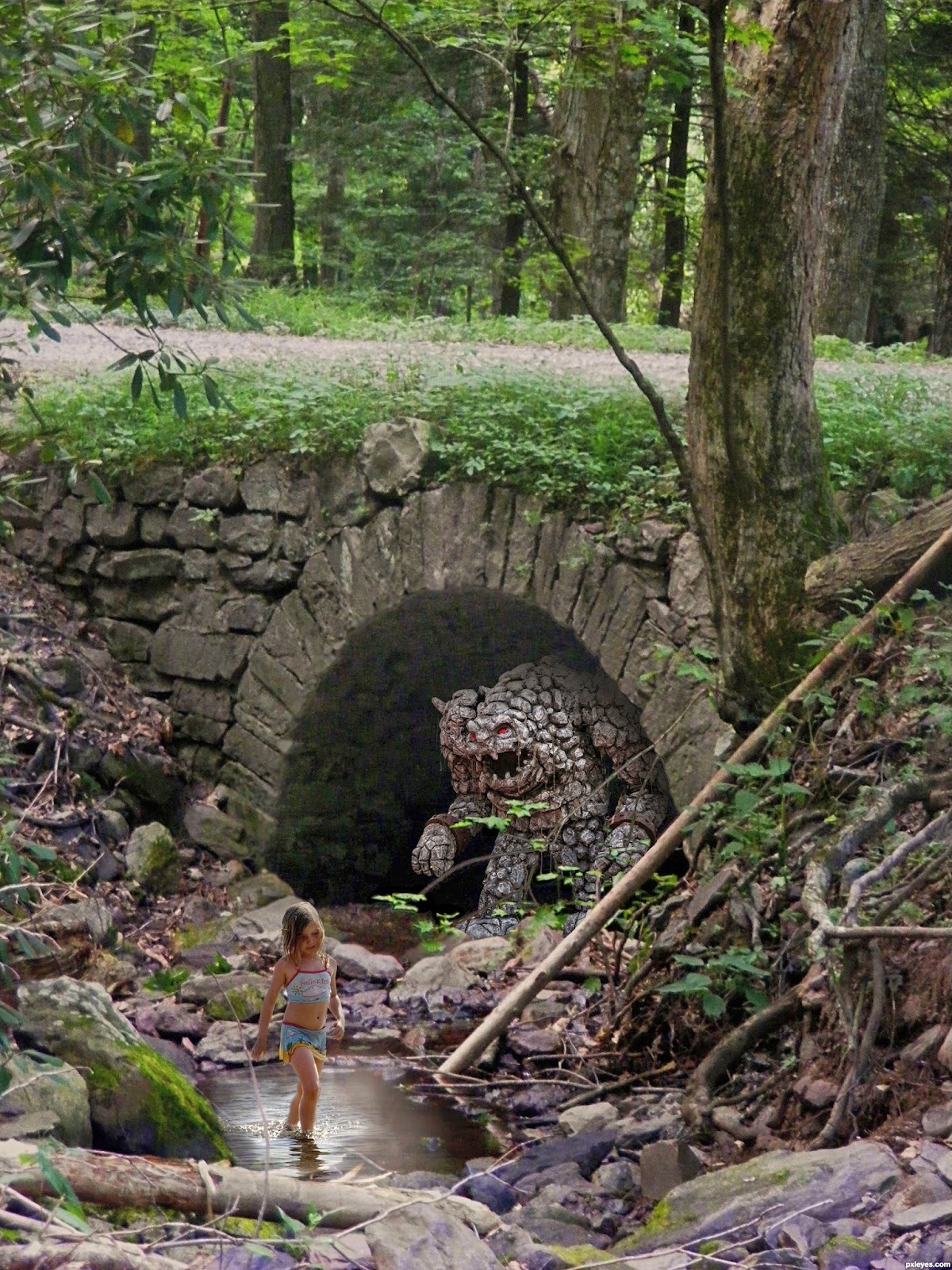 Rock trolls are made are slabs of muscle beneath a heavily calcified skin.  Their inner tectonics gradually make them thicker and more asymmetrical.  Their skin is pebbled with rocky outgrowths, and older rock trolls grow huge crags on their backs reminiscent of mountains.  They eat gems and have prodigious noses that they can use to sniff out gemstones (a good bribe, if you don't mind watching them being eaten).

Rock trolls live in caves and fear the sun.  They believe that they are the original children of the earth, calved off by earthquakes.  They are hungry because for the first hundred years of the world's existence, there was nothing to eat.

Things Growing on the Rock Trolls Back 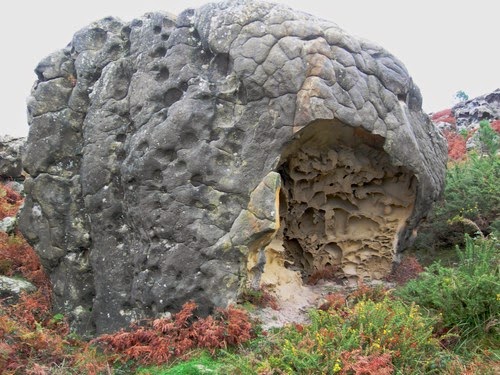 Elder Rock Troll (Galeb Duhr)
HD 8  Armor plate  Move 6
Slam 1d8+4  Int 8 Morale 10
Half Damage from slashing, piercing, and fire.
Charging Downhill will double movement, and can trample multiple targets.
Awakens Stones within 100', which can see, talk, and are loyal to the rock troll.
Animates Stones which act as miniature versions of itself (same stats except HD 3, slam 1d6).  Is accompanied by 1d6 such stones.
Darkvision.

Unlike their younger selves, elder rock trolls actually do become stone.  Rock trolls that grow so old and huge eventually turn into galeb duhr.  At this stage in their life, they also get very sleepy, and will slumber for weeks, months, or years.  They are largely indistinguishable from natural rocks at this point.

They claim that all of the notable stones in the world are actually hibernating trolls.  Even mountains are said to be primordial rock trolls, hibernating until the next ice age. 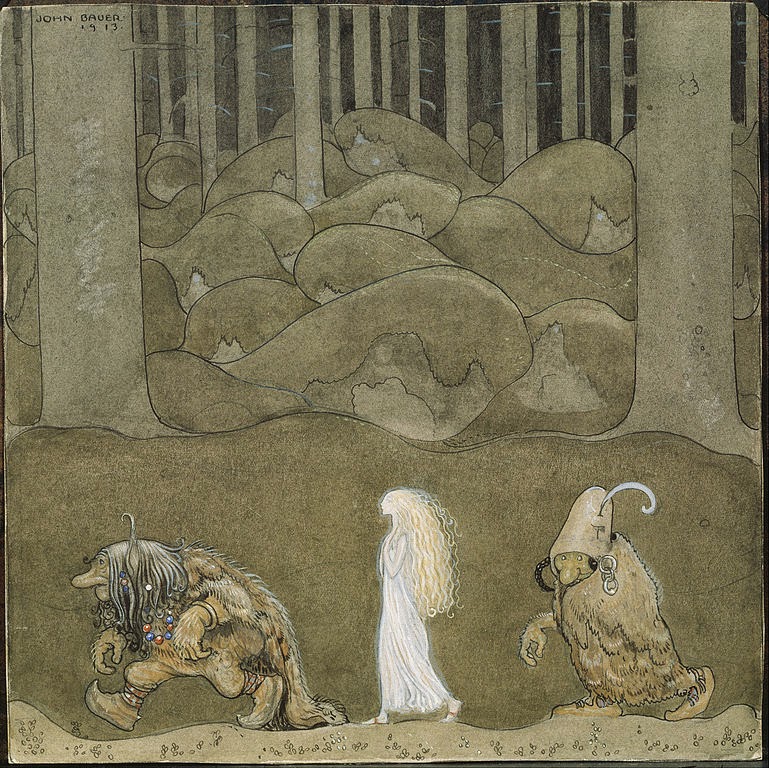 Fat and hairy, longtail trolls are the friendliest of the trolls (although they are still very likely to eat you).  They dwell among the pines, in groups of 1-4, where they eat travelers, guard treasure, and brew beer.  They are charismatic in their own way, and a few of them have human spouses.

They revel in the trappings of human civilization without really caring much about the effects.  They might have hundreds of forks piled on their dinner table, but still eat with their hands.  They might buy a nice bed with pleasant bedsheets, and yet sleep on a pile of pinecones behind the shed.  They are cultural tourists.

When a female troll gives birth, the first thing she does is climb the tallest tree she can find.  Then, she throws her babies (by the tail) as far as she can, knowing that she'll eat them as soon as she misses a meal.  (All trolls get pretty nasty when they're hungry.  Longtail trolls are no exception.)

Longtail trolls are knowledgeable about a great deal of mythology, and often know things that humanity has forgotten (or failed to learn).  They are sometimes sought for their wisdom.  They can be friendly and social when well-fed and/drunk, but become callous when hungry (even forgetting old friendships).  They are lazy, and will prefer to steal food and beer rather than fight for it.


Longtail Troll Magic
Trolls with 23 or more HP have a single magic ability that they can use at will.

Longtail Troll Homes
Trolls don't like discussing anything of importance out in the open.  Friends and enemies alike are often invited back to the troll's house, to have some nettle tea and meet the spouse.  Trolls have +2 AC and saves when in their house. 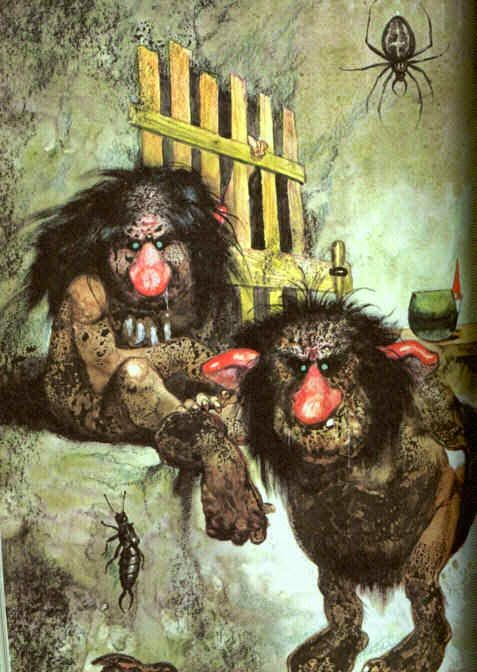 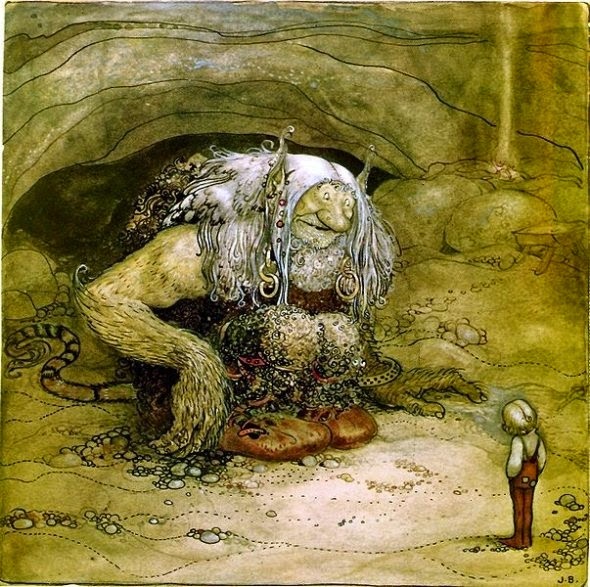 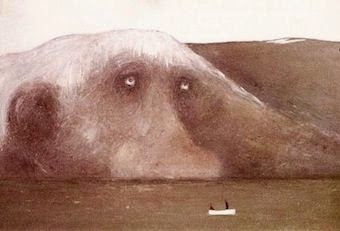 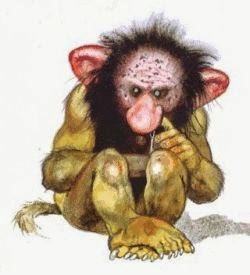 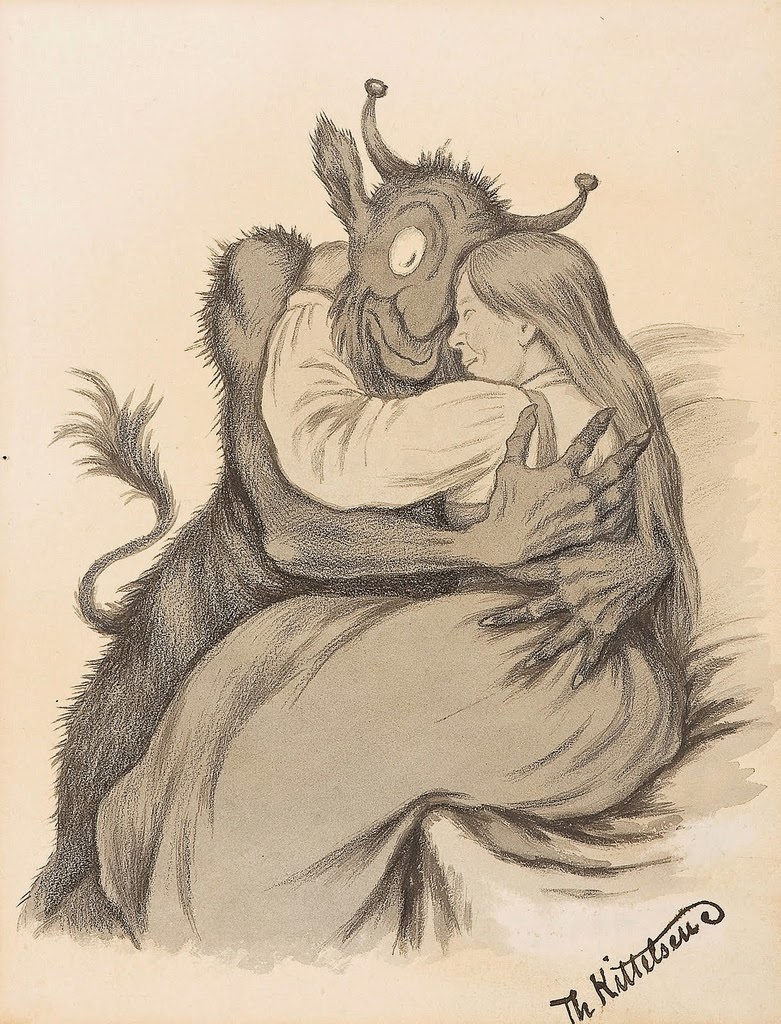 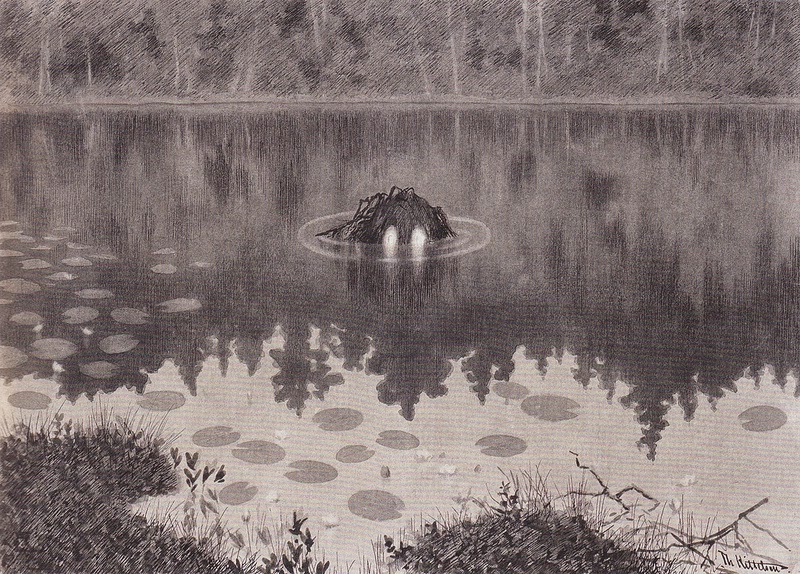 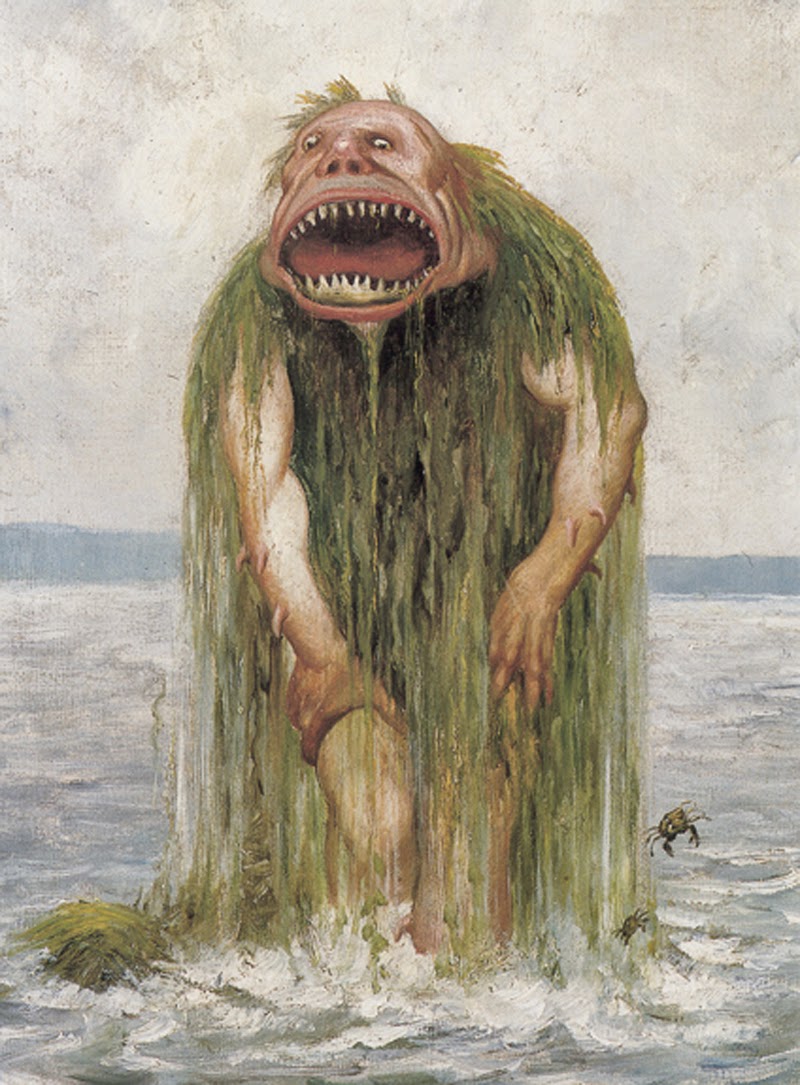 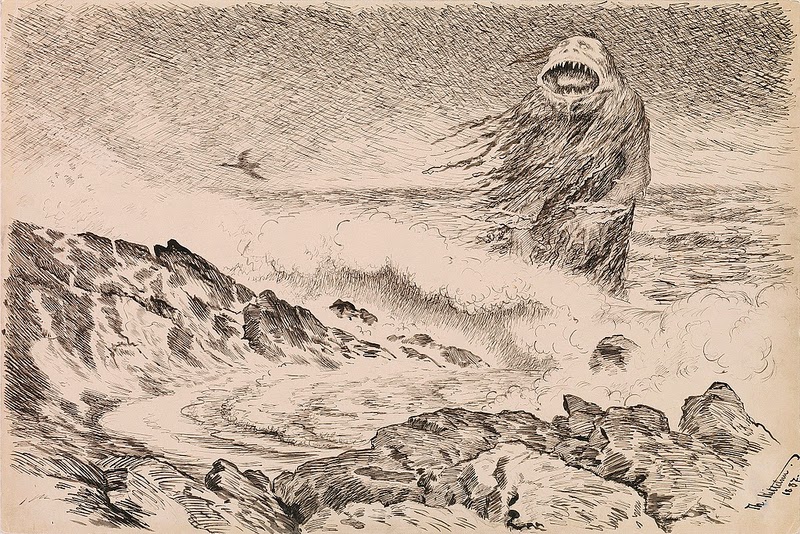 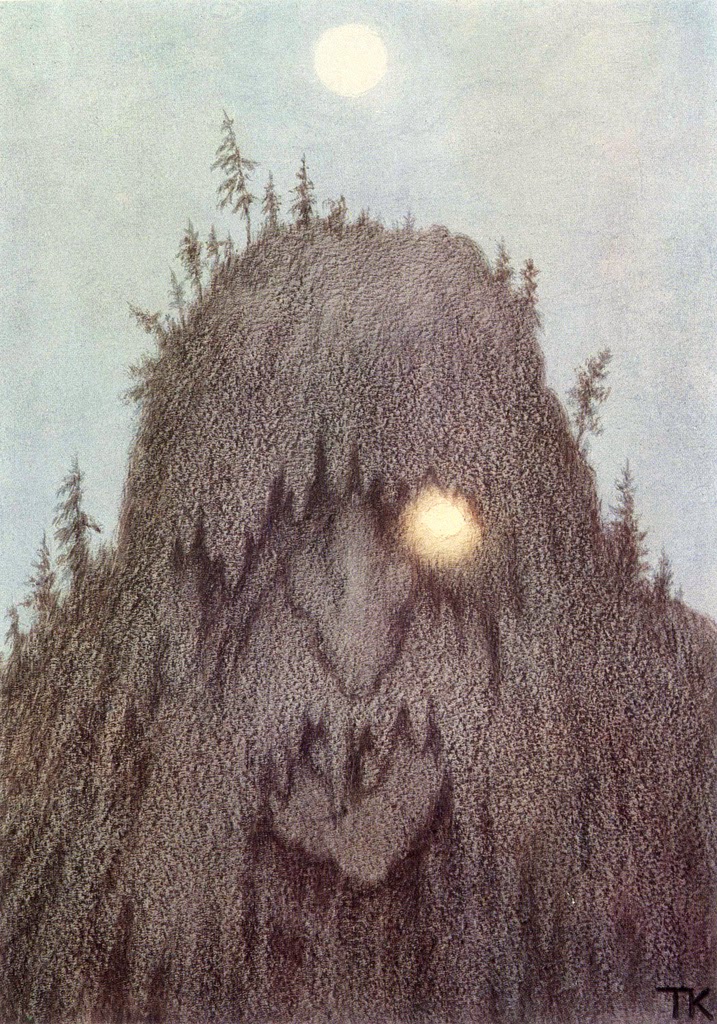 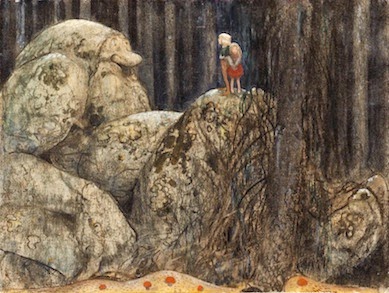 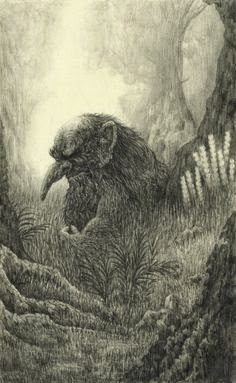