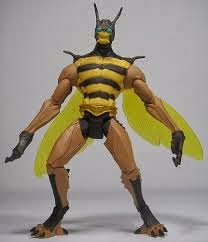 Bee-Ladies are just like human Fighters, except
If the game has a skill system they don't have normal fightery skills, and instead get either (a) alchemy and poisoncraft, or (b) mechanisms and jewelry, depending on whether the are (a) doctor-assassins or (b) jeweler-engineers. 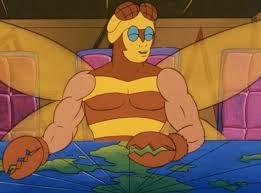 Bee-gentlemen are huge, brutish, and filled with exotic venoms.  They're too huge and too stupid to be suitable for PCs.

Bee-ladies come from a complex system of castes and obeisances.  Hives are vertical affairs, with stacked layers of honeycombs.  Bee people are tech-savvy, and so you will usually see sconces holding oil lamps (usually in sinuous, art deco flower motifs).  The walls are made of a hard wax comb, supported by a skeleton of harder, resinous material called propolis.

The upper reaches of the hive are used to store honeycomb, just tons and tons of honey.  Beneath that, you have other areas--pollen storage, drone comb, and brood nests.  At the very bottom of the hive is the queen.

Bee-people don't follow the physiology of real bees exactly.  Bee-ladies are fertile and intelligent drones.  They have slightly smaller sisters, though, who are sterile and extremely simple-minded workers.  The male drones are huge, brutish things, kept loyal to the queen by a regimen of genetics and pheromones.

New colonies are started when the queen decides that the colony is getting too crowded, and gives one of her fertile daughters some husbands, and sends them out into the world.  The males die after they mate, so the princess is always sure to bring some sisters as well.

Bee-people have a complex religion that based on circles.  This religion is practiced and communicated by dancing.  For them, there is no social aspect of dancing, only a religious or communicative one.

Hives are maintained at a sweltering temperature, usually around 35 degrees centigrade.  Hives smell "mousey", and oftentimes suffer from rat infestations.

Baby-faced larva are very friendly, and will often try to talk to visitors from they honeycomb-cubbyholes.  All the curiosity and babbling of a toddler, but none of the legs.

In the natural world. the bee people battled with the hornet people.  While a bee lady is about 7 feet tall, a hornet person is about 20' tall and covered in armor as thick as a peanut-butter and jelly sandwich.  Hornet people are absolutely terrifying beasts of destruction.  a hornet person can kill 40 bee people per minute, and a dozen hornet people can easily destroy a hive of thousands before consuming the dead bee people.

Bee people have weird cultural conflations, and they draw boundaries where humans don't.  For example, assassins and doctors are seen as a single profession, simply two sides of the same coin.  Likewise, jewelers and engineers are seen as the same thing. But teachers who teach math and chemistry are completely different from those that teach language and art, though both are revered.

Bee-people are capable of potent acts of cruelty, both towards non-bees and bees alike.  This side of them is not commonly seen, nor discussed.

READ THIS:
http://en.wikipedia.org/wiki/Asian_giant_hornet#Predation
Posted by Arnold K at 2:00 AM