+Alex Chalk mentioned that he could really use a wizard tower dungeon, one with a live wizard inside.  Not an abandoned structure, but a living one.

I think that sounds like a great idea.  I could really use a random wizard tower, too.  They're awful easy to plop down on one's map.

Here's the tower of Khazan Khiraj, the Machinist.  He's a wizard who makes a lot of mechanically animated shit, and loves improving living animals.  The tower is called the Spire of Righteous Verticality.  Khazan Khiraj is fond of claiming that it stands straighter than any other tower in the world. 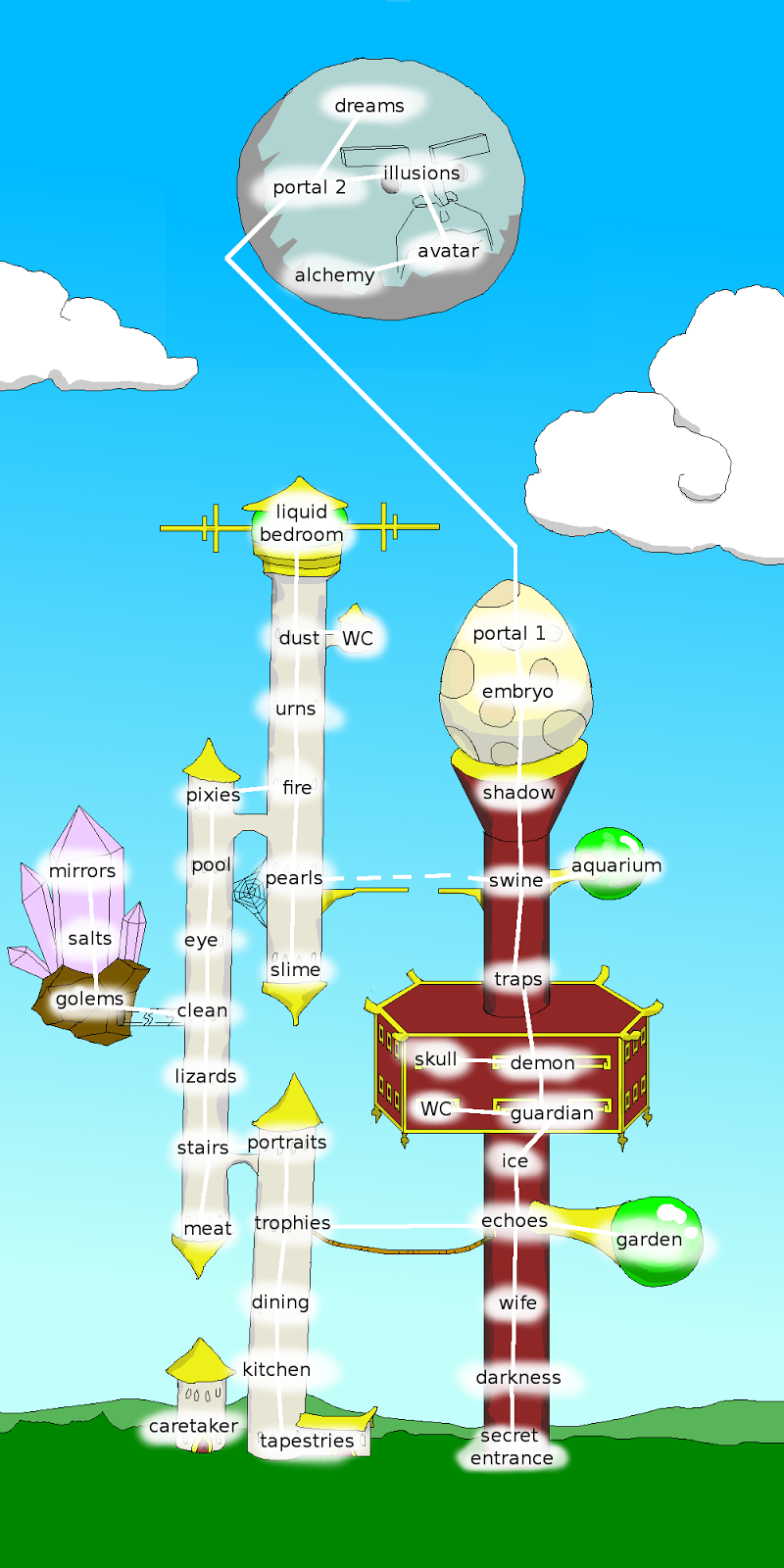 He is currently in his artificial moon, putting the final touches on his new body, which he plans to transmigrate his soul into very soon.  It's very fragile work--the tiniest distraction could ruin the whole thing--and so he's sealed the moon off from all distractions, so nothing will rouse him except for the direst of alarms (or if the party teleports into the moon, themselves).

SO!  Help me fill out this wizard tower.  This place depends on YOU.

I'll give a list of the rooms, and you can fill out the descriptions.  This is sort of intended to be a place that you can bust in and rob while the wizard is distracted, but fill it out however you want.

I'm going to post this on G+, since 90% of all the comments/discussion seems to take place there, but if you can't/don't want to post there, I'll reserve some rooms for filling out here, namely:

Here's an example of how they should be filled out.  (number) (room name) Description.  Please go in order, so we don't get confused.

7 MEAT This is where Khazan disposes the meat that he strips from his experiments.  An otyugh (with wheels for legs) lurks in this room, unable to climb the stairs.  It is enchanted to smell like lilacs and pile garbage/bones into tidy piles.  It is domesticated, but if the PCs knock over its bone piles or menace it with weapons, it will attack.  It will fall asleep instantly if it ever hears the word, "apsa", which  means "meat" in Elvish.

8 STAIRS Stairwell landing has a stuffed sloth-bear on a pedestal, holding a small lantern in each of it's claws.  The sloth-bear has a magic mouth cast on it, and will speak when the PCs approach, saying "Greedy eyes will never gaze upon the wonders of Khazan.  Wisdom only comes to those who do not seek it."  It's a clue to the staircase.  Unless a PC closes their eyes while on the stairs, the staircase will loop back around to the landing, trapping them there.  (Khazan is immune to this, natch.)

I also intend to do a random encounter table.  Feel free to come up with a random encounter, aside from the room descriptions.  Worst thing that can happen is we get a bunch of cool encounters.
Random Encounter #1: 1d6+3 berserkers arrive on pterodactyls, intent on robbing the tower.
Random Encounter #2: 1d4+2 giant spiders, they're the size of loyal hounds, act like loyal hounds, covered in an extremely soft purple fur, and will launch hit-and-run attacks from the outside of the towers.

And here's a version that you can show your players: 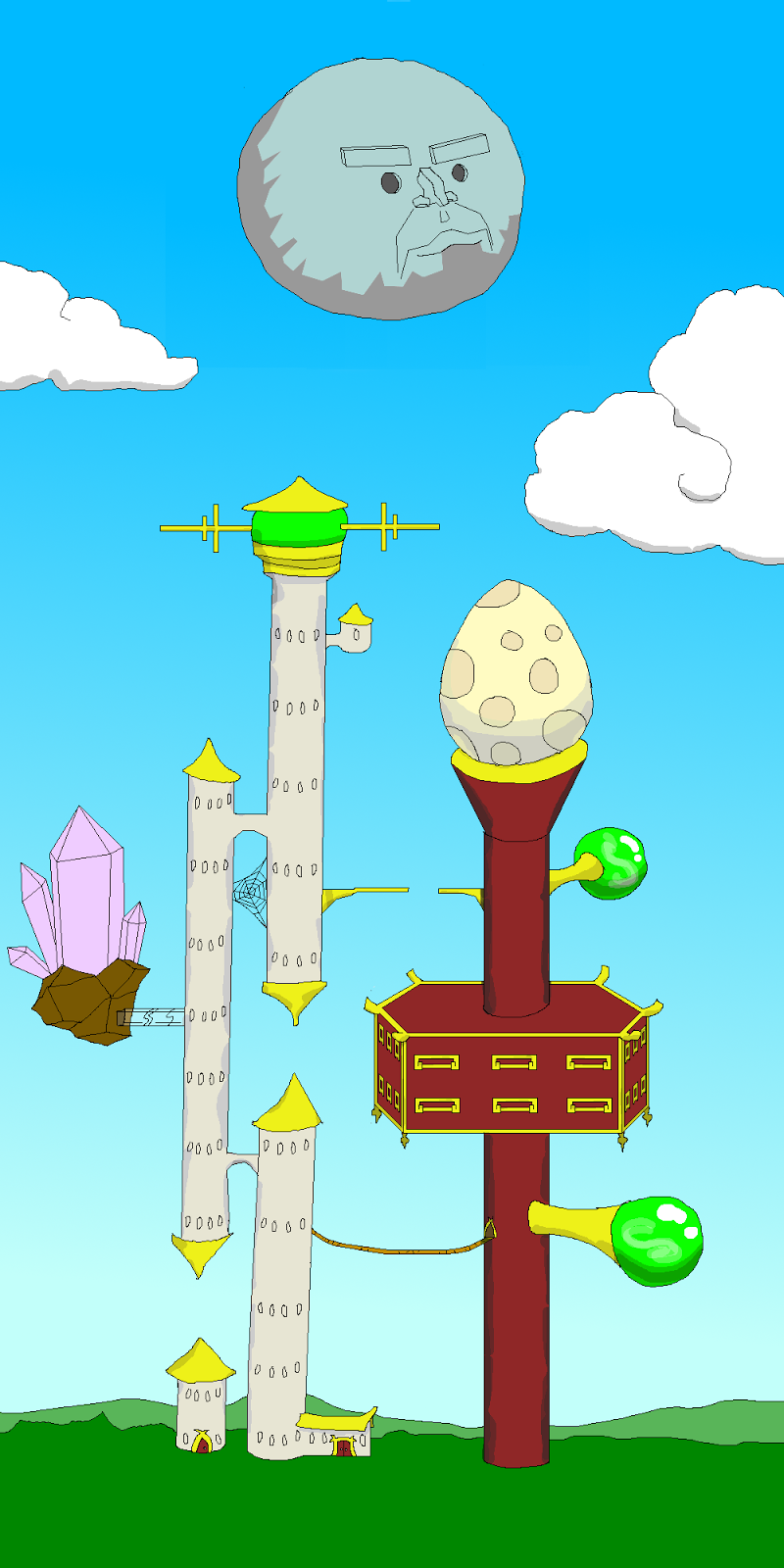 UPDATE: These are the rooms that have been done so far:

1 CARETAKER: This is the home of Bartleby and Bossic, the caretaker of Khazan's tower.  Bartleby was once a singular human, until Khazan cut off his head and put some propellers and mechanical manipulators on it.  He flies around, cleans the tower, and interacts with visitors.
Bossic is Bartleby's old body.  After cutting off his head, Khazan implanted a silver-plated psuedo-golem head on it, creating a new flesh-and-metal servant.  Rather than look freakish, it looks quite refined.
Bossic-the-pseudogolem cannot talk, but communicates by showing the most relevant page of a 30-page phrasebook of common responses.  It usually cleans and cooks.
This operation was done to reward Bartleby for his years of service.  Bartleby is a little over sixty years old and quite loyal to the wizard.  He keeps half a dozen cats, and grows sunflowers beside his small, 2-story cottage-tower.  He is also a secret opium addict and keeps his stash in a snuff box on the mantle.
At any given time, one of the two caretakers is in the mansion, while the other remains at home (determine randomly).  Bartleby has knowledge of all rooms 1-8, but is very loyal to his master, and very insulting to other wizards.﻿
-------------------------------------------------------------
2 TAPESTRIES: This (front) door to this room is usually locked with a large iron key.  Bartleby and Bossic both carry a spare.
This room contains three large tapestries and an elaborate chandelier, as well as a small golden timepiece on a tiny table.
The tapestries show Khazan Khiraj in some of his greatest moments of triumph: defeating the harpies of Bladewing Pass, seducing a succubus on top of a church (Khiraj is a famous blasphemer), and speaking with the God Machine in the astral sea.
The golden timepiece is valuable and nonmagical, but it is still a trap designed to kill thieves.  If it or any of the tapestries are removed from their places, the chandelier will animate, drop down, and attack like a radiant mantis made of steel and crystal.  It will also emit metal shrieks (a mundane alarm), activate the guardian in room #29 (a magical alarm), and the tapestries will all shout imprecations and threats for a couple of rounds.﻿
-----------------------------------------------------------------------------
3 KITCHEN: This is a large but surprisingly mundane kichen.  Fill it with pans and flour and fruit and a cast iron oven in the shape of a pig.  The only thing out of the ordinary is a tiny packet of black lotus poison in the back of the pantry.  Khazan Khiraj is immune to black lotus poison.﻿