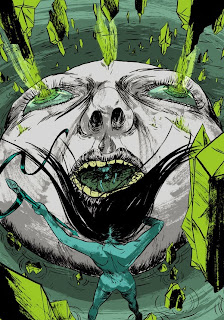 Okay, I love my Pathfinder group and I love Pathfinder. It's very different from OD&D, but there's a lot there if everyone loves crunchy combat and character builds.

Today's session was 5 hours.  The first four of which were composed of paying the dracolich the corpse(s) of the wizard they promised him years ago, learning of the imminent destruction of their neighborhood via planetary bombardment (exawatt lasers softening the planet's crust so that the orbital bombs could reach the magma) in exactly 37 minutes, dodging jury-rigged rocket sled booby traps, finding some spools of plastic sheeting (and completely missing how much it would be worth in a planet who had never seen plastic before), and sacrificing 3 summoned monkeys in the name of safety. . .


. . . the party spent over one hour IRL discussing where to go next.  I'm not accounting for digressions and beer, just time spent mulling over their choices.

The choice was between (a) bugging the fuck out of the dungeon entirely, (b) investigating a copper-skinned golem that mirrored their movements and bore some resemblance to the prism golems that had prison shanked the party earlier with their prismatic sprays and laser reflections, and (c) the incredibly ominous missile silo.

The missile silo was abandoned, but it had three levels that ran up 100' to the surface, where the unnatural snow reflected the hellish red lights in the sky.  In the center of the room was a massive hatch, with zig-zaggy teeth, absolutely laminated in protective runes and covered in fresh blood.  Around the room, on the tracks were a trio of 25' long gantry arms and a single autonomous chaingun.

Sensing treachery, the party shot the chain gun with the first laser gun they had ever owned (attained last session).  A groan sounded out from beneath the earth, and the chaingun visibly flinched.  From beneath its metal plates, the chaingun bled visibly into the snow as it sped along its rails to a place where it couldn't be shot by the party.  The robot arms followed suit.  The groan beneath the missile silo turned into a snarl.

They're trying to destroy some energy source McGuffin, so that the doom cult turncoat will be forced to land his ancient war machine and the aliens won't be forced to glass the surface of the planet.  This is so they'll have time to rescue the king of Mondaloa, who is trapped in a time loop somewhere else in the dungeon.  (They've watched him stagger in and die horribly, digested by green slime.  This has happened several times, always from the same part of the dungeon, but they need more time if they want to investigate.  They need more time!)

(The skies above Duscuro are home to a population of flesh-brain satellites that have watched over the planet for millennia.  They get married, birth their children into slick metal shells, and spend most of their lives in cyberspace.  The king of these satellites is called Throne, and he rules his orbital domain with an iron antennae.  Dissenters and traitors are hurled from orbit, and die weeping within their metal shells as they are immolated within the atmosphere.  Throne is basically a big box full of nuclear warheads, engineered plagues, and memetic infector-assimilators.)

(There's also the knowledge that the cultists have been trying to utilize alien technologies, and have built several AIs to do the task for them.  Not having a full understanding of how to program an AI, they just heavily altered some bound demons and smashed them into some hardware.  One of these demonic disk operating systems, Deimos, has already been subverted to the PCs cause with a goddam natural 20 on a goddam lucky roll.  They've had fun carrying around his techno-crucified hell-corpse and plugging it into different machines, with varied success.  But they know almost nothing about the other demon AI, Phobos, except that he was a Balor before his neural pruning, and now controls the silo.)

Man, that sounds a lot weirder when I type it all out.

But I assure you, it was quite a normal campaign when we started, save for the occasional alien sighting or reference to dragons as the Planetary Calibrators.

Anyway, they just sat and talked about what they wanted to do for an hour and a half.

To be fair, their resources are stretched thinner than milk on toast.  They've already killed two boss-type monsters today in two different planes (over the course of what, like 2 months IRL?) and honestly, I've been slathering on the impending doom.  It's no wonder they feel stressed.

And if they abandon this place to get nuked, they will lose a friend or two in the process, but then we get to travel on to stranger places.  The Dragon Engineering labs in the desert of Ravadoon, negotiations with the pseudo-elven aliens for the fate of their planet, or assault the interiors of dissociative, fiftieth-generation, flesh-brain, satellite tyrants.
Posted by Arnold K at 6:38 PM