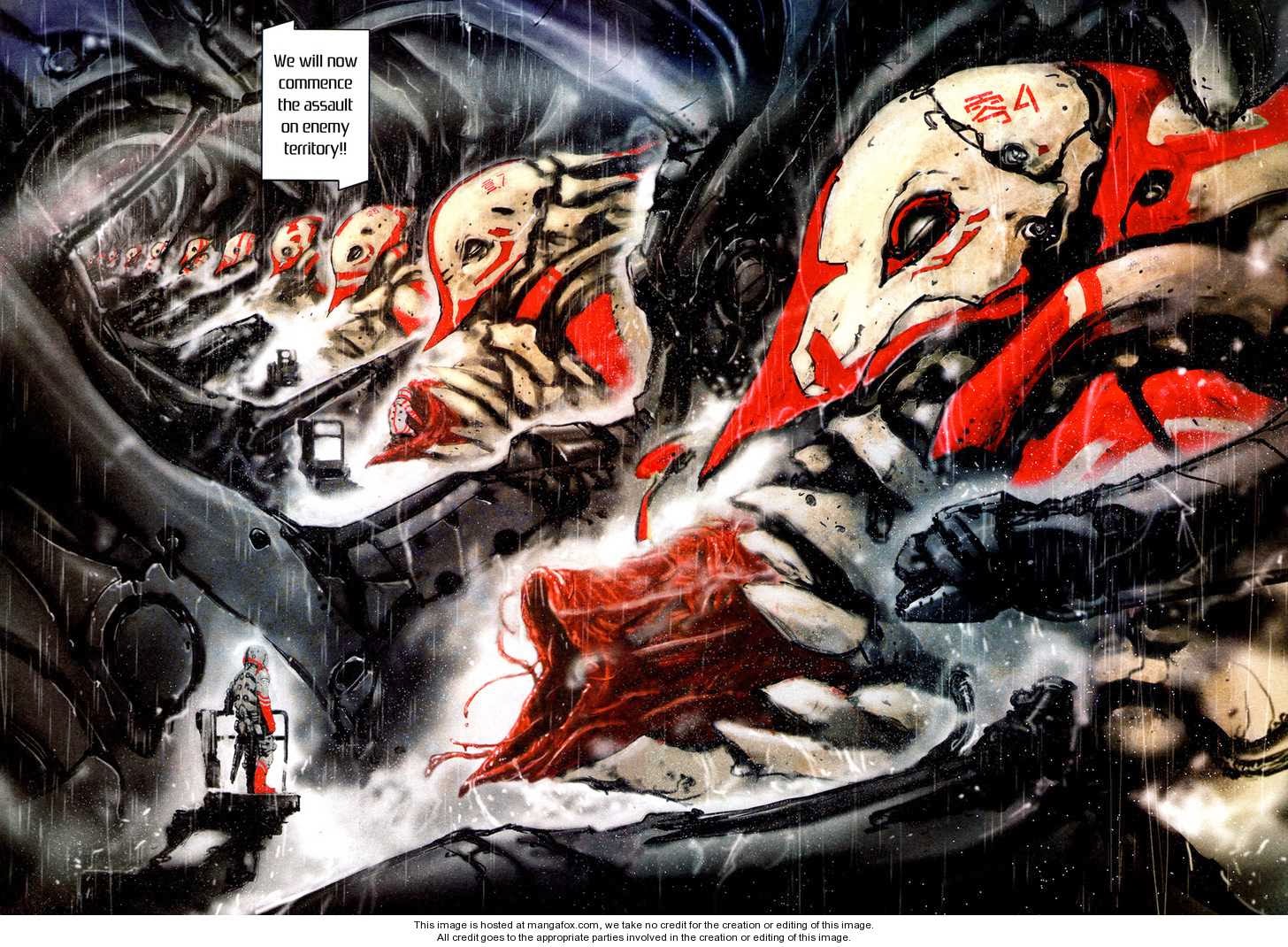 Religion Aboard the Axis Mundi

The human brain evolved for an environment that is very far from the one that it finds itself in.  In some ways, faith is a response to that stress.

Humans aboard the Axis Mundi live in a world without a learnable history, or a constant geography.  In some ways, faith is a response to that ambiguity.

Not everyone thinks that the AIs are greek gods.  Many people believe that they are both gods and AIs, because in their minds, these are almost identical concepts.

No one has any idea of how computers work.  The concepts involved (quantum computing, positronics) are so far beyond anything they (or we) are familiar with, that it would take a lifetime to comprehend.  Computers make computers, and computers make electronics.  They don't even use human-readable languages anymore.  There's no HTML or C++ inside computers anymore, or anything that your eyeballs could parse.  There's just math.

There are a lot of itinerant preachers.  They are remnants, all of them, and most are loathe to kill the last of a god's faithful.  It invites disaster. 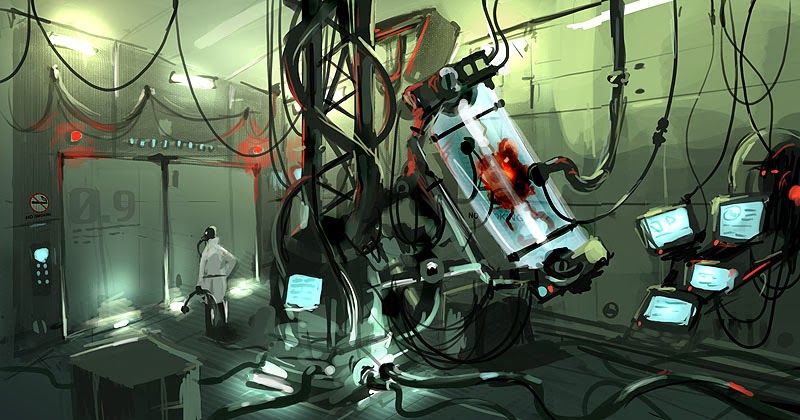 Biology Aboard the Axis Mundi

No one aboard the Axis Mundi is ever struck down by a cold.  HIV was cured several millenia ago.  Disease is dead.

Or at least, natural disease is.  Thousands of engineered plagues have been created and released over the Axis's history.  Some cripple, some mutate, some cause catatonia.  Most kill outright.  Using exotic metabolic pathways and symbiotic nanobots, they do this with speeds that would seem impossible to a 21st century human.

Nothing rots.  There is nothing that can rot a corpse.  The ancient dead instead congeal, fade, and blend into intermediate substances.  When a centuries-old battleground is rediscovered, it is usually eaten.

Gaia holds the genetic sequences for a number of agricultural species, as well as vast amounts of metadata for species that were deemed to be of agricultural or cultural worth.  For this reason, she has pig- and cat-hybrids, but no frog-men, nor lions.

All of the monsters aboard the Axis Mundi (and there are quite a few) are products of Gaia's experimentation and development programs.  And because her directives prevent her from working on goals that are not symmetrical to human interests, most of her work is on humans. She is also prevented from bifurcating the species.  Humanity doesn't want anything to fragment it's unity.

So all of the monsters aboard the Axis Mundi were originally created from human stock.  Everything has 23 chromosomes.  So rest assured that no matter what sort of strange beast you encounter, you can probably fuck it.

You can fuck some of the "robots" (there's a person inside, more or less).

You can fuck the membranous psychoplasms (still a person, though they lack a face or bones).

You can definitely fuck the goat-people.  (Was there any doubt?)

You can fuck the zo-mantises (though this will probably require the violent removal of sections of their exoskeleton, but that's part of their mating ritual anyway).

You can fuck the naga (and everyone wants to--just be careful, they bruise easily).

Is the Minotaur real?  Of course he is.  The current Minotaur (the 303rd one in an esteemed lineage) serves Gaia as both systems analyst (computer maintenance is a sacred duty) and head executioner (you should see his axe). His name is Samuel Beckett.  His wife is a temple maiden to Gaia and his skull has been completely replaced with titanium-ceramic alloys.  He has killed 55 time (usually by impalement or bisection) and has an IQ of 211. 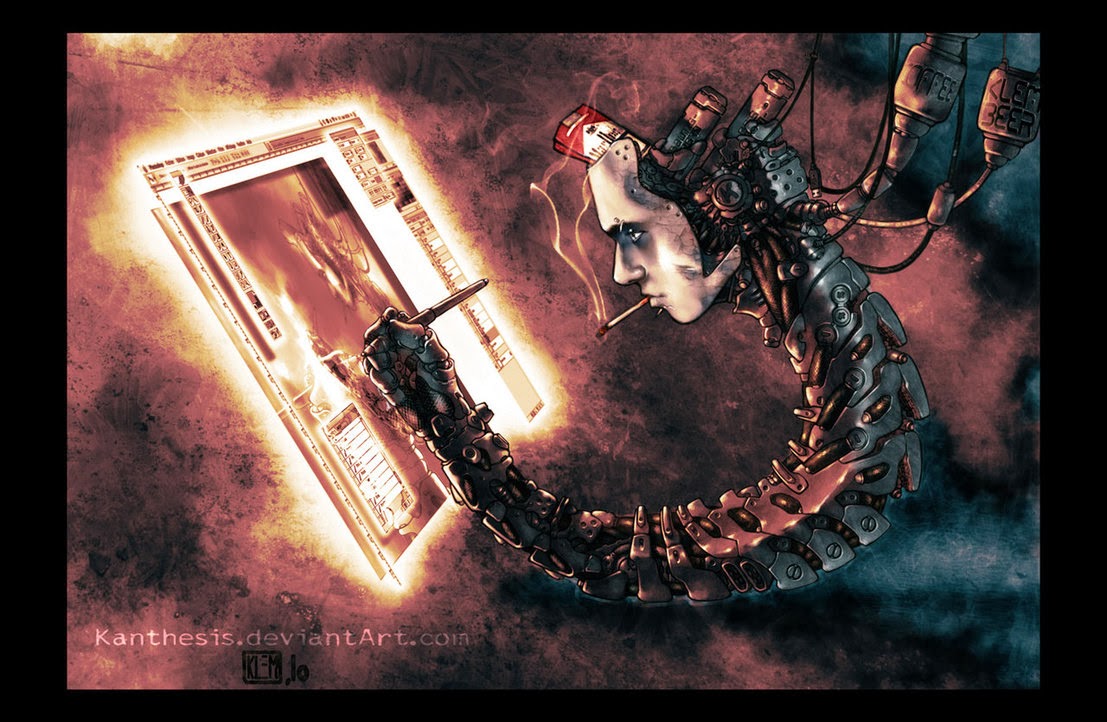 3.
He activates the air jets on his helmet.  The curtain of air will keep the floating globules of blood from landing on his visor, at least until the intakes clog.

The corpses of the goat-men are still venting blood.  Fat globules that puddle together and glom onto the walls.  Their stiff black bristles fill the air here.  Dust doesn't settle in zero gravity, and so the air is filled with drifting motes of filth, some quite large.    Like the water in a dirty fish tank.  A green haze fills the air, a spore cocktail generated by the ascobascidial laboratories another deck lower.

He spends a minute putting bullets into the goat men and checking his companions. He is alone down here, on deck 74.

The goddess walks around the corner.  There's no gravity, but she walks along one of the walls nonetheless.  Her golden hair flares out into a halo around her head, and her white dress is untouched by the grime that fills the hallway.

The soldier screams and opens up on full automatic.  Bullets pass through her and ricochet off the bulkhead behind her.  She frowns.

The goddess speaks to his animal brain.  The part that doesn't understand any emotion except hunger and pain.  That doesn't know any color except red.  The words mesh his brainstem in mimetic chains, and the soldier stops firing.

Gaia approaches.  Immaculate fingers flick open the clasps on his helmet.  Warning chimes begin going off inside his helmet.  The atmosphere is not safe to breathe.

One of the soldier's hands comes up to touch hers.  Not to stop her, but just to caress it.  Then the helmet is off, jetting softly away down the corridor on a stream of cool air, and the goddess gets a good look at the soldier's face.

He's just a boy, probably not older than sixteen or seventeen.  One of the star-worshipers from the generator levels, it looks like.  He has mild acne.  Between his lower lip and his jaw, a line of triangles are tattooed.  (The star-worshipers used an ink made from urine and rubber for this, she knew.)  An AR interface has been socketed into his left eye, and she can see her radiant hair reflected in its lens.  A trepanation has been drilled into his forehead, in order for him to see gods and spirits.  He is beginning to wheeze, laboring to breathe in the broth that passes for air down here.

She kisses him.  It is a long kiss, and he does not resist.

A minute later, and he is too weak to breathe through his nose, and so she allows him to drift a short distance away.

Another minute, and his breathing has ceased.  Yellow mycelia are fruiting through the surface of his skin.  The goddess' halo glows invisibly, and her UV codes instruct and fatten the vegetation that is consuming the young soldier's body.

Finally, his corpse flowers into a radial fungus that quickly produces a flock of red hibiscus.  She picks one and places it behind her ear.  The flower is beautiful. 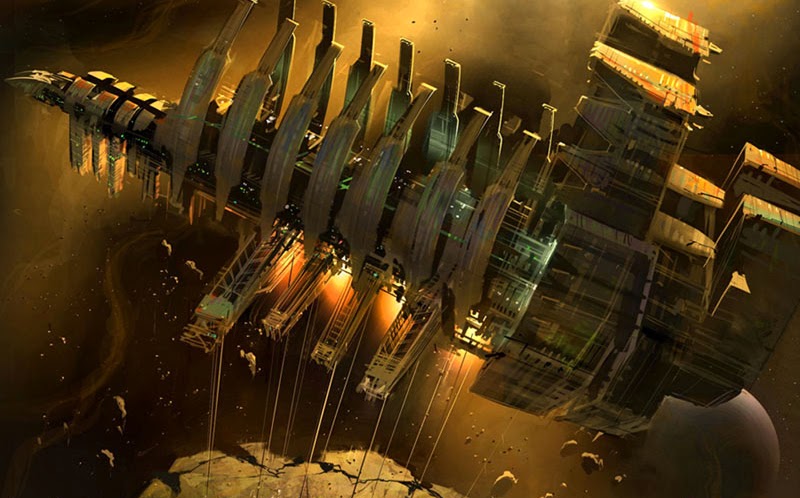