This is a continuation of a previous post about monastic wizard orders.

Basically, nearly every wizard in Centerra belongs to a wizarding tradition.  Sometimes these are magical academies (big, powerful, political) but most of the time they are monastic enclaves (small, weird, traditional). 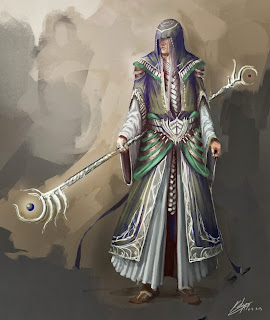 The Monastery Under the Hill

Wizards From Under The Hill adore elves and seek to emulate them in all ways.  They dress in soft, undyed silks and drink plum wine. They mutilate their ears into points, and starve themselves that might better approximate the famous slenderness of the elves. Similarly, they fetishize youth and beauty.

They live in a monastery called Oakenhome, which is entirely ensconced inside a large, round hill.  A mighty oak grows on top of the tree, with a small tree-house hidden in it's branches.  The Wizards From Under the Hill uses this treehouse for their most important rituals and magics. 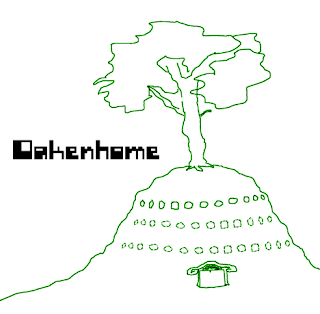 Wizards From Under the Hill are staunch elf apologists, and deny most of the historical atrocities of the elves.  They cast spells by flicking a pinch of powder into the air.  This powder is mostly marble, but it also includes a little bit of elf skull.  The bit about the elf skull is a closely-guarded secret: everyone thinks its just marble.

They adventure to meet elves, recover elven artifacts, and discover new spells. The Wizards Under the Hill place a special importance on sharing wine, and even adventuring wizards will receive (via mail) a steady supply of wines, cordials, and fruit brandies (and be expected to send some back in return).

Observances
- Usually hold elves and elven virtues as superior in all things.
- Usually dress like an elf.
- Must speak in either Elvish or in rhyme.
- Must use a pinch of their oakenpowder whenever they cast a spell.

Level 1 Wizard-From-Under-the-Hill Spell List:
Beautify
Touched creature or object is made more beautiful. Dirt falls away, pimples disappears, teeth whiten, lice vanish, gouges fill in, and varnish looks new again.  This is permanent.  If Charisma has temporary damage, this will also restore 1d4 points, up to the normal maximum.

Blossom
Touched plant flourishes.  Seeds germinate, flowerbuds swell and bloom, and a sickly plant regains vigor.  Heals 1d6+1 hp to a plant creature.  If cast on a fruit, the fruit will grow up to the maximum normal size or 2x as big (whichever is smaller).  Yes, you can use this to double your rations, as long as your rations are fruit or vegetables.

Illusion of Youth
Touched creature is cloaked with an illusion that makes them appear to be in their physical prime.  Lasts 1 day/caster level.

Unseen Orchestra
For 10 minutes per caster level, you are surrounded by the harmonious sounds of a five-piece band.  This is otherwise like the spell unseen servant.  The exact instruments vary from wizard to wizard, and the unseen band can play any song you've heard before.  It cannot duplicate voice.  You can also opt to center the effect on an adjacent location, rather than on yourself. 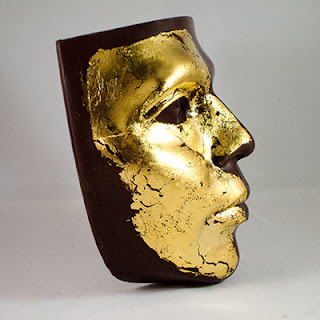 The Gilded Wizards of Asria cover themselves in golden body paint, red silks, and ruby mij (jewelry that are visibly embedded in the skull of a wizard, over their third, spiritual eye). Many of them carry matching rapiers with ivory handles. They wear togas (unbleached, white, or red, depending on rank).  They have a reputation for homosexuality and secrecy.  They cast spells with their saliva, usually by spitting.

Their center of power is the Pillar of Questions, a small monastery in the foothills of Asria with a large, visible spire.  They also control the Zelvion healing spring, 50 miles away.

They are especially interested in recovering things from ancient ruins, specifically cultural ones (especially plays or poetry) and bound demons (imcorporated into magical objects).  The plays are performed in the Pillar of Questions in front of private audiences, and the demons are usually studied, then destroyed.  Unlike other magic users, the Gilded Wizards rarely use demons in their work, condemning the practice as dangerous and unnecessary.

They adventure to recover cultural artifacts or demons.  They are expected to check back in to the Pillar of Questions when possible (where they will be greeted with warmth and hospitality) and recount their journeys in the form of a play (and hopefully having their companions perform their own roles).  If suitably entertaining, these performances are usually rewarded with gifts of wine and gold (award XP as loot).

Observances
- Cannot cast spells unless covered in gold bodypaint or at least wearing a gold mask.
- Cannot cast spells if they cannot spit or generate saliva (e.g. dehydration).
- Cannot employ demons, angels, or spirits except in matters of life and death.
- Must never wield a blunt weapon (includes your fists).

Special Ability: Gold Power
Your base saving throw is not determined by level, but rather by how expensive your outfit is.  Only jewelry and vanity clothing counts toward this total (functional/useful items don't).  Talk to your DM to determine appropriate levels of wealth for your campaign.  Additionally, if you are ever wearing a truly ludicrous amount of treasure (say, 40 lbs of intricate goldwork plus gemstones) you get +1 to your caster level.

Detect Gold
Like all the other detect spells.  The spell name is misleading--this spell simultaneously allows you to identify all precious metals.

Powerful Presence
The caster seems to grow in magnificence and poise.  For 1 hour/caster level, you get +2 to save vs domination/charm and +1 to reaction rolls (as if from a high charisma).

Spit Poison
If  you are poisoned, you can choose to cast this spell instead of making a save.  If you do, you draw the poison into your mouth, where you can safely spit it out (or hold it--just don't swallow). 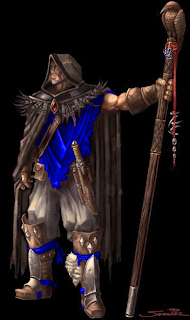 School of Black Paper
In the black karst hills of west Keldon, the School of Black Paper faces outward like a row of eyes.  These are the balconies of Bossenstone Monastery, fifty feet off the ground. This is one of the more severe monasteries, and acolytes can expect to spend years mopping floors and practicing meditations before ever being allowed to learn a spell. It's also one of the monasteries with a large civilian population, and most of the mundane aspects of running the monastery are performed by stewards, the castellan, or the mistress of novices.

They are also one of the more political monasteries, and have many tight connections with the current government in Keldon. Formerly, the king used the Wizards of Black Paper to hunt down rogue wizards and supporters of the former regime. However, the days of using wizards for political assassinations at the behest of the king are largely behind the school, and recent years have shown that the monastery divided between factions that wish to continue supporting of the regency through direct means and those who desire a "purer" study of wizardry.

The School of Black Paper has its roots in a much older wizarding tradition called the Great Raven.  All of the practitioners of that former tradition vanished simultaneously, leaving all of their artifacts and resources.  The murky origin of the Black Paper involves the king's edict, the redistribution of the artifacts, the hasty construction of Bossenstone monastery, and the abandonment of the Great Raven monastery (tainted by a curse some say, or perhaps demonsign).

They hold the secret of smokepaper, which they use as an alternative to potions.  Smoke is collected, and magically bound into a square of black paper, about 4" to side.  When the paper is torn, the whole square gently puffs into a square of smoke, which is then inhaled to get its effects.  Smokepaper is prized because of its lightness and durability (usually protected inside a metal case).

Wizards of Black Paper usually go adventuring to keep their nation safe.  Town guards and authority figures usually don't hesitate to approach a Wizard of Black Paper if they need help, but people with ties to criminal elements regard them in the same light as a police force.

Special Ability: Raven Form
Once per day, can turn into a raven for up to 4 hours.  As a raven, you have all the physical stats of a raven and cannot cast spells.  Additionally, they can make black paper instead of potions.

Command Ink
If you command ink "come with me", it will liquify and run into a container of your choice.  A second casting of this spell ("as you were") will restore it.  If you command ink "disguise yourself" it will rearrange the letters to disguise the contents (although it will sometimes mispell things, as ink isn't too smart).  A second casting "reveal yourself" will undo this last change.

Deadly Quill
You can cast this spell as a free action (it takes a negligible amount of time).  A held feather becomes as sharp and rigid as steel.  Treat this as a dagger (unless you have a truly big feather, then it might be a shortsword or rapier or something).  If it is thrown, you get +4 to hit and this ends the spell.  Otherwise it will last for 10 minutes per caster level.

Feather Fall
If you would take fall damage, you can cast this spell instead to negate it.  (Declare this before the amount of fall damage is announced.)

Lightning Strike
A vertical lightning bolt strikes a target within 100'.  This does 2d6 damage per caster level (max 5d6), save for half.  This spell only works if the target is outdoors with a clear view of the sky while it is raining.

Passdoor
You can step through a door that is no thicker than 6".  This spell has no effect on things that aren't doors (like walls, for example).