Six Pirates and a Bird

Six more pirates to go with the last twelve. 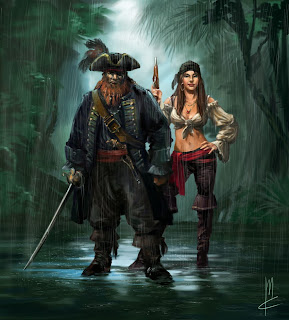 13. Queen Zio Zalavendi
Rumored to be an actual queen from the darklands, Queen Zio is a darklander, and is said to be beautiful in the darklander way (teeth dyed black and filed to points, elegant pink scars framing her eyes, constantly erect nipples). Her ship is a worm-rigged galleon with a worm stable beneath the waterline. It's 50'-long otterworms can pull the ship through doldrums or they can be mounted by her crew to form sea-cavalry. She has a small fleet of three other ships, and has a terrific rivalry with Captain Calico Kill, the self-professed “Pirate Queen”. It's rare for the pirates to hold court without one trying to kill another. Her ship is The Ulula and her flag is a double-ended trident.

14. The Green Lady
She (it) is a sludge vampire. That's all you really need to know about her. Her ship's masthead is the head and shoulders of a taxidermied elephant (that she supposedly drained herself). She is fantastically beautiful (shapeshifters always are) and dabbles in poisons and alchemies belowdecks. Many of the multi-colored gases are highly toxic, and so are vented through the masts, which are hollow. Her ship is The Lucky Gardener (referencing a well-known dirty joke) and her flag is an elephant's head. 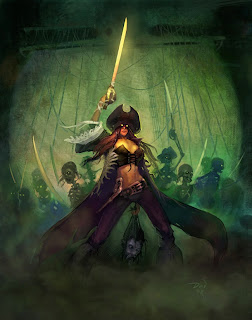 15. Muromar “Murder” Redhand
An imposing man (Bashani), Muromar was a highwayman who originally turned to piracy in order to escape pursuit. His ship was stolen from the Church of Hesaya, who desperately wants it recovered. It is an ironclad, and is powered by both sails (when the wind is good) and a pair of holy golems (when the wind isn't). Ol' Murder is in his fifties now, and in battle he wears a suit of golden fullplate studded with gems—most of his fortune. If he ever fell overboard, he would sink like a stone, but the vast fortune attached to him means that few people are willing to do it. Even his enemies have saved his life in order to save his fortune. His ship has been renamed The Adamantine Ogre and his flag is an open gauntlet holding a coin.

16. Long-eared Jack
He is an elf! (Elves are almost as rare as true humans, so this is a big deal.) He is fond of raiding wizard's for their apprentices, and his ship is impregnated with dozens of subtle enchantments. It appears to be made of spun sugar and leaves pale “footprints” in its wake. Hundreds of elven ashakka hover in the air around the ship (coke can-sized pieces of wood used as foci for spells), and it is even said that he can summon demons or direct leviathans to attack his enemies. His ship is called The End of Summer and his flag is a long red pennant bisected by a white line. 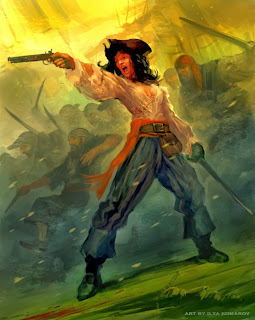 17. Casma and Aslo
They are a pair of twins (Meduran), one male and one female. And except for Casma's green eyeshadow, they look exactly the same. They stole their ship from a powerful merchant prince in Kathar and escaped to the open ocean. The ship is a landship, and sails equally well over water as it does over land. Although it is not fast, this is still a huge advantage. They are both inveterate gamblers, and love to make bets with their prey, their hunters, each other, and absolutely everyone. Their crew is mostly dwarves. Their ship is called The Flying Trilobite and their flag is a black mountain rising out of a cloud.

18. Painkiller Jane
A Nothic woman (Gilean) who has decorated her fast frigate with wrought iron and lanterns. Rumor has it that she used to be a doctor (she has a doctor's tattoo beneath her eye, a wren). They also say that she feels no pain or emotions. They also say that the map tattooed on her back will lead to a cursed island where she buried her heart. She uses poisonous gases extensively, and her crew wear gas masks. She is also dabbles in magic, and can strobe her lanterns, causing confusion in her enemies. A surgeonbird perches obediently on her shoulder. Her ship is called The Heartless Beast and her flag is a skeleton upon a rack. 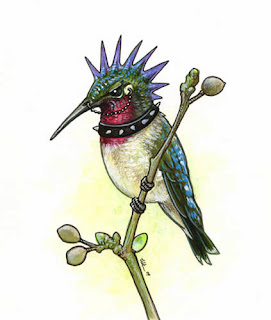 Surgeonbirds are small, hummingbird-like avians that fulfill the same ecological niche as mosquitoes (or stirges). They are about the size of a man's fist, plus wings, and they must feed on blood to survive (although they supplement their diet with fruit and nectar at times). Unlike hummingbirds they are a glossy black color with only a few white feathers that ring their large eyes, giving them a sort of owlish face (they are similarly nocturnal). They are a common pest in certain areas, like the salt swamps. They are especially known for plaguing herds of cattle--a flock of surgeonbirds can leave a hundred cows anemic and half-dead if nothing is done about them.

Surgeonbirds have long, needle-like beaks that they use to draw blood from their prey. Like mosquitoes, surgeonbirds also have an anesthetizing substance: their tears. Surgeonbirds weep onto the skin of their prey in order to make it numb by letting the tears run down their beaks. They hover while feeding. Surgeonbirds can easily suck a couple of ounces of blood from a human. If a sleeping human gets several bites in the night, they may wake up feeling faint and weak. Consecutive nights will easily kill a man.

Poets love them, and they are a cliche metaphor for unrequited love.

In the wild, surgeonbirds can grow to be quite large (perhaps the size of two large fists). Larger surgeonbirds can move faster than younger ones, and sometimes flocks containing many larger surgeonbirds will not bother with stealth or anesthesia, but rather mob the unfortunate victim en masse, all simultaneously distracting their prey while other birds seize opportunities to dash in, draw a quick pull of blood with their stilletto-like beak, and leave the prey to bleed. If the prey cannot quickly escape or find a way to deter the flock of ravenous surgeonbirds, the prey may find itself quickly dying from dozens of tiny puncture wounds. Surgeonbirds have no aversion to drinking spilled blood.

Back in civilization, surgeonbirds are often used by doctors, in order to take advantage of the known advantages of controlled bloodletting. The surgeonbirds that doctors use are small and well-trained to ensure that no discomfort comes to the patient. Surgeons also use the birds to provide local anesthesia for minor surgeries. In Asria and Meltheria, doctors sometimes carry a surgeonbird in the head of their staffs, which has a sort of miniature birdcage attached to it. In fact, during times of plague, doctors along the eastern coast traditionally wear plague masks that resemble the heads of surgeonbirds. These plague masks operate on the known principle that plagues spread through bad air, and by breathing through the perfumed beak, a doctor may be spared the infection. 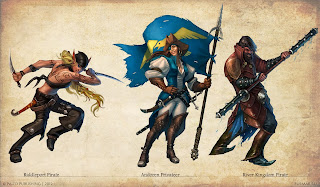