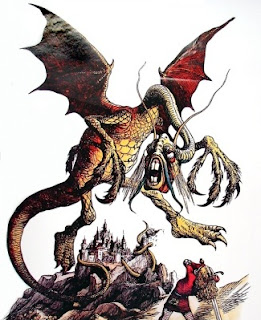 The Jabberwocky is the Questing Beast.  There have been many questing beasts, and there will perhaps be more once the Jabberwocky is slain.  There are many places where it might live, but in Centerra, it lives in the Riddlewood, near Travia.

DMs: Put it on any random encounter table you wish, as long as it is on a forest, mountain, or swamp hex.

Inform your players of this.  Everyone has heard of the jabberwocky, and everyone knows that if you pass up a chance to hunt it, you will never have another chance.  A questing beast only appears once to any given person, if ever.

If the party abandons the trail for more than one day, they lose it, and will never again encounter the jabberwocky. 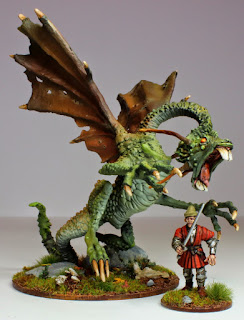 What Everyone Knows About the Jabberwocky

Tell your players this the first time they hear the jabberwocky's burbling.

How the Jabberwocky Moves

If you want to know the jabberwocky's route through the hexes, look at this table.

If this path would take it out of a forest, mountain, swamp, or jungle hex, the jabberwocky changes direction randomly in order to stay in those types of hexes.  It avoids doubling directly back on its path, if possible.  This direction is the new "straight ahead"

How the Jabberwocky is Encountered

So, I use a lot of the numbers on a random encounter die (more about it here).

If the party is pursing the jabberwocky, they have a 1-in-3 chance to bump into a quest event every time they roll a random encounter check (twice per day).

If you're using two random encounters per day, the party will be bumping into one quest event every 1.5 days.  So the party might very well bump into the jabberwocky in less than a week of searching.  But given how the dice work, this is going to vary wildly.

The first two times you roll on the quest event table, you roll with a d12, so there is no chance of bumping into the jabberwocky.  But on subsequent rolls. . . you might.

And the first time the party bumps into the jabberwocky, it flees as soon as it gets below half health (see Whiffling Wings, below).  The party then encounters it automatically the next time they get a quest event, and this time it fights to the death.  So expect them to kill it after about 10 days of hex-crawling.  Maybe.  Again: highly variable. 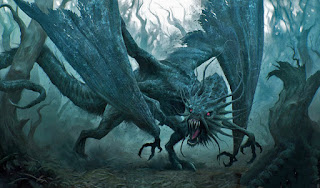 Some of these are framed like moral tests.  They aren't.  The questing beast doesn't care if you're a sinner or saint.  However, nearly everyone believes that the questing beast can only be killed of someone who is pure of heart. 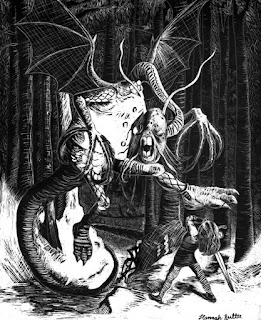 Vorpal Head Bitey - Free claws are used for grabby claw attacks (Str 20).  If the jabberwocky begins its turn holding a person, it will attempt to bite off their head with it's rat-like incisors (2d6 + save or die).  If it is holding a second person, it will merely shake them or bash them against the floor (2d6 damage).

Burning Eyes - At the beginning of the jabberwocky's turn, the jabberwocky picks a person in 50' to glare at.  If that person fails a save, they are blinded for 1 round.  Also applies to mounts that the target happens to be riding.  Creatures with darkvision automatically fail this save.

Whipping Tail - At the end of the jabberwocky's turn, it makes a free attack against all adjacent creatures for 1d6 damage, making an attack roll against each of them.  (It doesn't tail whip anyone it's holding.)

Burbling - The jabberwocky's mad burbling is infectious.  All creatures in 50' constantly babble nonsensically.  Basically, you lose control of your mouth (no save).  The DM should feel free to tell each player what their character is babbling about each round.  (I recommend something from Lewis Carroll).  Spellcasting is impossible.  This babbling madness extends to the players, not just the characters.  The physical players around your table (whose characters are within 50' of the jabberwocky) are forbidden from speaking except in nonsense noises ("Eeeoooflorporflibbity boo!"), declarations of what their character is doing ("I want to throw my net on the jabberwocky."), or questions about the situation ("Is the jabberwocky close enough for me to hit it with the net?")  Pantomiming is also forbidden, unless the player wants to spend their character's next turn waving their arms around.  Players who break this rule are assumed to be pantomiming stuff, and lose their next turn.

Whiffling Wings - When the jabberwocky is reduced below half HP, it will throw away anyone it was holding (prone + dex check or take 1d6 fall damage) and fly away on its small, tattered wings.  This means that the hunt is nearing the end, and the next quest event will automatically be with the jabberwocky.  (Roll a d8+12 on the Quest Events table.)  The jabberwocky will only flee the first time; on subsequent fights, it will fight to the death.  The jabberwocky heals 1d8 HP the first time it flees and every night after that.