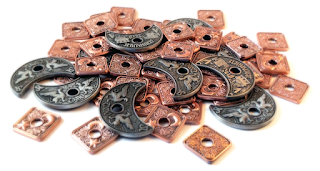 copper cubreks, brek, brekker, penny, thins.  1c is about what an unskilled laborer earns in a day.

silver shilavo, sil, shilling, lady, dallions.  1s is about what a very skill laborer (esteemed blacksmith)  earns in a day.

In the Darklands, they have their own standardized currency.  It has the same worth and the same abbreviations ('c', 's', and 'g') for simplicity's sake.  They are minted in Yog.

Blood Oaths (only officially recognized by orcs, but everyone else is wary to accept any)
Orcs use a negative currency.  Each orcish warchief incurs a debt to their hated gods in the process of a campaign (in exchange for divine miracles) and that debt is then passed on to their subjects.  Each blood oath is a promise to kill someone, and after a large campaign, each orc might find themselves with as many as two or three blood oaths.  These are traded ("Hey, take this horse and my blood oath") like money, and are inherited the same way.  This burden is considered spiritually binding.

Ceramic Plates (worth twice as much in Basharna)
These are literal plates, each one between one and three feet wide.  Each one has been painted with the words of a master calligrapher.  The values of these ceramic plates vary from plate to plate, depending on the antiquity and the skill of the master who first scribed them.  To learn the value, you must travel to Marlonai and look up the value of the plate in the great catalogues there.  Access to these catalogs costs money, of course.  Important payments and tributes must be payed in ceramic plates.

Hungry Gold
These gold coins were developed by ancient Arkah, as a method of transporting gold secretly.  Now, it is used for certain religious rites.  When touched, the coins turn into liquid and enter the veins of the person who touched them (where they take up one or more inventory slots).  In small amounts, they are undetectable, but in large amounts they cause the whites of the eyes to take on a golden sheen.  They can only be removed by casting remove curse, followed by exsanguination.  (It's also pretty inconvenient to find out that the cultist leader you just killed carried all of his wealth in his veins.)  Draining the blood also works, but as the blood congeals and spoils, the gold it contains turns to lead.

Dog Bones (worth twice as much in Fangol)
Banded with gold and thrice-blessed by a horse priest.

Elven Ancestors (worth twice a much to Elves)
Elves are known for treating their ancestors poorly.  (Each elf becomes the property of their children when they die; most of them intend to live forever, and are very death-averse.)  Elven ancestors are captured when they die and stuffed into a pseudo-golem: a long cylinder of wood about the size of a babies fist.  When a sleep spell is cast on the cylinder, it splits down the middle and reveals two flat interior sides.  One names the elf contained within, and the other side contains the elf's affiliation.  These are used as prestigious currency, but they can (in theory) also be used to power elven ghost golems.

Feroxite Spinning Ingots (worth twice as much in Asria)
There is a magical ore called feroxite.  It is used to make wands and staffs.  It is sometimes transported as ore, but is sometimes purified and cut down into small, conical ingots, each only about a kilogram.  Counterfeit ingots are impossible to make, because when a feroxite ingot is set on the floor, it stands on its "nose" and rotates like a top.

Filth (worthless except to filth goblins)
Some goblins, filth goblins, love garbage.  They buy it by the boatload.  The filthier the better.  Now, it is a non-trivial question if you have to compared a knotted pile of 24 shit-stained bedsheets with 100 rusty doorknobs and a charred zombie corpse.  Filth goblins have developed an intricate method of appraising, discussing, and predicting the value of things based on their origin, characteristics, and artistry.  It doesn't merit any more examination, but just know that goblins will sometimes pay top-dollar for a barge full of mouldering pie tins.

Gemspheres (worth twice as much in Meltheria)
Meltherian Wizards use spherical gemstones as currency.  This is because they are rich and ostentatious, and because spherical gems can be used in all manner of minor magic tricks.

Golden Cubes (worth constant)
It is known that dwarves do not mint coins.  Dwarves convert all of their wealth into gold at the first opportunity.  (They do not accept any currency except gold either.)  Then, all of their gold is melted down and fused together and used to make a single gold cube.  Each dwarf will own a single golden cube.  When they wish to trade, they shave pieces off their cube.  These have a constant price everywhere.

Dragon coins (worth constant?)
This is what happens to a normal coin when it remains in a single dragon's possession for too long.  Dragons hoard gold--they do not use it.  That same hoarding instinct is eventually imbued in the gold, which becomes home to a sympathetic spirit over the strange centuries.  Each coin changes gradually until it depicts a replica of the dragon.  (If coins have been added to a dragon's hoard over the years, you can see a spectrum of faces.  The most recent coins depict the local king, while the oldest coins show a dragon, and the intermediate coins show intermediate faces.)  Dragon coins are meant to be hoarded, not spent, and each gold coin has a 10% chance of turning to lead whenever it changes owners.

Hate Seeds (worth twice as much in the Darklands)
These are seeds from a poisonous tree.  They are used in a number of other poisons and have a long shelf-life.  When testing for counterfeits, suspected coins are fed to songbird, who literally melt to death if the currency is genuine.

Names (worth twice as much in Abasinia)
Administered by the Princemaker's Guild in Abasinia, Heavenly Names are simply titles that are attached to your soul.  These cannot be stolen; they can only be given willingly.  They are also immune to counterfeiting.  If you possess a Heavenly Name, you have but to announce it, and all who hear you will Know that you are speaking true.  It is a primal understanding on a fundamental level that cannot be imitated.  If you are not speaking your own Heavenly Name, it sounds like any other series of words.  There are also curse-names, that have a negative value.

Noserings (worth twice as much in the Frozen South)
Not only are noserings worn by warriors, they are also stripped from the battlefield dead (a tradition that is said to offset the cost of the war for the victor).  Defeated warrior ghosts are always seen with torn noses.  These nose rings are sometimes carried on a string, but they are more often woven into elaborate beard- and hair-braids.

Paper Notes (worthless outside of Kathar)
While Kathari Trade Queens may love to issue paper notes in vast quantities, they are not widely recognized.  In some countries, including neighboring Tau Solen, paper money is given as an insult.  Part of the problem stems from the constant issuance of new types of paper money, each one backed by different Trade Queen, who themselves experience fluctuating values.  Most people think that paper money is a terribly stupid idea.

Oxhead Tokens (worth twice as much to the Temple)
The Temple has an internal currency called Oxhead Tokens.  Each one has the stamped face of an ox on it, and is supposed to be worth one ox sacrifice in exchange.  Ostensibly, these tokens can only be spent on things that are good for your soul, like exorcisms, temple prostitutes, home blessings, and hiring a priest to pray away your sin (or for sins that haven't yet been committed).  This last category is the business of Indulgences: buying prayers.  It's like carbon offsets.  It's subject to a small amount of speculation and banking as well.  Each token is circular and has a small ampule of holy water set into the center of it.

Rai Stones (worthless except on the Great Sea of Suloi)
These are round boulders, at least six feet in diameter.  Unlike most currency, they are valued not for their beauty, usefulness, or royal decree, but because of how hard they are to make and transport.  It's a matter of honor.  Put a rai stone on a mountain top and it will be worth more than if it is left in the harbor.  But because their value comes from their location, people sometimes own rai stones that are very far away.  One rai stone fell off a ship, and now sits at the bottom of the harbor at Whore Island, and even there, it has an owner and a value.  In fact, ownership of rai stones are usually enforced merely by public agreement.  If you wish to sell your rai stone, part of its sale involves publicly giving it away.  There have been cases where a populace revolted against a leader and stripped him of all his wealth simply by agreeing that they were stealing his rai stones.  And by agreement, they did.  All rai stones are made from red stone from the isle of Zankatzu, near the city of Gengrimon.

Shingles (worth twice as much in Tau Solen)
Moving away from centrally-issued currencies, the small townships of Tau Solen each issue their own currency, which is then honored by all the others.  Originally, these "coins" were printed on whatever is most convenient, but now they tend to be printed on small shingles.

Tomb Keys (worth twice as much to Dwarves)
Dwarves spend their whole lives thinking about how they are going to be buried.  They spend more on their tombs than they do on their homes, and so ownership of a splendid tomb is something to be desired.  Dwarves also build more tombs than they actually need (which is why dwarven cities are about 50% empty tombs, once you move away from the main thoroughfares).  One reason they build so many tombs is because they can be easily traded: you just give away the key, which will be engraved with the name of the dwarven city where the tomb is located, the number of the tomb, and the number of cubic feet of space the tomb contains. In theory, each cubic foot is worth 1 copper.

Wooden Coins (worth twice as much on the Zeban Sea)
The sea-going Marinel use painted wooden coins, made from a valuable wood that is prized for it's strength and lightness, each with a burnt brand on one side and a thick layer of paint.  They use these coins for one reason: it floats.