Terrifying - NPCs must make a morale check when first engaging a dragon.  PCs must make a save vs fear (1d6 rounds) the first time the dragon attacks them, and each time a PC is killed dead.  PCs who have killed a dragon get +4 to save against dragon fear (cumulative per dragon killed, until immune).  They also get to write "DRAGONSLAYER" on their character sheet.

I usually run low-level games, so I imagine this dragon being appropriate for a level 3-5 party.

So, I've been thinking about the same things that +Gus L was thinking about when he wrote his post about making big boss beasts more resilient against the usual PC tactic of surrounding them with NPCs and winning simple because they get 12 attacks vs the dragon's 3.

Fear is a good way to keep the mooks off the dragon.  You might bring six mercenaries, but 4 of them lose their nerve as soon as they see how big the damn thing is.

And an AoE attack is also a good cure for the swarm tactics.  True, there are arrows and other ranged attacks, but if the party has enough room to shoot arrows, they're probably outdoors, and if they're outdoors, the dragon can just drop boulders on them, do strafing runs of fire breath, etc.  I'm not too worried about a dragon outdoors.

And lastly, Mettle provides some insulation against save-or-die effects.  There's still a chance you can baleful polymorph the dragon into a snail on the first turn, but it's much smaller.  Allowing certain abilities to pierce Mettle means that prepared parties aren't screwed.  And lastly, the fact that Mettle vanishes once the dragon is below half health, means that players might want to start throwing save-or-die effects once the dragon is bloodied.  If they've gotten the dragon to half health, they've earned it.

The biggest downside to Mettle is that it's largely a gamist mechanic.  Sure, you can pass it off as "legendary willpower" or something, but it's not intuitive.  Honestly, once the party got into combat with the dragon, I'd probably just read them the text from Mettle so they know how it works.

Of course, the best counter for player-level plotting is intelligence.

Dragons are smart enough to beat a tactical retreat when they get surrounded.  If they retreat deeper into their lair (flying down the vertical abyss) you can rest assured that the dragon has an excellent ambush spot prepared up ahead.  Perhaps they attack after loosing some rolling boulders.  Or when the party is crossing a narrow span, single-file.

And if a dragon is forced to retreat outside of its lair, that's not a problem either.  They'll ambush the party when they attempt to leave the lair, performing strafing runs as their breath attack refreshes, careful to stay out of arrow range.  Or, they'll block off the dungeon with boulders, and return after hunger and thirst have weakened the party.

Dragons rarely live alone.  They have a mate and some whelps, or they surround themselves with servants: kobolds, goblins, or humans who benefit from the dragon cult.

Centerra only has one race of dragons (no stupid spectrum of rainbow powers) but it does have a lot of unique, singular dragons.  Most dragons out in the wilderness are one-of-a-kind.

It looks like a human, bent, stretched, and warped by biomancy into a mockery of a dragon, imitating their size and shape.

It does not have Terrify or Fire Breath.

Horrify - Like Terrify, except that previous experience against dragons is no help, and targets that fail their save lose their next turn as they vomit noisily and gain 2 trauma points.

Shockwave Shout - Usable every 1d4 rounds.  60' cone, 3d6 damage and knocks targets back to the range of the cone, where they land prone.  If they collide with a solid object, they take 1d6 damage for every 10' more they would have traveled.  Save negates initial damage, but not the knockback, unless they are holding on to something solid. 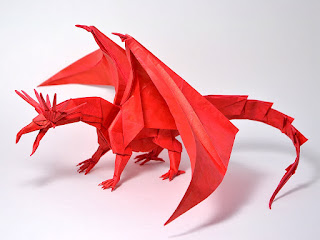 It does not have Fire Breath.  Instead of bypassing Mettle with ice, it is bypassed with fire. 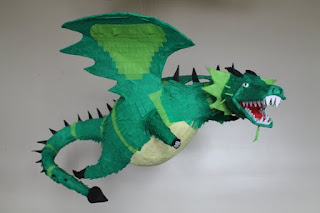 The Pinata dragon is summoned by ringing the fiesta bell on level 4 of the luchador's dungeon.  The longer it exists, the more treasure you get when it is defeated.  However, the older it is, the more dangerous it is.

Lacks Fire Breath and is not Terrifying.  Is weak to fire, not ice, similar to the origami dragon.

Party Breath - Usable every 1d4 rounds.  Deals 1d6 slashing damage for every 2 HD of the dragon, generates an equal number of gemstones worth 100gp each. 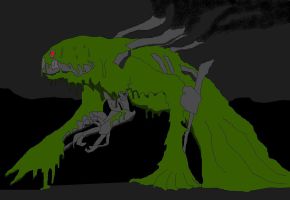 Sticky - Anyone hitting it with a melee weapon must succeed on a Str check or the weapon remains embedded in the dragon.

Sludge Bomb - Usable once every 1d4 rounds.  Bursts like a fireball with a 20' radius, 200' range.  Targets take 3d6 damage and are covered with acidic sludge that deals 1d6 damage and slowing targets (half speed, -2 to hit) until they are washed off with water.  If they are struck a second time, they are immobilized.  A save halves the initial damage and avoids being covered in acidic sludge.


the horror that is the MAN DRAGON