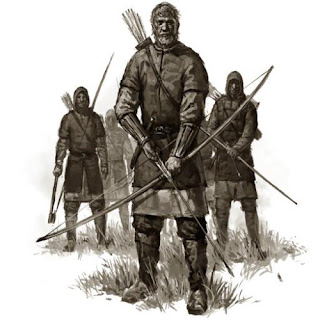 This post is written at the behest of +Dunkey Halton (who is sort of a gestalt person made of two people, I think?  Maybe like an ettin.)  If you combine this post with his post about bandit personalities you'll have enough for a complete bandit encounter / stocking a charming forest full of people who want to kill and rob you.

1. Behind a waterfall.
2. Elaborate treehouse.
3. Abandoned tower.
4. Overgrown farm in the middle of the woods.
5. Beneath a monastery.  (50% chance the monks are complicit.)
6. Riverboat moored amid thick reeds.

1. Steal from the rich and give to the poor.  If the PCs are poor, they will be given some money, perhaps grudgingly.
2. Steal from the rich, steal from the poor, and lie about it.  Spend it all on shoes.
3. Sell drugs from the bushes.  Wear eyepatches.  Scared of dogs.
4. Kidnap a wizard in order to cure their leader of a curse (slowly turning into a cherry tree)
5. Obey these fucked up witches who lives in a tree; steal specific organs from specific people.
6. Their leader is the rightful king; they have been hired to keep him drunk and far away from town (he's always wanted to be a bandit).
7. Building a boat from stolen carriages.  You're free to go.  They will use this boat to sail away to a promised land that doesn't exist, at the behest of a mad "prophet".
8. Just really want to kidnap some royalty.  Like, just want to touch a real princess, just once.
9. Expand their fort.  Accept refugees.  Develop theftocratic utopia.
10. Leader is writing a comprehensive be-all end-all guidebook to banditry.  Conduct experiments during their raids.
11. Raise funding for a distant war against a terrible foe.
12. Guilt trip.  [d3] 1 They need food for their starving children, 2 they're all lepers, 3 their parents need medicine to cure their black lung.

1. They all have dogs.  Dogs resemble their owners.  (Big shaggy dude = big shaggy dog.)
2. They have hidden ropes positioned throughout the woods.  They use these to swing through the trees with frightening alacrity.
3. They have all been enslaved by goblins, who ride their shoulders, choke their necks with their feet, and pull their ears to direct them.
4. Were-toads.
5. Deposed royal family from the next kingdom over.
6. Why are they all so fat? [d3]
1. Inherited their mother's curse.
2. Ex-members of a corpulent cult, hoping to lose weight.
3. Captured 3000 pigs in a lucky raid and can't stop eating.
7. Communicate entirely through birdsong.
8. Literally insanely polite. Bourgeois affectations even while stabbing you in the guts.
9. Pretending to be orcs, in order to be more fearsome.
10. Have a magic flying canoe.
11. Have trained monkeys dyed in fearsome motley colors.
12. Have a cave troll!