This is what happens when a human child is raised by modrons.

They want to get a nice accountant job or something, but no one will hire them because they are weird and sleep standing up, with their eyes open, humming The Calibration Tone (to show the pentadrones that they are healthy).

Mathematicians often become adventurers in order to complete their thesis.  If nothing makes sense, they might as well go try to impose order on the least orderly places possible: dungeons.

Map them out, make them straight, kill all demons, correct all illogical people.

Modron mathematicians are very dutiful, and most of them will constantly be writing letters home.  They'll write a letter full of the details of their new life among their fellow humans, give it to someone who looks Lawful*, pay them some money, and tell them to carry the letter to Primus, the One and the Prime.

Most of these letters are opened by the person who "looked Lawful", read, mocked, and fed to a goat.  DMs should give an insultingly small amount of XP when a mathematician spends money sending letters to Primus.  Like 10xp or something.  This is because mathematicians cannot carouse.

Primus never responds to these letters, but mathematicians are comforted knowing that Primus's behavior and responses are standardized and well-characterized.  They imagine what Primus would say if he were to read their letter, and they are usually correct.

If they ever somehow make it to level 9, they start attracting modrons and other lawfully minded folk, and they invariably found an ultra-rational town somewhere, in imitation of Mechanus.

However, some human mathematicians are more than just modron-level OCD sufferers.  Sometimes, they freak out upon experiencing the non-modron world**, and revel in their new-found freedom (which was previously more than unattainable--it was literally inconceivable).  These mathematicians are dreaded by modrons everywhere, and are known as Chaos Theorists.

This class is also appropriate for people who want to play a modron.

*There are no alignments in Centerra.  Hilariously enough, though, modrons seem to think that there are.

**Modrons are the inventors of mathematics.  They are also it's only real practitioners, and a few humans (architects, siege engineers) study under them to master their potent maths.  So, yeah, if someone knows math, it's because they apprenticed to a modron.  In fact, people often don't call it mathematics; they call it the "modron art".

This is a class about math and fiddly numbers.  Not just for the character, but for the player, too.

I was talking to +Chris McDowall about the desirability of having a complex class for people who like complex classes.  I ventured that I (sometimes) like fiddly little subsystems for classes, because then the class feels very different from other classes.  And that's diversity.  That's the freshness.  I like playing a quirky little subsystem long enough to figure out how to best utilize it.  Unravel its mysteries, so to speak.

Yes, fighters are simple and easy to understand, and I love playing fighters.  (I'm playing one right now.)  But there are people that thrive on complexity.  So, here is a complex class for people that like complex classes.  At the beginning of every turn, you have an incredibly complex little question to consider: which number should I put into my matrix?  And in the middle of each of your turns, you have another incredibly complex little question to answer: what spell or ability should I use?

It's a funky little optimization problem.  I suggest that the DM give a mathematician player a hard time limit of 30 seconds to decide those things, once its their turn.

It's a potentially powerful class, but it needs to be played like a chess game.  And more perversely: it's a very unreliable one, because it depends on getting the right numbers in your matrix at the right times. 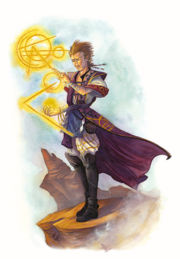 Think of your matrix as a bag full of scrabble tiles.  Except instead of letters on those tiles, they're numbers from 1-20.  The maximum capacity of your matrix (how many tiles the bag can hold) is equal to 7 + level + Int bonus.  If you want to gain a number but don't have room for it, you can overwrite an old number at any time.

The mathematician player will probably need a piece of scratch paper to keep track of this.

Alternatively, you could just download the mathematician tracker I made and print it out.

Keep track of this.  You'll probably be adding a number to your matrix every turn.  Modrons must be ever-vigilant against the forces of chaos!

There are two ways to lose numbers from your matrix.
Using Numbers

There are three ways to use the numbers in your matrix.  Your character cannot use any of them unless they have their math book open in front of them (usually held in one of their hands). 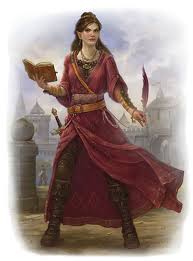 Attack vectors are your primary method of damaging enemies with math.  You have two kinds.

Euclidean Attack Vector
Erase 3 numbers from your matrix that form a 3-number straight (e.g. 3-4-5).  A creature or object within 50' takes math damage equal to the lowest of the three numbers.

Non-Euclidean Attack Vector
Erase 4 numbers from your matrix that form a 4-number straight (e.g. 17-18-19-20).  A creature or object within 50' takes math damage equal to the highest of the four numbers.

Announce it to the table when you gain a linear ability and when you lose one.

Spells with an asterisk are new spells, and are explained at the end of this post.  You can cast any of these spells on your turn, as long as you have the appropriate three numbers in your matrix (and remove them when you cast the spell).  So if you wanted to cast mathic missile, you would need to remove 5, 14, and 18 from your matrix.

Analyze Foe
If a creature in 50' fails its save, you learn all of its basic numerical stats: HD, max HP, current HP, armor class, attack bonus, attack types and damages, morale, speed, and intelligence.

Calculate Attack
You get +20 to the first attack you make next round.

Dispel Math
As part of casting this spell, erase another number from your matrix.  This number is X.  This spell functions as dispel magic, except that it has an X-in-20 chance of succeeding.

Divide Health
Designate a target within 50' and an integer X.  If the target's HP is less than X, nothing happens.  Otherwise, the target takes damage equal to half of X.  They are allowed a save for half damage (one fourth of X).

Integrate Matrix
Add one number of your choice to your matrix.

Mathic Missile
As magic missile, except that it does (1d3 squared) damage.

Multiply Health
Target creature's current HP is doubled.  If this would raise their HP above their normal maximum, this spell has no effect instead.

Prime Weapon
Temporarily enchant a weapon that you touch.  Whenever this weapon deals damage that is a prime number, it deals an additional +3 damage.  Lasts 5 turns.

Theorize
Increase the maximum size of your matrix by 5 until the end of the session.

Wall of Math
As part of casting this spell, erase another number from your matrix.  This number is X.  Creates a square wall of force at any location within X feet.  The wall is X feet on a side, and must be oriented exactly vertical or horizontal.    This wall lasts for X minutes and has X HP.
STARTING GEAR

Level 1 Modron Mathmaticians roll 2x on this table.  They also start with a math book.  If they lose their math book, they can create a new one by spending a week in a library or other mathy place.