The Invincible City of the Tusk People 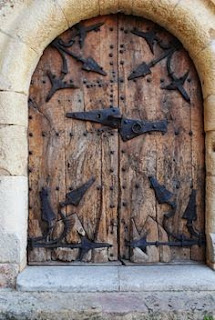 It is called the Invincible City because it has never been conquered by an army (though the city's masters have changed a few times).  From a distance, it looks like a loaf of bread.  It sits in the frozen south, the adopted brother among the other Ryvanwall kingdoms.

The Invincible City has always been alive in the most literal sense.

If you believe the tales, the people of Mon Ryva were beset by enemies, and they called out to their god for a place of refuge.  But no refuge was forthcoming, and they were driven to the sea, where their prophets bid them wait.

It was heralded by flotsam.  A door the first day.  Then a mass of broken furniture.  Many thought that there had been a shipwreck.  It wasn't until the beach broke out in cobblestones, like a rash, that the people of Mon Ryva realized that something extraordinary was happening.

Something came in from the ocean that night.  They all watched it approach; they saw its humped back against the horizon.  Chimneys bristled against the midnight sky.  Atop a spine of minarets, brine-spattered flags licked the wind before dipping back into the sea.  Hundred of feet boulevard churned the surf behind it.  Moon-stained windows broke above the surf, glistened, and then dove back under.  The city was swimming to land.

When the reached land, there was an earthquake, and water swept away the observers.  When the confusion died down, there was no sign of it.

And over the next few days, the Invincible City grew from the dirt, an inch every hour.  Miniature houses sprouted like mushrooms, and ballooned.  Larger buildings pillowed over smaller ones and eventually subsumed them.  And like honeycombs, they arranged themselves into squares.

Through this chaos, a network of streets.  Large thoroughfares first that later swelled, and branched into smaller tributaries.  The geometry of vascularization.

The walls grew like weeds.  A mixture of stone, plaster, and other intermediate materials, they encircled the new city like molars.  They were huge and blunt and bit at the sky.  To this day, they still resemble teeth.

The foes of Mon Ryva came for them, but the walls were scarcely needed.  The earth itself opened up and swallowed them all; men and horse alike went tumbling into that gnashing pit. 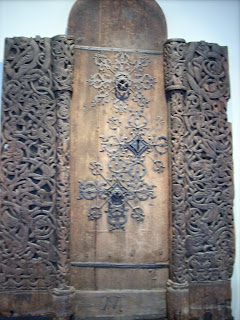 It is a strange benefactor, the city that Mon Ryva sent them.  It has its own whims, its own whiles.  And it has a secret history that the people are not privy to.

In the early days, , it is said that strange buildings would sprout.  Rounded things that bristled with coral.  Buildings without doors or stairs.  Vertical avenues into the ground, that led to columnar apartments that would only be suited for tenants capable of flight, or swimming.

And there are stories, too, of the cities old inhabitants.  Glassy-eyed fish men found cowering in alleyways, who were snapped up by the cobblestones as soon as they ran for the ocean.  Or people who would open a closet and find a set of sea fans wreathed in gold wire, or a set of pink-lipped amphora of coral.  But then the city would snap the closet shut and draw it away, as if it were embarrassed, and such closets would never be seen again.

Of course that has all changed now that the Invincible City has learned to imitate our cities perfectly; such slip-ups no longer happen.

The city is no one's slave, and it does what it wishes.  It eats people, sometimes a great deal of people, but this is never haphazard, and never without reason.

The city has four immutable rules.

Of course, these rules are limited by the city's attention and senses.  It sees from its surfaces and it tastes with its floor, but these are slow and indistinct senses.

In the marketplace, a man draws a metal sword and stabs an enemy.  He quickly sheathes his sword, and nothing terrible happens to him.

In the marketplace, a man dapples the bricks with his blood.  He moans and cups it to keep from running, and his friends leap to bind the wound with their shirts.  Nothing terrible happens to him.

These men are lucky.

For every round that you use a metal tool, or drop blood on the floor (from a piercing or slashing weapon, for example) there is a 2-in-20 chance that you will draw the ire of the Invincible City.  This chance increases cumulatively with exposure, so after the third round of using lockpicks, there is a 6-in-20 chance of being noticed.  Taking measures to disguise your metal (such as wrapping a mace in leathers) will cut this probability in half.

If the city is annoyed at you, and watching you more closely than others, also increase the chance by +2-in-20.  If the city loves and adores you, you may wear metal freely and bleed where you wish, but the city loves no one save Angra Blacktongue.

If the city wishes to kill you, this is what happens: the street suddenly yawns beneath a man's feet, and it closes around his torso.  A moment of crying out, a stunned alarum, and then the cobblestones part slightly and the man is sucked down and swallowed, slurped up like a noodle.

Beneath the ground, the people say, the cross-sections of the underground are neither brick nor sewer but something streaked with red and white and blue that is thick like clay.

But to tell stories of such incidents is to exaggerate the malevolence of the city.  Obey the rules and you will be fine.

There are no taverns in the Invincible City, because there are plenty of houses.  Buy some food from a vendor in the street, and then find an uninhabited house.

However, the city has expectations.  If you want to occupy a family house, the city will expect you to act like a family (not a bunch of adventurers).  Failure to do so can lead to leaky roofs, stuck doors, rats, and other signs of the city's disapproval. 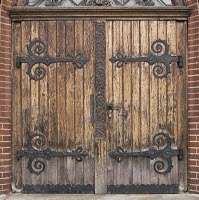 The Secret Names of the City

As you'd expect, this produces a lot of curiosity.  Wizards and sages have done their own research, and the city usually eats them for their trouble.

By all accounts, the Invincible City has other names, true names, dating back from when it was something else, somewhere else.

By all accounts, the Invincible City has a mind.  There have been many attempts to speak with it; but there have never been any responses.

By all accounts, the Invincible City is capable of speech.  It merely chooses not to respond. 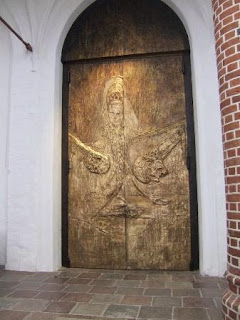 Neighborhoods of the City 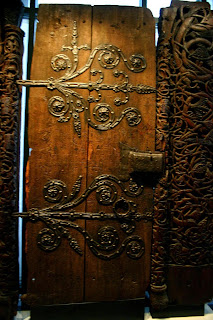 Landmarks
Roll 1x for each neighborhood.  Some of these are unique, and the city will only have one.

Then a wizard named Oshregaal came to the Invincible City and precipitated the rise of the Tusk Clan.  They are led by Angra and Gaskin Blacktongue, and their depredations will probably have to wait for a separate post.