So, different cultures around Centerra have different ways to hurt people at a distance.  Most people use arrows.  But not everyone.  So here are 3 alternatives, all mechanically identical to a bow with 20 arrows.


They probably cost about 10x as much as a regular bow and 20 arrows, but those things are usually pretty dirt cheap, and players love weird ways to kill shit, so the price is probably justified.

Honestly, some of these are cool enough that you may just want to make them unique items (but see the last few paragraphs below).

Baby Fluke Shark and a Needle

Off the coast of Charcorra, the spindle kickers sometimes return with sharks infected with echo flukes.  If these sharks are pregnant, Charcorran sickness weavers will then handle the messy task of extracting their fluke-warped embryos.

Fluke sharks are a type of mutant shark.  The adults are pretty horrible, but don't concern yourself with that at the moment.

In Charcorra, you can buy a baby shark in a clay pot of brine.  You take the shark out of the jar and stab it with a needle.  The baby fluke shark is injured, and it bleeds.  After about 20 stabs, it dies.  However, whenever the fluke shark takes damage, it mirrors that damage onto whatever it is looking at.  Baby fluke sharks magnify the damage they take, so a needle stab on a tiny shark becomes a much larger puncture wound on whatever it looks at. 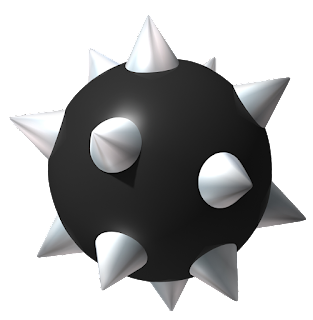 Of course ioun stones have been weaponized.  Don't be dense.

An ioun morningstar orbits your head like a ball bearing covered in spikes, a bit like a miniature moon.  Each ioun morningstar is bonded with a pair of hatesteel gloves, which can control the tiny, furious moon.

A wielder can direct the ioun morningstar out in increasingly eccentric orbits at increasingly ludicrous speeds, until the diminutive missile smashes into its target as hard as a sling stone.

After 20 such attacks, the ioun morningstar becomes exhausted, and must be alchemically resurfaced.  This is a trvial process that costs about as much as a bundle of 20 mundane arrows. 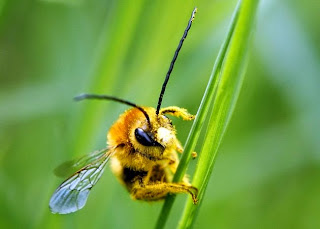 The  halflings of Centerra keep bees, which are used for food, alchemy, and protection.  Among the weaponized species, the most deadly species are called zingerbees.  Black Dancers, Angel Eaters, and the greatly-feared Rabanollis.

Zingerbees, on average, are as intelligent, deadly, and loyal as any wardog you will ever meet.  You usually buy them in packs of 20.  They are usually sold in a hive-hat, but these are not really necessary.  Beekeeper assassins usually just store the zingerbees on the inside of their sleeves.

The bees die on impact, but not before discharging their deadly loads of acid.  (So, I guess this one does acid damage, but aside from that, it's mechanically identical to a bow and 20 arrows). 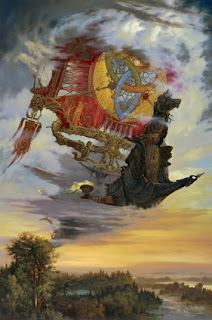 It may be that you want to use these weapons as unique or magical weapons, instead of just shallow replacements for a bow.  If so, consider the following changes.

The baby fluke shark might never take any lethal damage from needle pricks, or it might heal a certain number of needle-stabs every day.  This means a character is basically carrying around and abusing a stunted, mutant shark for the whole adventure, which is pretty cool.  It probably also requires food an a brine jar, which are nice drawbacks to a magical weapon.  You may want to have it do more damage, but I think that might not be necessary, since it's already ripe for player exploitation (i.e. what happens if you trick an opponent to step on the poor thing?).

The ioun morningstar probably should just exist as a permanent weapon; ditch the charges.  If you wanted a more interesting variant, you could have it store +1d6 damage for every turn you spend charging it up, up to a maximum of 3d6 damage at 3 rounds.  At that point, it's whirling around your head as fast as a lawnmower blade.  The other wrinkle here is that opponents might be able to trap, eat, or damage the ioun morningstar.

And the zingerbees can be expanded into a hundred different interesting directions.  Just make sure you keep the flag-batons involved--that's the center of the whole charm.  But you can give players a bee hive to carry on their back, which can hold up to 50 bees and regenerates 1 lost bee a day as long as the colony is fed.  Maybe give the queen bee telepathy and Intelligence 10.  Hell, give her Intelligence 18, so she's smart enough to know that you're an idiot adventurer who's probably going to plunge her whole family into lava any day now.  That makes an nice alternative to a egotistical magic sword, doesn't it?
Posted by Arnold K at 6:02 PM