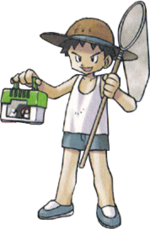 Based on the wizard.  Just subtract the spells and add all this stuff.

Level 4+
If you want to expand this class beyond level 3, I wouldn't just increasing the number of bug collected each day (although you could certainly do that).  Instead, I'd give them an expanded table of bugs in each ecosystem with d12 different bugs each.  Bugs number 11-12 have more powerful effects.  Then at level 6, increase it to a d14 table, with two more powerful bugs.  Et cetera.

Bugs are insects, spiders, snails, slugs, and limbless worms of all types.

Each bug collector begins play with a Butterfly Staff (functions as both a quarterstaff and a butterfly net), a bug journal, and a comfy pair of shorts. 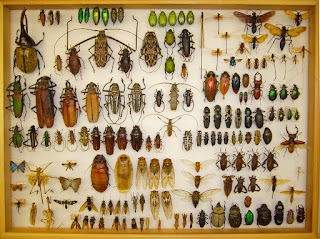 Each ecosystem has a different selection of bugs.  Bugs are collected randomly.  Each time you get a new bug, enter it in your bug journal.  (DMs: Make up a fun fact about each bug.)  Once you've collected all 10 bugs in each ecosystem at least once, you get a bug badge.

After being collected, each bug only stays alive (and therefore useful) for the rest of the day.  (They're functionally equivalent to spells, in case you were wondering, so this is equivalent to getting a random selection of spells each day.)

Each bug can be used for its effect once, and then the bug either escapes, dies, or is eaten.  This really depends on whatever sort of fiction the DM wants to enforce.  (But I recommend that nursery spiders should be eaten to gain the effects of spider climb.)

These are random items that you find near bugs.  It might be a half-eaten leaf or a chrysalis.  To others, it's just a piece of trash.  To you, it is a magic talisman that bestows magical powers.  And, you're right!  But only while you wear it.  However, you can only carry so many bug badges at a time.  If you carry too many, you lose the effects of one of your older ones.

You gain a bug buddy of a type chosen by you (butterfly, beetle, non-poisonous centipede, spider, ant, worm, moth, or fly).  This must be a mundane bug without any special powers, no bigger than what you could fit in your (closed) mouth.  The bug has Int 3 and obeys you unhesitatingly.  It can understand commands of up to two words, optionally pointing to something as well.  If your bug buddy dies, you get half the normal XP from this session, and you gain a new bug buddy the next time you go bug collecting.

Speak With Insects
This effect is permanent.  Bugs mostly know things related to food and predators.  Poisonous insects are sarcastic.  Shelled insects are gruff.  Worms and caterpillars are naive.  Grasshoppers and crickets are jokesters, and are intelligent to provide pleasant conversation partners.  Ants are boring.  You can also talk to purple worms, who have personalities like furious trucks.

Killing Jar
You can store a bug in a killing jar indefinitely, but only one bug.  This lets you "lock" one of your collected bugs (spells), so that it lasts beyond the 1-day expiration date. 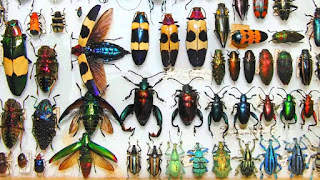 I eventually intend to do many different ecosystems.  Here are 3.

Cave Badge: Treat your falls as if they were 10' shorter.

Plains Badge: Save +1 when wearing shorts.  You cannot wear shorts with armor heavier than leather.
Posted by Arnold K at 11:45 PM