Creatures for The Dig

I said I'd write a dungeon, didn't I?  Maybe this one?  i should probably get started.

These are morlock children.  They are used in wartime as scouts and lookouts.  Despite their youth, they disciplined fighters.  They do not run away out of cowardice; it just makes better tactical sense to run for reinforcements than to tackle a difficult enemy head-on.

Run Away: Squealers make a morale check at the start of a battle.  Whenever a group of squealers fail their morale check, they run for reinforcements.  And since you'll never find squealers without larger morlocks nearby, squealers will almost always find some.

These are just normal, humanoid morlocks.  They're the result of a few hundred years of selectively breeding humans to serve their centipede overlords.  They are pale, thin, intelligent, and fanatically loyal to their masters.  They wear loinclothes and a lot of elaborate piercings.

Subtle: 3-in-6 chance to surprise.  Can run away without provoking attacks.  Cannot be tracked in caves. 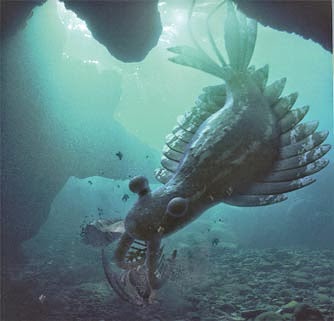 An 8' long beast that was the apex predator of its time.  Looks a bit like a killer shrimp.

Anomalocaris will usually attempt to swim away after it has grabbed a target.  Then it just find a secluded part of the cave where it can grind it's prey to death with its circular mouth.  They have an intense love for trilobites and will attack them preferentially, without fail.

About 18” in diameter, these spiny animals are just a symmetrical shell atop a slug-like foot.  It's shell is covered with spines, each 9” long and as sharp as a knife.

Flurry: Wiwaxia can throw 1d4 spines as a single action.  If someone has a shield readied against a particlar wiwaxia, it blocks half of the spines automatically.

Blind: Wiwaxia listens for nearby threats, and then throws spines reflexively.  Their sense of hearing is about as good as a human's, and a character can sneak past by rolling under their Dexterity. 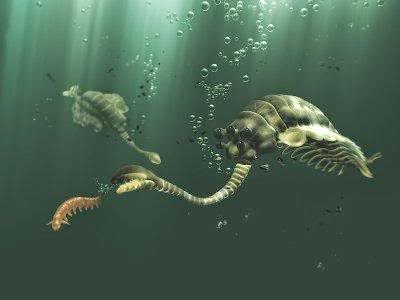 About 2' long, with undulating side paddles, five eyes, and a prehensile jaw (sort of like an elephant trunk with a lobster claw at the end of it).

After an opabinia succeeds on a hit, it will retreat to chew its food.  After 1d6 minutes, the surviving opabinia will regroup and attack again.  However, this requires a morale check, if they've lost a significant chunk of their hunting group.

Hallucigenia is small, but aggressive.  It will mince over to other creatures and strive to attack them with its needle-like legs.  It's face is a featureless bulb, with a sphincter-like mouth at the tip.  It is about 6 inches tall.

Guilt: After killing a hallucigenia, a character is compelled to feel guilty.  If they fail a save, they will avoid all violence for 1d3 turns.  These feelings of guilt will persist until they do something noble (save an innocent, buy their mom some flowers) or wake up after a night of sleeping.  The guilt will return when the character is laying down to fall asleep.  Once asleep, they will dream of a vast plain of stinking mud, like a primordial sea floor exposed to a large, pale sun.  Here, they will do battle with another hallucigenia, using whatever equipment and spells they had available when they fell asleep.

The nightmare hallucigenia is about 15' tall.  It strides atop 8' tall needles in a convulsive undulation.  It's dorsal tubules whip their air.  But worst of all is the head, which has gone from being a featureless white bulb to a crudely human face, with blue eyes and cruel lips.

The nightmare hallucigenia will pursue the player relentlessly across the mud until it can kill them.  It can be fought, or it can be escaped (requires outrunning it for 8 hours), but it can never be appeased.  If a PC is killed in the dream, they will die in real life.  Their companions will discover their mangled body in the morning, trampled and pierced as if by a dozen spears, their corpse stinking of the sea floor.

A huge mass of flesh and slime, gently sussurating as internal reactions gas off noxious by-products.  It looks threatening, but if it is never attacked, it will never move nor attack.  Unless the PCs go right up to it and jump in, or something.

Evolve: The primordium is always evolving.  Keep track of the last three things that damaged it.  It gains immunity to those damage types (piercing, bludgeoning, slashing, fire, acid, lightning, etc) and gains the ability to duplicate those attacks.  If you shoot it with an arrow it will grow armored plates and shoot spines (mechanically identical to the arrow).  If you slash it with a sword it will grow immensely thick hair and slashing claws.  If you pound it with a hammer it will become obese and grow huge, pounding paws.

Each time it wants to go somewhere but can't get there in one turn, it will gain +3 Movement, Fly, Swim, or Burrow, up to a maximum of 18 Movement. If it is spoken to, it will attempt to respond by growing a face and imitating the sounds.  Talk to it for a few days and  you may even begin to see it develop a simple intelligence.

Basically, it evolves (Lamarckian style) whenever it senses a need, or to imitate something else.  Determine it's behavior according to those two criteria.

It's a bit out of the scope of the average dungeon encounter, but the primordium could honestly go on to become anything.  It's a blank slate.  It could turn into a Tarrasque and the PCs could teach it morality.  It could turn into a super-doppleganger determined to resurrect all extinct species.  (But most likely the PCs will murder it in some fucking cave.)

Disease: 1d4 Dex.  For every 3 points of Dex you lose, you gain +1 AC.  Unlike other diseases, the damage from this disease is permanent (if untreated).


Rules for Diseases
Once you're infected: