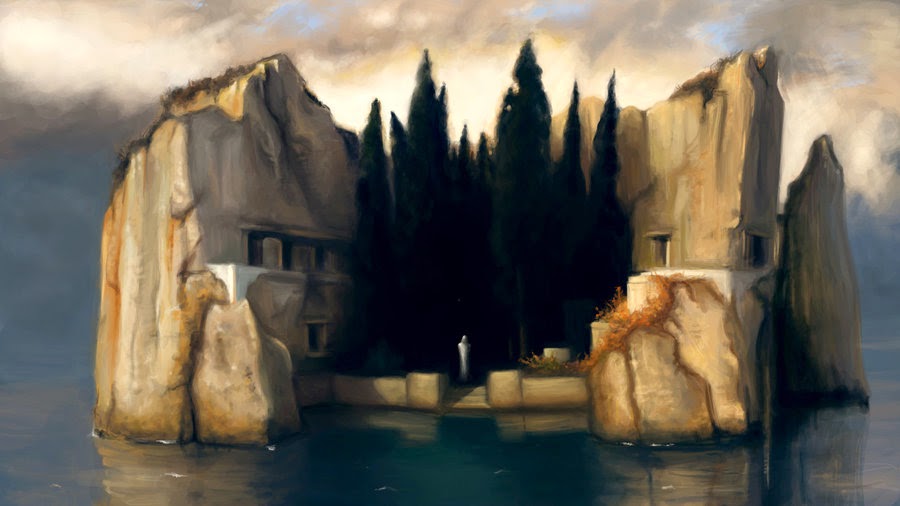 It's possible, but a little simplistic, to divide Centerra up into cities and Wilderness.  I capitalize the Wilderness because it's not just land that doesn't have a city atop it yet, but is actually something else entirely.  Things get weirder out in the Wilderness.  Too many inexplicable things happen.  People are afraid to lose sight of the cities in the same way that sailors fear to lose sight of the shore.  (Supposedly, this is why distant farmers are sometimes hella weird, and why proper urbanites shun yokels.)

It might be that cities push back the incipient weirdness of the world by exerting Order, like a magnetic field.  It might also be that settlements built in weirder places always fail, torn apart by forces beyond their ken.  (And indeed, the world is full of abandoned towns.)

And of course some places are agreed to be much weirder than others.  The Frogstar Peninsula, The Cold Hills, the Enigma (of Meltheria), the Abominable Island, the Immortal Mountains.  The list goes on and on.

Wizards blame ley lines for dividing the world into Normal and Weird.  Clerics talk about the civilizing power of civic Order, which tames the wilderness (since Nature is Satan's church).  Common folk talk about ancient burial grounds, leaching their poisons up through the earth.  Scholars say that there is no such thing as Wildnerness with a capital W, and once we understand the natural world enough all of these inexplicable occurrences will vanish like boogeymen behind a closed closet door.

But scholars are a minority, one that is regularly mocked by every other occupation.  Nearly everyone else you ask will tell you that once you walk far enough from your lord's castle, the world subtly shifts around you, and becomes cruel and inimical.  That the world outside your city actively, consciously wishes to hurt you.

Dream merchants are one of those things that just happen, out in the weirder parts of the wilderness.  Add them to your wandering monster table (random event table?).

Dream merchants come to you in your sleep.  They appear as a fucked-up version of someone you used to know.  Examples: your mother, magnified impossibly huge.  The bartender in your home town, but with every word he speaks, beer spills from his grinning mouth.  Your childhood dog, standing on both legs and carrying a small sack over his back.

They speak with all the aplomb and wit of a Nigerian prince contacting you by email.

"Hello, I am merchant of your dreams.  Perchance, we can make business together?  Have I got a deal for you!"

"How are you today, welcome friend, to my dream house.  I need your help to complete a transaction with the once-in-a-lifetime opportunity in the physical world."

And then they try to cut you a deal.  An obvious example is "If you give me 100 silver pieces and your fur hat, I will sale you a potion of discount, which will make you allow to see ghosts and other invisibles.  Do we have a deal, friend?"  And then if the PC accepts, the coins and hat will vanish from their gear, and the dream merchant will tell them to spit into a vial, and that the spit will transform the potion of see invisible.  This is totally legit, and the PCs spit will indeed transform into a magic potion.

Roll a d20 to see what sort of a deal they're cutting you.
1 = they'll sell you a magic sword for literally some peanuts
10 = fair deal
20 = massive scam (either massively overpriced, or they exaggerated the item's efficacy)

Then roll a d6 to see how obvious this is
1-3 = seems legit
4-5 = obviously suspicious
6 = seems like the opposite of what it is ("Would you like to buy a cursed sword?  I mean, not cursed.  I meant to say curled sword, haha.  Cuuuuurrrrrl-ed.")

Alternatively, they sometimes ask for other stuff (30% of the time, if you want a %).  Because sometimes dream merchants need something.  They're offering you a fair price for this.  Hell, they'll offer you a generous price.  They usually pay in rubies, which you'll find beneath your tongue when you wake up.

1 = "I would like you to deliver a memory for me.  I will put the memory in your brain if you accept.  You must deliver it by sleeping in the queens bed, in Iagatro Castle."

2 = "I seem to have forgotten my name.  May I have yours?"  (This will cause the PC to vanish from everyone's memories.  They will lose all contacts.  And when they wake up, they will have forgotten their name.)

3  = "I am scientist of great renown!  I am researching!  I would like to see what happens when three curses suffer a human at the same time!  Will you get three curses for me and then go to sleep?  I have rubies."  (50% chance that the dream merchant will remove all 3 curses after paying you for this service, otherwise it forgets to.)