Some Monsters or Whatever

Here's some minor monsters or whatever.  Not quite interesting enough to warrant their own post, but maybe five of them will suffice.

A couple of them are damn dirty reposts from the bathhouse dungeon I wrote. 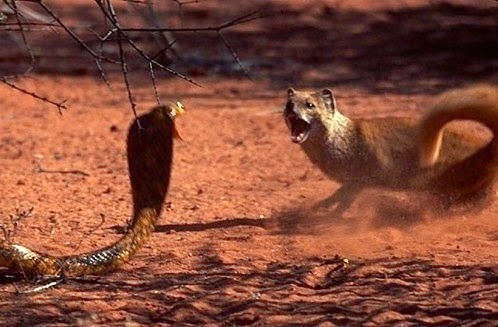 Dragonkiller: +5 to AC and attack rolls vs dragons.  Immune to fire and fear.

Dragon eaters (a.k.a. the dire mongoose) are about the size of a grizzly bear, but with the elongated body of a mustelid.  Their fur varies between a shaggy brown coat to a sleek yellow one "as golden as a dragon's hoard".

Despite their name, they struggle to kill adult dragons, and will never attack an adult dragon head on.  Unless they attack in groups, which they occasionally do.  They kill young dragons with ease, however.  Their usual method of attack is to cling to the back of a dragon's vulnerable neck and bite the spine.

Cloaks made from a dragon-eater's hide are immense status symbols and help the wearer resist dragon flame (+4 to save).  It is said that whenever a giant weasel lives to be 100, it will turn into a golden-coated dragon eater that can disguise itself as a human.  It is also said that dragon eaters reproduce by biting off their tail, which becomes a baby dragon eater.

Because of the obvious symbolism, Asria has the dragon eater on their flag and maintains a small stable of them at great expense and risk (as the animals are also fond of eating humans).

(Asria is the rival and enemy of Kelzon, since they share a watershed and were previously the same country.  Kelzon is famous as the place that "has pet dragons, and is home to the dragonrider knights", but visitors are often amazed to discover that the opposite is true.  Dragons control many of the larger mercantile interests, compete with the nobility to fulfill the same function, the "dragonrider knights" are glorified shield-bearers who protect dragons' vulnerable necks during warfare.)

They are a byword for bravery, in the same way that Einstein is smart and Hitler is evil.

Phoenixkin: Anyone who directly kills a bomba bird catches on fire (1d4 damage initially, plus you're still on fire).  Bomba bird feathers can bundled into torches which burn 2x as long as a normal torch, and produce no smoke (some say they actually produce breathable air).  Bomba bird eggs can be thrown as small bombs (1d6 damage each, save for half) are sell for about 20s each in a large market.

Everyone knows that bomba birds are related to phoenixes.  Poets describe them as graceful, orange chickens.  Foresters describe them as mean-as-hell little bastards.  But they've got a lot to be angry about--people are always stealing their eggs.  They've never been domesticated, and attempts have usually resulted in the birds eventually killing themselves trying to reach their tormentors while the chicken coop burns down.

Engulf: +2 to hit.  On a hit, the mudman dies and the target is engulfed in mud from the waist up.  Target can hold their breath for a number of rounds equal to half of their constitution.  Target can break out by rolling under half of their Strength.  Mud can also be smashed off the target with a bludgeoning weapon.  The mud has only 1 HD, but the mud only takes 50% of the bludgeoning damage--the engulfed person takes the other 50%.  Every point of damage done to the mud can be added as a bonus to the character's Str check.

Mud to Mud: A mud man can turn into mud.  They can't do anything while they're mud, but they can still listen.  They are indistinguishable from normal mud in this form, and usually hang out in a larger body of mud.

Regenerate: An injured sand man automatically regenerates to full HP at the beginning of his turn, but only as long as it is in contact with a sufficient amount of sand to repair his wounds.

Be sure to distinguish large sand men from small sand men, for your players' sakes.  A sand man with 2 HP is trivial; a sand man with 16 HP can be surprisingly hard to kill.  You can scale up sand men, too, into HD 3+ versions, but be aware that it becomes exponentially difficult to knock down all of one's HP in a single turn (except for wizards).

Sleeping Sand: A creature that kills a sand man with a melee attack must make a save or fall asleep.  As the sleep spell.

Venom: Save or be poisoned for 1d20 hours.  While poisoned, you gain infravision, but are blinded by any level of light.  Also, cricket song seems strangely arousing.

Dire Cave Crickets are sometimes raised by dungeoneers, who value their venom for it's useful properties while exploring the Underdark.  A live cricket costs 50s, and a dose of cricket venom costs 20s.  Tame crickets are relatively docile.
Posted by Arnold K at 9:40 PM