Revamping the Undead: The Shade 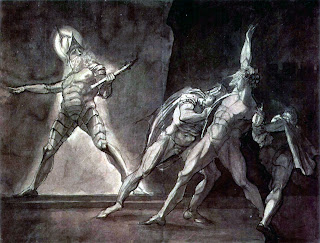 A Different Sort of Death

The paladins are rejoicing.  A sinner has been redeemed.  After six years in a labor camp and thirteen as a squire, the murderer has been knighted as a paladin.  This is a rare event, and there are tears in old men's eyes.  It is proof that even a damned soul can be saved through faith and good works.

Not a single member of the paladin order doubts that the ex-murderer deserves to be knighted.  (If any of them did, he wouldn't be.)  Hymns are sung, and there are readings from the Testament of Karzai and the Holy Sungra.  Every man, woman, and child goes to bed that night full of hope and optimism.

The necromancer does not go to bed with the others.  She creeps through darkened halls until she finds the rooms where the murderer lived until he was killed by the man he became.  It is clean and empty, and will remain that way until the next squire moves into it.  The moon peeks curiously through the window.

She sits on the floor, runs her fingers along the freshly laundered pillow.  There is no dust, but there are memories.  She can feel them in the air.  A decade of tortured dreams.  She dives past the guilt which coats everything like a grease, and mingles with the deeper layers.  The fear of capture.  The frustration and the anger.  And the long-repressed memories of slaughter: the naked joy it is to feel one's thumbs press through someone's eyes and into the softer stuff beneath.  From this memory-stuff she will make a shade. 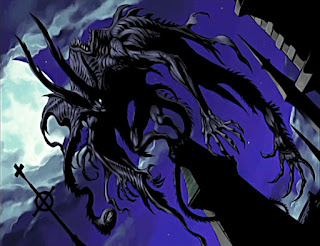 <Clouded Vision> Save vs curse.  You seem to be surrounded by howling, thrashing shadows.  It is loud and it is dark, and you cannot see further than 10', nor hear a shouting person more than 10' away.  This curse lives in one of your eyes (which becomes cloudy).  Removing this eye ends the curse.
<Dim> When a shade is hostile or consciously activates the effect, all light sources within 100' emit half as much light.  One or two shades have no effect on daylight, but three or more will dim the sunlight (down to a reddish brown disk) enough that it stops functioning as sunlight and is treated as merely another light source. Shades are banished by sunlight, and cannot manifest in it.
<Phantasmic> Non-magical, non-holy damage cannot reduce a shade below 1 HP.  When they are at 1 HP, they look like a person-shaped hole in the universe and speak like a windstorm (full of wordless sound and fury).  Destroyed shades return the next night unless a mass is held over the object of their haunting (chance of success is X-in-20, where X is the number of faithful people participating in the mass), or if they are confronted with the loathsome truth (with undeniable evidence, such as the sword of the paladin they went on to be, engraved with "To Loroth Kilbraden, who redeemed himself several times over in the eyes of Zulin.")
<Shunned Incorporeality> A shade can become incorporeal but is loathe to do so (as it reminds them of what they really are).  They will pass through surfaces if needed, but they will always become corporeal when they attack or at the end of their turn.  When incorporeal they have Fly 12.

Shades are raised from discarded fragments of a person's identity.  When a person rejects their religion, stops loving someone they once held dear, or has their innocence violently despoiled--these are huge and irreversible changes (but not necessarily instantaneous: it sometimes takes a very long time to stop loving someone, for example).

They are born from cognitively dissonant fragments of souls (personhood) that linger around the site of their ejection.  For example, a woman might be haunted by very faint micro-ghosts of those who loved her in her youth, or a battleground might be haunted by the lost identities of soldiers' innocences, who were incapable of reconciling their previous worldview with the slaughter that they saw around them.

These abandoned micro-ghosts manifest when they are called by a necromancer, or when the dissonance is especially great.  A micro-ghost of a spurned lover might manifest into a shade when it witnesses a couple kissing in front of it, for example.

Shades of good people are only good as long as they are not confronted with something that causes them internal conflict.  For example, the shade of a good cleric who converted to a different goodly religion will be good only until it sees a religious symbol, then it will fly into rage.  Because that is the secret center of every shade: anger at an incompatible world.  Shades of jerks will be doubly evil in death.

Shades haunt the places where they were "born" or the necromancer who raised them.  They may be incorporeal, but it is more likely that you will encounter them when they are corporeal and behaving much as they would in life.  They may only appear at night.

If a shade manages to kill the person they became (who killed them), the shade becomes the real person, and the real person becomes a shade.  If a person reverts back to who they were (a paladin decides that he wants to go back to being a murderer, for example) they re-incorporate the shade into their psyche, and the shade is no more.

Shades appear as the people they were in life, except indistinct and somehow muffled.  They are not immediately recognizable as undead, nor are they immediately hostile.  For example, the shade of a goodly cleric can converse, give directions, and even wish you good luck on your journeys (sincerely).  Since they are only fragments of people, they lack a complete set of memories, and nearly all of them don't know their name.  Confronting them about their incompleteness (asking their name, for example) is likely to upset their worldview and lead to the aforementioned rage, unless done very, very delicately.  They become dimmer and more indistinct as they become unsettled, so you can tell you are upsetting them when their eyes fade from grey to brown and you can no longer count the (individually distinct) buttons on their tunic. 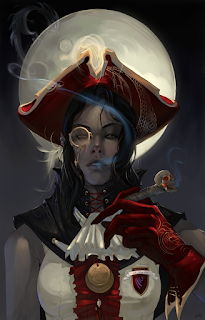 Using This Shit in Your Game

Yeah, shades can be used as another bishop in a tactical encounter.  Their dim ability synergizes well with enemies that have ranged attacks (like a spellcasting evil cleric).  But their origin story means that they are begging to be explored.  And this is a fresh take on undeath (fresher than most, anyway) which means that you can still surprise players with the "how did this undead come to be and how can we get it to stop haunting this place" revelations.

They can also be very personable, for undead.  You can talk to them, swap jokes, intimidate one.  Heck, you can probably have sex with one.

The whole reason undead are so over-represented in dungeons is a naturalistic one: who else can you have in a long-sealed tomb except oozes, golems, and undead?  And none of those classes of monsters are usually very chatty, which is a pity, because I believe that every dungeon should have (at least) one role-playing encounter and it's tough to fit one in if you are limited to those.  Consider a shade!  (Or a nice pack of gentleman ghouls who quote Shakespeare.) 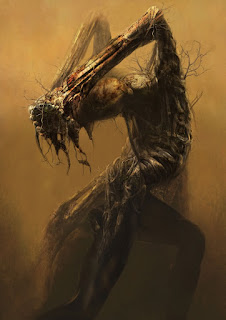 1. A vampire employs a quartet of shades to walk around in the day.  These are the uncorrupted remnants of people he has corrupted over the years.  If confronted with the right evidence, they might be turned against the vampire.

2. A paladin is now under suspicion of murder.  He (or his younger twin brother) was seen digging up corpses at the graveyard and then murdering the gravedigger (whose body still hasn't been found).  This is caused by his own shade, and is basically the story from the little piece of opening fiction.

3. In a dungeon, you come across the shade of a goodly cleric, presiding over mass in a room that he has made resemble a chapel.  He has all the powers of a level 3 cleric and will behave exactly like a level 3 cleric, unless you confront him with uncomfortable truths (e.g. "How long have you been down here?", "What have you been eating?")

4. A group of shades.  Hirelings and level 1 warriors who refused to believe that their beloved leader was leading them to the demon on level 4 for the sole purpose of sacrifice.  He was like a father to them.

5. An old woman is haunted by shades of past lovers.  They've been coming out of the walls of her mansion at night (where she's lived her entire life) and killing each other.  She wants the house exorcised, but it is not the house that is haunted, it is her.  Exorcising her might include a ceremony where you fight all the past lovers at once, or it might involve each past lover (most of whom are still alive) and confronting them. 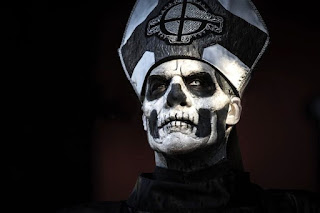