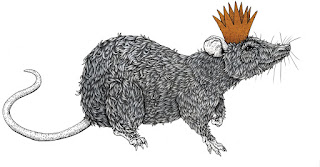 The point of this class is that you get to command large swarms of entirely disposable rats.  (Disposable minions are extremely useful for dungeon exploration--even tiny ones.)  You also get extra rumors when in town, and the ability to send rats out to scout dungeons for you.

I started out imagining a goblin rat master, but there's no reason you couldn't be a human, wererat, dwarf, or even a crab-man because why the fuck not. 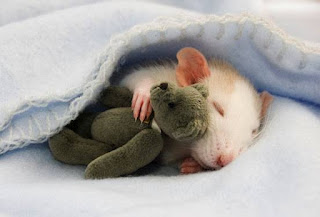 Rat Friend
You can speak freely with all rodents.  All rodents recognize you as the beloved of the rat god, and will improve their starting attitude toward you one step.  This protection doesn't extend to your friends.

Call Rat
You tap on a wall, sing a song, or emit a high-pitched squeak.  If there are rats nearby (and there are nearly always rats, unless you are underwater or on Antarctica or something) a rat who is loyal to the rat god will emerge from somewhere nearby and join you.  You can call one rat per turn.

Rats obey you because they are terrified to disobey the rat god for reasons they struggle to explain.  They obey you unhesitatingly, although they will cry little rat tears and complain if you give them obviously suicidal orders.

If you order your rats to fight, use the minion rules.  Each rat has HP 1, AC as unarmored, Movement 6.

Sidebar: Minion Rules
When attacking minions, you don't roll to see how much damage you do, you roll to see how many you kill.  Minions attack in groups, and make a single attack roll for the whole group.  This single attack does 1dX damage, where X is the number of minions in the group.  AoE effects kill all minions in its area of effect with a failed save, or half of them on a successful one.

Rat Gossip
When gathering rumors you gain 6x as many, as long as you spend at least 6 hours interviewing rats about what they've overheard.  You can only use this ability once per city.

Throw Rat
You can throw your rats as weapons.  On a hit, use the rules for attached weasels.

Sidebar: Rules For Attached Weasels
Each attached weasel does 1 point of damage per turn.  A weasel can be pulled off and held with successful Str check (with a +4 bonus, as rats aren't very strong) made by anyone.  A held weasel can be crushed in your hand automatically on your next round--this doesn't require an action, but it does require you to hold a weasel for an entire round, occupying your hand. 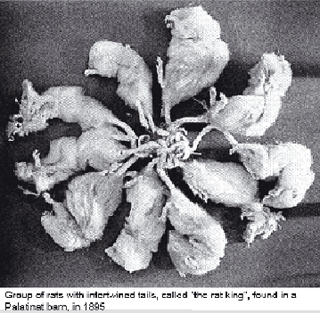 Transfer Affliction
Once per day, you can transfer a disease, poison, or curse onto a willing rat.  Your super-obedient rats always count as willing (although they may curse your name).

Rat Mapping
You can send your rats into a dungeon to map it.  This takes 20 minutes per room explored (how many rooms the rats explore is detailed below), but is relatively low risk, since you can just sit outside the dungeon and interview the rats that come trickling back out.  Choose how many rats you want to send in, and remember that you are still limited by how many rats you can control at once.  (A level 4 rat master can only control 4 rats.)

The end result of this process is a map of the dungeon.  Rooms are described primarily through smells (and remember that rats lack darkvision) as well as a general sense of "good place", "bad place", or "indifferent" based on whether or not the room contains anything of interest to a rat.  Rats enjoy food, water, safety, warmth, and an abundance of places to hide (such as furniture debris or dirty straw).  Rats don't enjoy fire, noise, large creatures moving around, people talking, or a complete lack of places.  Because rats are stupid, lazy, easily confused, and really bad at passing messages along.

So the map is just a list of circles with lines drawn between them, labeled with the predominant smell of that room (if any), with occasional smiley faces and sad faces, depending on whether the rats did or didn't like the room.

Rats find all obvious exits to a room.  They have a 2-in-6 chance of finding secret passages.  Even if they can't enter it, they can still detect it, and tell you about it.

To draw your rat map, get a d6 for every rat that enters the dungeon.  Assume that all the rats move into the first room and roll all the d6s.  So if you sent in 6 rats, roll 6d6 for the first room.

Every result of a 1 or 2 indicates a rat that has died, gotten bored, or wandered off.

If you have at least two dice that show a '6', the rats have paid especially good attention to this room, and return with a more useful description of the room.  (More details than just smells and whether or not they liked it--they actually return with a description closer to what a person would describe.  Remember that they are limited by their language.  A throne is described as a "fat human resting place", and a library is described as "human paper granary".  They have names for all the common monsters.  You don't get to cross-examine the rat about the description--it's all just knowledge passed along by the rats.  This basically equates to an extra line of description for the room.

Then pick up all of the remaining d6s, pick an unexplored path (from any room), and then go through it.  Repeat this process for the next room.

You can use this ability from within a dungeon, too.  Just point them in a direction, but also, remember that you're probably going to incur a few wandering monster rolls while you sit there waiting for the stupid rats to come back.

Rats that you use in this way consider this a good enough fulfillment of their duty that they wander off, unless you use Call Rat to make them obedient again.  (Mechanically, this is the same as all of your rats dying when you use them to explore.)

Summon Dire Rat
You can choose to summon a dire rat instead of a normal rat.  Dire rats count as five rats for the purposes of your Call Rat ability.

Thief Skills
You have thief skills as if you were a thief 5 levels lower.

Rat Apotheosis
You can establish a stronghold in the sewers beneath a city.  You attract 2d6 loyal wererats, 1d3 paladins of the rat god, and an insane cartographer.  When you call for rats beneath this city, rats summoned in this way do not count against your daily limit.  Once per day, you can cast rat swarm, but only in places where rats can be found. 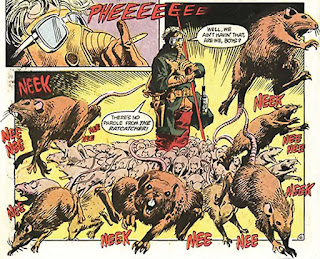