Revamping the Undead: The Shadow 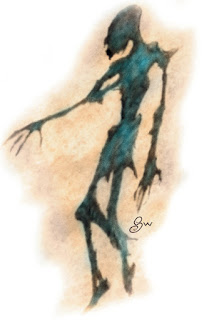 Shadows are undead, but they were never alive.  They are from the Ersatz (the Plane of Shadow and Mirror), where light is not only unknown--it's impossible.  (Have fun adventuring in a place where all the players are blind.)

In the Ersatz, they lived like ghosts.  They could not affect the world, nor each other.  If they wished it, they could become utterly undetectable.  They dwelt in anonymity and impermanence, and they loved it.  Shapeless, nameless, timeless.

Shadows two-dimensional.  There are inky reservoirs of them in the Underworld, millions of them packed inside a single crack, paper-thin (except much thinner). They enter Centerra when they ascend, slithering up through coal seams and flitting up secret creases.

And sometimes a dwarven pick will crack open this folded city of shadows, and from that tiny void a million shadows will pour out into the world, where most of them will encounter that cruel impossibility: light.  And they will perish uncomprehending.

But the larger shadows--the ones that are almost the size of a halfling's shade--sometimes persist.  And although they were hateful before, that inchoate avarice is honed like a knife's edge and then pointed at those torchbearers, those who would bring light into darkness.

They talk to each other of the sun, and of daylight.  The younger ones don't believe it.  It seems too vast and cruel to exist.

The Church teaches that shadows are the souls of the unborn who died while in the womb.  If the miscarriage was never baptized into the Church and given a proper burial, that soul becomes a shadow. 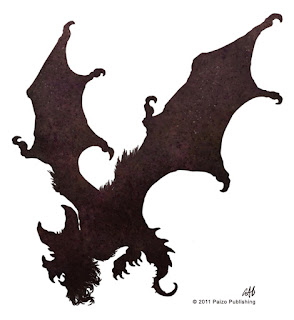 Behavior
They are flat, and they live on flat surfaces.  Walls, floors.  They cannot leave their surface, although they can reach up to 5' away from it.

In total darkness, they are basically massless.  They cannot be affecting by either sword nor spell.  But then, they cannot affect anything else, either.

So yes, if you find yourself surrounded by shadows, it is a viable strategy to extinguish your torches and head back out into the daylight.  You'll be safe from their claws as long as you remain in perfect darkness.  (Sidenote: I'd love to a blind dungeon run back to the surface.  A literal dungeon-crawl.)

But even in perfect darkness, the shadows will still follow you.  They will run their fingers over you, and you will feel their cold, frictionless skin against your own.  And they will whisper strange cruelties in your ears.

If there is light, they gain some mass.  They become paper thin.  They can be wounded, but they can also wound you. 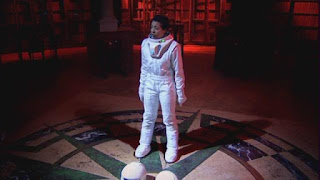 Shadows sometimes attack in groups.  They roar (and it sounds like paper tearing).

Shadows sometimes attack by jumping below a person and hiding in their shadow.  Or by giving the person an extra shadow, in a direction that is not cast by any real light source.  (They are quite good at this.)  They move when the person is not moving.

Shadows sometimes make allies.  Evil clerics are most common, but really, anyone with a lantern-mace is a possibility.

When shadows attack, they attack by tearing apart your shadow.  (This is represented by Charisma damage.)  If the shadow cannot reach your shadow, it cannot harm it.  Standing with a foggy abyss to your left and a torch on your right is safe, for example.

If you have a healthy shadow, it is a perfect reflection of yourself.  It moves when you move, strikes when you strike.

But as your shadow takes damage, it begins to lag.  At first it merely moves a half-second slower than you.  But then it begins to limp while you walk.  It stumbles where you jump.  It drips blood where you are not wounded.  Finally, it falls, and it will not move.  It is the exact shadow you would cast if you were dead.  And you have a full second to stagger around in confusion before dying yourself, because the loss of your shadow is always fatal.

As your shadow dies, you don't feel pain.  Not really.  You feel a rising panic, but also a diminishing ability to feel panic.  Or indeed, anything at all.  You are becoming hollow.  The Church teaches that you have seven souls that all overlap, and believe themselves to be a single creature.  But as your shadow dies, those souls are beginning to lose their synchronization.  The myth of singularity is beginning to come unraveled.

<Undead>
<Two-Dimensional> A shadow cannot move off a flat surface, nor attack anything that is not in contact with that surface.  They are undetectable when hiding in a shadow.
<Daylight> They are powerless in daylight, and flee it unconditionally.  It is the Worst Thing.
<Total Darkness>  They are powerless in total darkness, but this is a powerlessness they enjoy.  They will follow players, caress them, and whisper to them.  If this goes on for more than a minute, the characters gain a Trauma Point.

Sometimes shadows will infest a corpse, filling it's internal planes and piloting it around.  It takes at least 3 shadows to do this.

It may look a bit like a tottering zombie, depending on the decay. Or it may simply be a recently-dead person, showing few signs of violence or decay.

<Puppet> This isn't really a creature.  It is more like a piece of equipment.  If you want to smash the body to bits, the body has 2d4 x 10 hit points.  Only attacking the puppet's shadow will get you anywhere quickly.  After a round of combat, it is obvious that the puppet's "shadow" doesn't line up with any of the light sources, or even move appropriately.  Once the shadows realize that their deception has been discovered, they'll usually abandon the corpse and attack the party as a swarm. 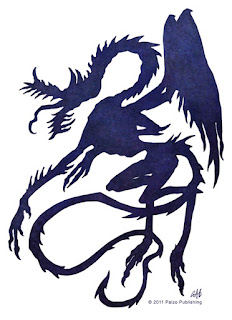