d4 Wisps Better Than Will

Stop trying to turn wisps into shitty little taser ghosts.  (Are they ghosts or air elementals?  Either way, you shouldn't be able to beat them to death with a piece of wood.)  They were cool when they were just spooky lights out in the swamp, flitting between the trees and making victorian neurasthenics fail their saves vs fear.

Stop trying to make them into combat monsters.  They're like the definition of an atmospheric background monster.  Not everything has to attack your HP, you fucking hacks.

Okay.  I feel better.  Good enough to propose some alternatives.

This is my take on a wisp.  It's bad luck.  It just shows up and starts following you.  It wants you to follow it, and if you don't, it'll cause you to get lost.

HD 1 AC leather
Fly 18 Int 10 Morale 4
*Ethereal
*Invisible - This is an invisible ghost carrying a visible, tangible lantern, which holds a ghostly blue flame.  This light is its soul.
*Aura of Disorientation - While a lantern ghost is following you, you have an increased chance of getting lost.  (Whenever you leave your current hex, you have a 50% chance to move to a random adjacent hex instead of the direction you intended.)
*Boredom  - Each time you enter a new hex, the lantern ghost has a 2-in-6 chance to get bored and wander off.  It won't leave the swamp.
*Steal Light - If the party is carrying a light source, the lantern ghost can add it to its own lantern.  A torch affected in this way goes out, and can never be relit.  A player's lantern suddenly becomes useless, and any oil it contains becomes inert.  (Treat this as a permanent curse.)  Any light-based spell (e.g. light, daylight) can also be stolen out of a spellcaster's head (no save).  When a lantern ghost steals a light, it collects the new light in its lantern.  If the ghost is killed or satisfied, it releases all captured lights.  It uses this ability if it is ignored or attacked.

Lantern ghosts are said to be the spirits of the damned, cursed to wander the swamps until they atone for their crimes.  (A task that most of them have apparently given up on.)  Most folks call them swamp candles or bog faeries or corpse lights.

The lantern shatters upon the ghost's death.  If, god forbid, the players manage to capture or coerce the lantern ghost into aiding them, they can use its lantern as a magic item.  The blue candle inside functions in every way like a normal candle (lasts for 2 hours of total usage) except that invisible things become visible within 10'. 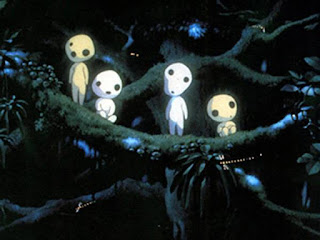 These are adorable little nature spirits that start following you in large entourages.  The noise from their rattling heads attracts trouble, but attacking them is a terrible idea.

They have many names, but the swamp folks call 'em swampy knockers.  Back in the cities, the nerds classify them as some kind of nature spirit.

They embody a playful, childish interpretation of the druid philosopy, and as such, revere the forest-as-eternal-concept while condemning all notions of cities, civilization, and symbolic thought.  Although, being children, their condemnation is more of a playful teasing.

*Cowards - They run away at the first attack roll.
*Protector - If they are attacked, there is a 50% chance that the next random encounter in the swamp will be with their protector.  If one of them is killed, this becomes a 100% chance.  If the protector shows up, the swampy knockers will also show up to watch the ensuing battle, but they won't participate.
*Aura of Rattling - Swampy knockers constantly rattle their heads.  This doubles your chance of a hostile random encounter, and negates any chance of a non-hostile random encounter (assuming your wandering monster table has wandering merchant NPCs on it).
*Boredom  - Each time you enter a new hex, the swampy knockers have a 2-in-6 chance to get bored and wander off.  They won't leave the swamp.
*Appeasement - The players must discard 25% of their coins and 25% of their other metal items into the swamp before the knockers decide that you aren't craven pawns of civilization.  These percentages are fungible--the players can discard 50% of their coins and 0% of their other metals to the knocker's satisfaction.  The knockers don't care about craftsmanship, just total weight of metal discarded.  They know coins are especially wicked, though, since coins are both refined metal and used symbolically.  (It is common knowledge that knockers will leave you alone if you throw a bunch of your money and metal into the swamp, but no one knows the exact requirements.)

As you travel, more and more and more swampy knockers will join the first batch in following the party.  If they don't get bored, you'll eventually have hundreds.

Grand Kodama
HD 8 AC chain Bite 1d8+2 + poison.
Move 12 Int 14 Morale 6
*Poison - 1d6 Dex lost once per round, lasts one round on a successful save, three rounds on a failed save.  Those who have their Dex reduced to 0 by this poison are permanently turned into a thorn bush.
*Fade Step - At will.  When used, the grand kodama fades out of reality.  The next round, the grand kodama fades back in anywhere in the swamp.  (This is basically a really slow teleport.) 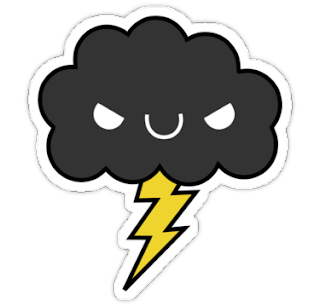 HD 15 Move as the wind
Other Stats are unnecessary.  It's a fucking cloud.  It is only hurt by things that can hurt a normal cloud.

*Ill Omen - Upon seeing the lantern ghost, hirelings make a morale check.  (Failure means that they will abandon the party unless paid significantly more.  Multiple hirelings failing simultaneously may cause a mutiny.)
*Aura of Bad Luck - While following the party, any critical hit or critical success that they roll is instead turned into a critical failure.  It also rains constantly on the party, in case that matters.
*Boredom  - Each time you enter a new hex, the cloud has a 2-in-6 chance to get bored and wander off.  It won't leave the swamp.
*Appeasement - The party must invite a curse upon themselves.  The easiest way to do this is to blaspheme the name of the Prophetess Yanu (leader of the Hesayan church).  This immediately satisfies the Cloud of Ill Omen.
*Spite - If the party achieves some great victory, the cloud has a 50% chance of becoming spiteful and firing down a 10d6 lightning bolt at them.

The Blasphemy Rule: Anyone who blasphemes against the Prophetess Yanu in Centerra has a 5% chance of being immediately struck dead through whichever means are most appropriate and dramatic.  Everyone knows this (and players should be informed of this before they commit to such an action.)  Evil clerics can usually blaspheme safely, since they are protected by their god.  And of course, you may not be struck dead if life is a better punishment than death.  Additionally, blaspheming causes religious hirelings (and this is 90% of hirelings in Centerra) to lose a point of loyalty/morale, as they are disgusted by your moral repugnance.

This is a small, intensely black cloud.  Sometimes red lights can be seen dancing within it; sometimes a face can be seen.  It wants to see failure, humiliation, shame. 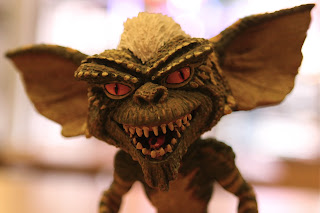 Everyone knows about gremlins.  They're the ones you blame when things go missing, or suddenly break.

Once you roll a random encounter for gremlins, they'll follow you until you run out of things for them to steal or break, or until you leave the swamp.  Once notices, players usually have a few options: appease them, kill them, or leave the area.

When chained and trained, gremlins can be forced to build and repair things.  (They are as ingenious in construction as they are in sabotage, but the very act infuriates them.)  Owning a gremlin is hazardous though, as there are many rules of gremlin ownership that must not be broken.

*Minor but Constant Thievery - Once per day and once per night, gremlins will steal one random item from one random party member.  That party member makes a Wisdom check to notice the gremlin's pick pocket attempt (with circumstantial bonuses/penalties as needed).  It is possible that many items get stolen before anyone knows.  (DM tip: ask to see their character sheet, then roll to see what is taken.  Consumables (water, food, potions) are not stolen, but are instead spoiled with feces and/or urine.

Obvious things may get noticed immediately, such as a missing hat.  How did the gremlins steal a hat?  The player must have set it down briefly when they were drinking from a stream, and when they looked back over, it was gone.)  There is nothing that gremlins cannot steal.  Large items (wagons, catapults) are especially attractive, and should be treated like another party member, except that they are sabotaged instead of robbed.

Stolen items are broken, if possible (they have the strength, resources, and attention span of a kindergarten class, so ask yourself if a bunch of 4-year-olds could break it) and then hidden.  More durable items are merely defaced and then hidden inside tree trunks or buried in ant nests.

*Appeasement - They must be served either blood or milk--at least a cupful for each gremlin (and this fact is common knowledge).  Opening your own veins for this purpose reduces your max HP by 1 point per HD until your blood regrows.  If a gremlin drinks your bodily fluids, you are tormented by nightmares and gain no benefits of sleep (no healing, no spell recovery) (few know this).  Beginning on the second night, you get a save to shake off this minor curse.