The Secrets of Mundane Animals 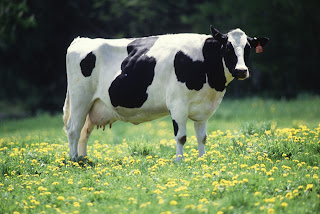 There's a invisible schism in our monster manuals.

On one hand, you have all the real-world animals.  Cows and horses and cats.  These animals do not have any magical powers.

On the other hand, you have all the imaginary animals.  Manticores and dragons and catoblepas.  These animals are usually loaded down with a smorgasbord of magical powers.

There isn't really any reason to say that Earthly animals lack powers and imaginary animals have them, except that the audience (us gamers) is already familiar with non-magical cows and non-magical cats.

To put it another way, there's no reason that a fantasy setting share our concept of mundanity and fantasticality except the convenience of familiarity.  To a Centerran, the following things are all equally magical (and equally non-magical): how a child is conceived, how a dragon breathes fire, how a tiny spider bite can kill, how a zombie is raised from the dead.

Yes, it is good to have mundane places and plots in your game.  Yes, it keeps the fantastic feeling fantastic.

Yes, it is good to have familiar pieces of world in your game. The reason we keep circling psuedo-medieval settings is because we (think we) are familiar enough with that setting to just jump right in, start asking for directions to the nearest castle, order some mead, and tip the saucy bar wench for good gossip.

There are other good settings that depart from the familiar milieu (see the excellent Yoon-Suin) but aren't as immediately accessible the way vanilla fantasy is--and don't underestimate the value of that familiarity.  Players depend on that familiarity to make informed choices.  But I'm digressing, aren't I?  This is all your fault.

There are two ways to disrupt this implicit sorting of the bestiary into the non-magical actual and the magical imaginary.

You could have fantastic creatures be, in actuality, mundane.  Dragons are just big lizards.  Unicorns are just hollow-boned horses with a hood ornament and an eating disorder.

This sort of thing could be fun, I think, in very small amounts.  Plans are disrupted when the will-o-the-wisps actually are burning gas clouds after all.  The players go out to slay the chimera, only to discover that it is just three animals sewn together (but no less deadly because of this).

But really, the reason I started writing this post was so that I could talk about making mundane animals less mundane.  That's why

There Are No Mundane Animals in Centerra

Sure, there are settings that do simple replacements.  Instead of horses, everyone rides giant lizards or giant, flatulent ducks or something.  These are cool, I guess, and they help define a setting and/or make it feel more alien, and that's sometimes desirable.  But this isn't really what I'm going for either.

There's the extreme example, where all the mundane animals are extremely magical.  All cats can talk and all cows can breath fire, for example.  But once you go this drastic, you (a) lose that valuable familiarity, which impacts players abilities to make informed choices, which will reveal itself when a PC dies attempting to steal a cow they thought couldn't breath fire, and (b) the in-game implications are drastic, because how can you keep cats as mere pets when they can talk?

I favor a moderate approach when sprucing up mundane animals.  You need to add to them in a way that doesn't disrupt their ecology, but is both interesting and hella gamable.  The perfect example of this is Zak's Snakes Are Books.  The other way is to add to them culturally, like what Scrap always does, and just write about the fucked-up ways that people interact with animals.  That way, any weirdness that Centerran animals have is optional, and no one cares if a DM/player forgets/ignores it.

Anyway, here's my take on it.  No Centerran animal is mundane (and most of them are much smarter than they would be in the real world).

Rats are the quintessential foodstuff.  Fried rat-on-a-stick is the most ubiquitous city-food around, and adventurers often buy whole chains of rat jerky (neatly tied together by their tails).  Alchemical rats are fed alchemical diets, and are usually poisoned as their flesh turns into what is basically a poison.  You can sometimes find a couple of them in wizard laboratories--they're just a common potion analogue.  In the distant north, rats are not seen as delicious foods and are instead considered a pest; bounties on rat tails are common (and rat farming is a common, though illegal, profession).

Dogs form cabals and secret courts.  They ape the organization of human kingdoms.  They are forbidden to allow any human to learn of their secret organizations.  (Many dogs do, because of conflicting loyalties.)  Many dog attacks are simply dogs attempting to cover up their clandestine activities via murder.  Many cities have dog barons and dog dukes, who rule in secret and divide up the street-territories among their loyal vassals.  Their edicts are passed by twilight bark.

Wolves despise dogs, who are simply wolves that swore to protect humanity.  Many wolves worship demons, and different wolf packs will make different offerings to different demon lords.  A wolf that is possessed by a demon is called a worg.  They grow to tremendous sizes, and are capable of speech.

Cats all believe that they are royalty.  There is an entire branch of magic that revolves around cats, for some reason, mostly involving death, curses, and oaths.  There are also catbooks.

Cows have an affinity for the moon.  They always face it when they sleep.  Lunar cows exist on the moon--they have no legs, and instead hover around.  They are otherwise just like normal cows, and you can buy them in the Ba Dwai La marketplace.

Songbirds are the reincarnated spirits of cowards.  Warriors are expected to kill them when they come within arms reach.  The once exception are greywings, which are small birds that eat ghosts and the souls of the damned.  They gather at hospitals, and when there is a death, they will wheel furiously through the air, hunting the spirit; they will catch it if it tarries.

Pigs never stop growing.  Some farms have 10,000 lb pigs, the size of a small barn.  These giant pigs are mostly used for expensive parties, because people like to sit inside the rib cage of the animal, at a table made from its hips, while they eat it.  Giant boars exist, and are unfortunately common in some parts of the woods.
In many places, the farming of these pigs is bound by certain sumptuary laws, and only the nobility may grow a pig above a certain size.

Goats are freshly minted souls who have never reincarnated.  Because of their purity, they make excellent sacrifices.

Tigers always return as ghosts when they are killed.

Panthers speak all languages and are evil, honorable, and utterly merciless.  They sometimes chat their food up before hunting it, or give it a head start.

Chickens are powerful tools of divination, if their head is cut off when they are small and then raised to adulthood without a head.  These are called findybirds or witch chickens, and each chicken can find a single item once (as find the path) before dropping dead.  They are considered blasphemous by the church.

Roosters crow at down, but they also get confused during solar eclipses and crow then, too.  This reaction to darkness extends to the metaphysical; when something really terrible happens, the first sign is usually all the roosters going off at once.

Foxes are imaginary creatures that exist only in dreams.  For reasons they can't explain, everyone knows what a fox looks like, but no one can ever remember having seen one.

Snakes are sacred animals to the Church, especially blue snakes.  Priests are usually identified by the blue snakes that they wear.  There are different locations to wear one's snake--in a coil atop your head, around your neck, woven through your beard, intravaginally (part of one's vow of chastity), or in a special phylactery that resembles a pharaonic beard.
Squids are capable of interplanetary travel, but only during certain times of the year, if the rain is heavy and food is not abundant.
Posted by Arnold K at 12:50 AM