When you start off playing a Reincarnator/Reincarnatrix, you don't have any abilities, except one.


When you die, your remains undergo some strange process and return to life 24 hours later.  If you were dismembered or eaten, you cannot resurrect.  If you resurrect in a sealed coffin or under a pile of rubbled, you will probably die again.

Whenever you resurrect, you accumulate some small detail or affection (in addition to whatever power that death granted you).

I actually thought up three different versions of this class, each flavored a different way.

If you actually want to play this class, just base it on the cleric with all the spells and turning stripped away. 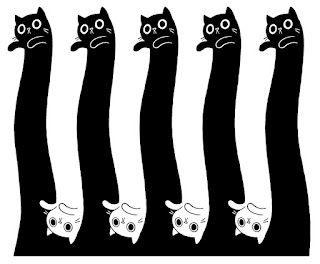 Sometimes a woman is pregnant, and sometimes she has a cat she loves very much, and who loves her in return.

And sometimes--through a process that no one can explain satisfactorily--the cat gives birth to the woman's baby, even after her death.  (If you cut the dead pregnant lady open, you will find nothing inside).

These children grow up normally, except that they have a cat tail.  This is their extra life.  As they level up, they grow more cat tails.

You are pissed off.  Hatred fuels you; anger gives you voice.  You only feel energized when you are kicking something to death.  And all that's before your first death.

You're still pissed off.

Unique Rule: You can use speak with dead on any zombie.  Whenever you return from the dead, you get +2 to all d20 rolls that involve directly killing the specific creature that killed you.  (If you weren't killed by a specific creature (e.g. rocks fell), this has no effect).

Basically, whenever you die, the Bureaucracy of Heaven takes 24 hours processing your forms in triplicate (or 777licate), and then returns you to life, in order that you can pursue some obscure destiny that has been lost in one of the infinite codices of Heaven.

Unique Rule: You can use commune 1/day.  Each extra life that you currently have gives you +1 to your Save.  Expect weird heralds to periodically appear before you, demand a progress report, and make inscrutable suggestions.

You can also be a demonic version of this class (Agent of Hell) which sounds way more fun, now that I type it out.  But as a demon, you'd probably be in service to a paladin family, who will probably be way meaner to you (as an unsouled abomination) than any real demonic overlord. 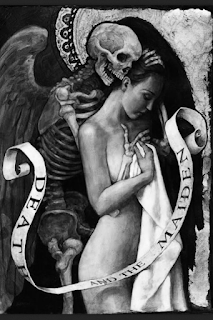 
So I'm going to give you a table.  It'll tell you the abilities you get if you die in a certain way BUT there is a catch.  Depending on how you die (aggressively, defensively, or other) you get a different ability.  So if you want to insist on dying in fires (players are weird, or maybe your campaign just has a lot of dragons) you'll have more fire stuff to give them.

Defensive = trying to not get killed, or trying to save someone/something else

Death By Acid
Agg = acid arrow 3/day.
Def = Reduce all acid damage by 6.
Other = You have acid blood that can (slowly) melt through small metal items (like locks).  Bleeding yourself costs 1 point of damage per HD.  Creatures who hit you in melee with piercing or slashing attacks take 1d4 acid damage if they fail a Dex check.

Death By Bludgeoning
Agg = Once per day, you can headbutt something, thus duplicating the shatter and knock spells.
Def = By spending a turn concentrating, you can manifest or de-manifest a set of medium armor.
Other = If you wish, you can behave as if you were boneless (allowing you to slip under most doors, for example, but only veeeerrrrry slooowwwwlly and helplessly).

Death By Death
Agg = You are now a vampire, with all the benefits and costs that entails.  Remember that you can only sleep in your own coffin.
Def = You are immune to level drain.
Other = You can cast raise dead to create a loyal zombie.  You can only have one loyal zombie at a time.  Zombies who are not your most recent zombie revert to being corpses.

Death By Devouring
Agg = You can devour things that you are grappling.  Target must not be larger than you, nor must it have more HP than you.  Target gets a save to avoid.  Devoured targets disappear utterly.
Def = If you are ever swallowed, you deal double damage to the creature that swallowed you.
Other = You can hold a bunch of stuff in your stomach, and regurgitate it safely as need it.  You can hold about as much as a large chest.  This doesn't make you any fatter or heavier.

Death By Drowning
Agg = You can turn into a fucking shark (HD = your HD + 1).  This doesn't transform your gear.
Def = You can breathe water.
Other = You can cast summon fish 1/location (this is the version that has a 5% chance to summon something horrible).

Death By Falling
Agg = If you jump down onto a creature as part of an attack and successfully hit them, they take all of your fall damage (instead of splitting it, normally).  You get +2 to hit on these attacks.
Def = Feather fall 1/day.
Other = You know the language of birds.

Death By Ice
Agg = Cut your HP in half to make a simulcrum with 1 HP.  You sleep while the simulcrum is active, but you can control the simulcrum.  It looks like you, except made of ice.  It has none of your class abilities (such as spellcasting).
Def = Reduce all ice damage by 6.
Other = You can step into mirrors and hang out in there.  Space inside mirrors is limited to the mirror's line of sight.  If someone covers the mirror (obstructing its line of sight) you are trapped there until it is removed.

Death By Impaling
Agg = Whenever an arrow misses you, you can catch it.  Usable 1/turn.
Def = You are immune to critical hits.
Other = One of your death wounds never healed.  You bleed whenever there is a concealed weapon nearby (allies' concealed weapons don't count).

Death By Lightning
Agg = All javelins and spears you throw deal and extra +1d6 damage, but this destroys the spear in the process.
Def = Reduce all lightning damage by 6.
Other = You can shock a dead person back to life.  If they make a save, they return to life.  Only works within 1 turn of their death, and leaves them in the worst condition possible in your system (but still alive and stable).

Death By Poison
Agg = You have a lethal poison bite.  Usable 1/day.
Def = You are immune to poison.
Other = You can write a poisonous idea down.  Must be at least 1 full page.  Anyone who reads the whole thing must save or die.  Usable 1/day.

Death By Being Gnawed To Death By Horrible Rats
Agg = You can stealth as well as a rogue of your level.
Def = You are immune to disease.
Other = You can scavenge (whenever you find a pile of junk, make a Save.  If you succeed, you find an item.  95% = mundane, 5% = magical.)

Death By Slashing
Agg = Whenever an opponent misses you with a sword attack, you get a free counter-attack.  Usable 1/turn.
Def = You can turn aside blows with your non-dominant (and empty) hand as if it were a shield.  You can "sunder" your hand, but this breaks it for 2d6 days.
Other = Whenever you bleed, you create a tiny blood homunculus (about 1" tall) for every 3 points of damage you took.  These little guys last 1 minute and have Str 0.1, but they'll obey your every command.

Death By Weird
Agg = You can screech at things within 50'.  If they fail a save, they take 1d12 damage.  If they make their save, you take 1d4 damage.  Only works on things with eardrums.
Def = At will, you can travel through time. Flip a coin.  On a tails, you go back 6 seconds in time.  On a heads, you go 6 seconds forward.
Other = You can give someone a foot massage that results in an amazing orgasm. Alternatively, you can give someone a foot massage that will result in them dying in exactly 3 hours (save negates).
Posted by Arnold K at 2:21 AM