+Scrap Princess pointed me at a game called Undertale, and one of the cool things about the game is that you can complete the game without killing anyone.  And while this has been possible in other games via stealth (Deus Ex, Metal Gear Solids), Undertale is unique in that you can talk your way through combat.  You eventually convince your opponent to stop attacking you.

So, is my hippy whore class.  There's no sex mechanics, thank god, but even then, this class isn't going to appeal to all parties.

Leading a skeleton back to his crypt after calling him by name is poetic and cool, but how many GMs name their skeletons?  Or have systems in place for figuring out where a skeleton's proper resting place is?  At the very worst, the concubine will be reading names off tombstones like a role call.

Actually, I'm okay with that.

And pacify is a potentially powerful skill, but I'm worried about how well it scales.  It basically attacks a different HP pool, which means that it's wasted on Godzilla (who will die from HP damage first, from the other party members), but it's great for convincing lone goblins to throw down their swords and cry green tears of repentance.  But that's also as it should be.  Pacifists shouldn't have very many tools against Godzilla. . .

. . . except you read the text for pain split, and realize that they actually have a pretty good answer for Godzilla.. 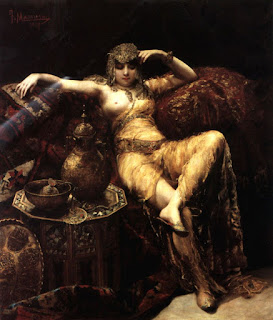 They're basically temple prostitutes.  Except you can't call them prostitutes, because prostitution is illegal in all the places that the Church oversees.  They have a moral monopoly on extramarital sex.

This outrages a lot of people (justifiably), but any attempts to attack the institution of the Church's concubines is met with a lot of resistance, because the concubines are incredibly popular.

So lots of people use them to get off in a guilt-free way.  So that's probably the primary use of them.  But for many people, they're also their psychiatrist, their doctor, and their astrologer.  They are intensely empathetic people, and they genuinely care about the men and women who walk into their boudoirs.

Because for some of those people, their concubine is their only friend.

As always, base this off a cleric class and just strip away the spellcasting and turn undead.

I'm going to use feminine pronouns, but divine concubines can be whatever gender you want.

A rational reason for non-combat always works, but you could also try compliments, appeals to honor, begging, etc.  Each time you attempt to pacify a creature, you must provide a different justification.

If the creature is simultaneously being threatened or attacked by the concubine's allies, the pacification damage is halved.

Each odd-numbered level, the conviction damage of this ability increases by 1 die size, up to 1d12 at level 7.

This ability is limited by communication (language, range of hearing, sentience, etc).  You can't talk an ooze out of attacking, for example.

Beautiful
Anyone that damages a divine concubine must make a save at the beginning of their next turn.  If they fail, they are unwilling to attack the divine concubine for one round.  If the concubine or her allies are being aggressive, the target gets a +4 bonus on this save.

First Kiss
Your kisses function as a charm person spell.

Life Share
While touching a willing ally, you can redistribute HP, curses, diseases, or poisons as you see fit.  You can only redistribute one of these per round. (This is mostly an inter-PC ability.  NPCs will be very wary of using this ability, and charm person is not sufficient to get a person to accept a curse, poison, or disease.)

Immaculate
Mindless undead are not aggressive towards a divine concubine; they will not attack if merely disturbed.  They will still attack if you behave aggressively or disturb something they are charged with protecting.  This protection does not extend to your allies.  And of course, they will attack if their necromancer gives them a direct order.

If you address them by name, they will allow themselves to be led to their proper resting place, but nowhere else.

Sentient undead know and respect divine concubines, and will usually attack them last.  Or at least, give her an opportunity to flee after killing all her companions.

Pain Split
You touch an unwilling creature.  If they fail a save, both your HP total and your target's HP total are set to the average of both of your totals.  This cannot increase HP beyond your maximum.  (Example: You have 4 HP and touch an ogre with 20 HP.  After the ogre fails its save, you both have 12 HP.)

Last Massage
If you give someone the final massage, they must make a save vs heart attack 1d6 turns later.  A final massage takes 10 minutes, and cannot be performed on unwilling targets.  This usually takes the form of a foot massage.

Yes, this includes sex, but it actually includes any activity that meets the following criteria:


Intimacy can have one of the following effects.
The concubine can have as many bonds as they have concubine levels.  Bonds confer the following effects, all of which are mutual.
Lastly, target's who have bonded with the concubine and are within 20' of her get +2 save against any negative mind-affecting effect.  If they suffer from a permanent insanity, the effects are also suppressed (but not removed).
Posted by Arnold K at 3:08 AM