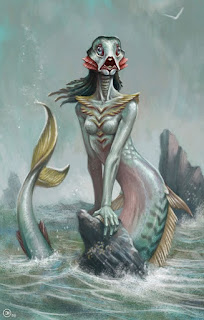 If you haven't already, read this first.  This is basically just speculation on how a mermaid/human oceanic arms race would evolve, with the final end goal of turning ocean travel into Fury Road.

These make ships slower, but more resilient to drills.  Mermaid drills are long (a couple feet) to ensure that they can drill through whatever hull they need to.  Most ships either specialize in speed or defense (because you can't have both).

Used near populated human coasts.  This ship has a smooth hull on the bottom and a spike covered hull on the top (upside down, with a mast rising from it).  When under attack by mermaids, the two hulls are closed and the ship flipped upside down.  Signal smoke is released, and the heavily defensible urchin ship then endures a siege until help arrives.

They have many portholes to strike out from with spears or arrows.

By dumping cow flesh and blood into the ocean, a bunch of sharks can be convinced to follow the boat.  This doesn't inconvenience the crew, but the sharks can be a lot of trouble for mermaids, especially once blood starts spilling into the water.

You can't train sharks.  They're meat engines, nothing more.

Mermaids counter this with trained dolphins, tattooed with fearsome reds and blacks.  Many of the domesticated dolphins have "horns" affixed to their heads to better stab sharks.  On very rare occasions, you may see a narwhal, but mermaids don't tolerate cold waters well and narwhals rarely venture into warmer waters.

Cover a ship with propellers.  More propellers are better at chopping mermaids into chum.  (They tend to clog easily, though).

Nearly all sea-going ships can be rowed in a pinch.  Often a burst of speed is all you need to outmaneuver your opponents.  Not maneuverability.  Not weaponry.

One way to keep mermaids from attaching themselves to your hull is to have a hull that is continuously moving.  Tread ships are basically giant wooden tank treads that float.  The crew gets inside them and then walks forward on the inside of the treads, sort of uphill.  This rotates the paddle-treads which propels the boat.

They are capable of short bursts of speed, but since there is not much space inside one for cargo or beds, they far poorly on long trips or open ocean.

Sometimes tread ships are linked together and used to support a combat platform (it is easier to fire down into the water if you have some altitude).  In this case, they may look more like wagon wheels (but are still filled with people turning the paddle-treads like hamster wheels.

Its just a net with lead weights.  Throw it in the ocean and it will sink to the bottom, hopefully carrying a mermaid with it.  (In the open ocean, this is fatal to the merfolk.  Only merfolk priests can survive the deeps, and then only with special preparations.) 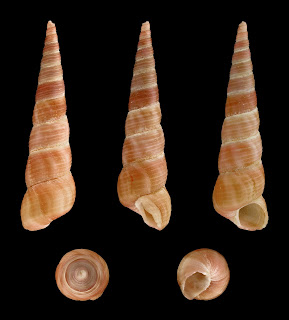 Similar to tread ships, these are giant spiral snail shells (turriform, the pointy kind) that have been converted into ships.  Merfolk use them to defend themselves against other merfolk, but also to ram ships of all sorts.

Basically, the entire shell rotates.  This drives the ship forward.  Merfolk on the inside swim in circles in order to turn the propeller at the back of the spiral shell ship.  They have awful maneuverability (because the rudder rotates as well, just slower than the ship does) and very short range (because they must be actively powered).

They are mostly used by merfolk to defend their cities.  Ships that attack Valdina (the largest merfolk city) are sometimes impaled by these huge things.  They are docked in hidden caves on the sea bed.

These are also made from giant spiral shells (again, the pointy kind) but they are sized for an individual mermaid, not an entire crew.  They are stored on the sea bed in silos (like missiles) where they are anchored.  They are filled with an air bladder and a mermaid pilot.

When the anchor is cut, the whole vessel begins to rapidly ascend.  The air in the bladder expands, making the drill more buoyant as it rises.  The mermaid inside guides and accelerates it manually (or at least, caudally).  And then the whole thing hopefully connects with the hull of a ship, punching a hole into it.

These are clay pots filled with poison, bolted to the inside of the hull.  The pot's mouth faces the hull and the whole thing is sealed to prevent leakage.  It contains poison.

If a merfolk drill punctures the hull in that location, it spills the poison into the water, killing the adjacent merfolk and hopefully buying the ship enough time to free itself from the snares.

In some ships, honeypots compete with cargo space.

Some ships are dedicated to this singular purpose.  While these honeypot ships look like a soft target (unarmored, mercantile) they are filled with poison (and cancerous sailors).

Merfolk use oil fires on the surface to cut off avenues of escape and befoul the air.  If they ever need to lay siege to a ship, surface fires will eventually be involved at some point.

Sailing through an oil fire is not too injurious to a ship, but if explosive gases are added to the mix, it can get hellish.  Methane and hydrogen can be generated in whale carcasses alchemically and transported in compressed balloons, or simply released from the whale carcass all at once.

You think you're safe from pillars of fire just because you're on the ocean?  Do you know how much petroleum is down there?

Merfolk have many, may ways of sticking a harpoon into a boat.  It's really their first resort.  They hunt ships with harpoons the same way that whaling boats hunt whales.  Attach a line, tire them out, and keep them bleeding.

There is no such thing as a warm-water civilian fishing fleet in Centerra.  While there are plenty of fishing boats, these ships are well-used to combating merfolk.  In large numbers, fishing boats can scoop up merfolk with remarkable success.

These are ships that are built to pass a net the length of the ship, from prow to stern.  The ship basically keelhauls a net longitudinally, rather than transversely.  The idea is that this net sweeps up all the hull drillers and hauls them onto the deck where they can be clubbed to death by scared sailors.

In practice, the systems are unwieldy and prone to breaking.  They also get cut apart quite quickly--after a couple of passes, they are basically just rags.  Merfolk have learned to be quick with their knives.

Chain nets work better, but have their own drawbacks.

There are sea monsters, and the merfolk enslave them and use them to sink ships.  Everyone knows that.

But what is less known is that many human ships travel with a sea monster locked in the hold, to be dumped overboard when the sound of drilling has driven out all other options.

Sea monsters are difficult to manage when they are locked in a tank, but they are nightmares when they are released into the water, pissed off and hungry.

Within the Sea of Sargros, these air-kelps form the deep sargassos and sky forests.  (Yes, you can sail through a forest with kelp fronds towering over you.  Yes, there is wildlife.)  Airkelps in the Sea of Sargros are so plentiful that the merfolk use them to make sky nets.

These are simply ship-catching nets anchored to the sea floor.  When they are cut loose, they rise into the air, sometimes as high as a 100'.  They're basically just nets with one side tied to the seafloor and the other side tied to balloons.  Have fun with that. 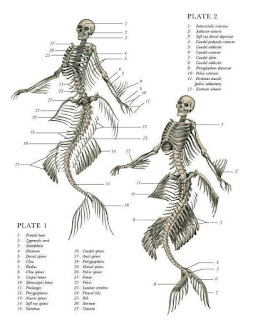 Hull Listener.  Traditionally the oldest guy on the ship.  Ideally blind as well.  (But honestly, all sailors sleep with their ears to the hull.)

Keel Sharpener.  Most hulls to bladed to cut through snags and ropes.  Some are sawtoothed, and use the rocking of the waves to their advantage.

Brine Spikers.  A more intense variant of a harpooner.  Jump off the yards with a heavy harpoon wrapped between their legs.  The idea is to stab a mermaid even though he's pretty far down (water kills momentum pretty quickly.  They might even carry a second weapon to stab a few more merfolk.  After a couple of seconds, they are pulled back on the ship, either by a bungee or by other crewmen.

Tarboys. These are the crazy bastards who have to repair holes in the hull while the ship is still sailing.  For large holes, this is impossible to fix from the inside (water pressure), so they must fix the holes from the outside.

How Other People Handle Merfolk

By and large, they don't bother.  Humans are the only ones dumb enough to tangle with them.

Ice Giants no problem with merfolk.  When they sail from pole to pole on their iceberg ships, merfolk avoid the cold water and impenetrable hulls.  When you sail on a giant fucking iceberg covered with hundreds of sails, you don't fear sinking, you fear being boarded.  Or melting.

Elves poison the water with terrifying efficiency.  The fewer things living in the ocean, the more beautiful it is.  (The prettiest ponds are the ones with the least life in it.  Same concept.  They would turn the ocean into a clorinated, indoor pool if they could.)

Darklanders have monsters of their own.  Most of their ships are pulled by some great beast or another (otterworms, bangoos, thruxiderms, etc) and so it invariable devolves into a bloodbath.  Darklanders are also quick to jump into the water and take the fight to the merfolk.  They generally have a harder time dealing with merfolk than honest Centerrans do, but frequently the sharks are the only winners.
Posted by Arnold K at 2:42 AM