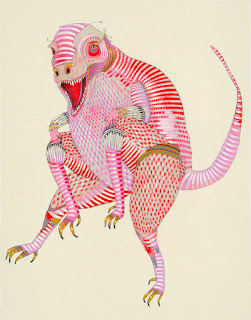 Psuedo-Imaginary Dinosaurs are the servants of Tyroganon Ferox, the Paradox Lord of the Infinite Boneyard.  No other creature would (or could) serve the lord of temporal paradoxes.

Combat only gets interesting if some people make their save while others fail it.  Players who have ignored the dinosaur cannot affect it or interact with it in any way, and vice versa.  On the other hand, players who failed their save may be crushed, knocked about, or even picked up and swallowed by.  To their more willful companions, they appear to be flying through the air and leaking blood for no reason.

Technically, the dinosaur is reflecting itself off the mind of its victim.  The people who failed their saves have a small part of their minds hijacked, and it is this part of their mind that is actually performing telekinesis in imitation of a dinosaur that isn't real (in the strictest sense of the word).

The halflings of the psychogenic jungles know this.  A fortress with no one in it will never be molested by imaginary dinosaurs, but if one halfling passes through, catches sight of one of Tyroganon's servants and believes in it, the entire fortress can be destroyed.

Consequently, many of the halflings are experienced in the use of the lead button, which is a heavy button sewn on the inside wrist of their jackets.  Halflings who see and believe in dinosaurs know to quickly knock themselves unconscious with it before the dinosaur can tear them apart.

The dinosaurs come in all shapes and colors that you can imagine, literally.  And sure--they sometimes incorporate elements of what you are thinking about, your greatest fears, whatever.  Don't think about titties when you see one.  They are intelligent enough to follow a 'believer' back to a larger group where they can get more people to believe in them.

If someone is still riding a dinosaur when it dies (disappears) they also disappear, because their being in that position was dependent on the dinosaur.  Their circumstance (being 8' off the ground) depending on something that was semi-imaginary, and so they inherited that semi-imaginariness.  People who disappear in this way must succeed on a save to reappear in 1d6 rounds.  If they fail, they are gone forever.

Usage: Don't overuse these guys.  Sometimes combat will occur where four PCs will be fighting a dinosaur while the fifth PC just watches them, completely unable to help.  PCs can choose to fail their saving throw, but this must be done at the same time as everyone else.
Posted by Arnold K at 6:50 PM