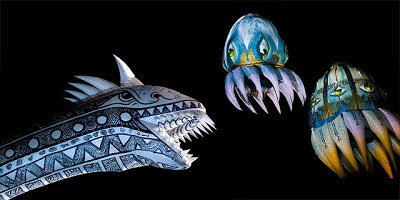 Hagulas, more commonly called “haggers”, are humanoid fish (a proprietary blend of lamprey, catfish, and hagfish).  They are more formally called myere, which means “honorable egg”.  If you want to insult one, call him a churlfish.  They stand between 5’ to 7’ tall and have sinuous, slimy bodies.  Their movements are lightning quick and their skin is like wet rubber coated with fine grit.  They smell like dirt, metal, and water.  Their broad faces are mostly just a mouth ringed by four barbels (like a catfish).  Their beady black eyes are tucked in behind this, along the sides of their head.  They cannot see straight ahead, and so turn their heads sideways when they want to look at you.  They are fully amphibious and take great pride in their paddle-like tails.

Once a male hagger reaches maturity, he becomes able to breathe air, and they can only get nourishment by drinking blood through their teeth, which cluster in rows like stubby hypodermic needles.  These physiological occur in order to their bodies for fusion with a female.   Males attach themselves to the females by fusing their jaws into the female’s body, and eventually sharing a bloodstream as the males atrophy into little more than gonads with faces, that provide the much huger female with the sperm she needs to lay more eggs.  Females are huge things with the size and habits of orca whales.  They are also beautifully intelligent, eloquent, and usually ravenous. While the females hunt along the shores, they are capable of lurching around on land if they are very hungry.  They are most comfortable at the bottom of ocean trenches, where they have their secret places.

Unsurprisingly, a lot of males decide being their mate’s gonad isn’t the life they want.  These ‘bachelor’ males are numerous, and you can find them around the shores and ruins of America’s newly submerged cities.  They run clinics by the shoreline, where body alterations are provided.  They salvage and sell scrap from our sunken cities.  They manage huge manatee farms, where they harvest most of the blood that sustains them.  Some of them go to sea, and live for years attached to a whale like a remora, sucking blood all day long in a lifestyle reminiscent of their homeworld.  Some poor ones become beggars, and sit outside of stores begging for blood from humans.  Just a drop, mister. . .

They are quick witted, secretive, and rarely take charge.  They are sluggish unless they are very motivated, usually by someone yelling at them.  They are fond of irony, sarcasm, and reversals.  Most of them don’t handle disappointment very well, and are prone to throw tantrums or disown their friends, depending on the type of disappointment. Oftentimes, they will say something only to say the exact opposite a few seconds later. . . not!  Alcohol and chocolate are deadly poisons to them, and they are known for their persistent expressions of gratitude, which are often in poor taste.  Smiling is not reflexive for them, but they do it frequently just to freak people out with their rows of teeth.  the “lips” they talk with are behind these teeth, so their voices always seem to be coming out out from their throats.

Haggers are masters of biology.  Flesh is putty in their hands, and they have even found a way to reverse aging (though it only works on haggers). They run clinics around the world that are capable of healing any injury, redesigning creatures to be more awesome, and even bringing people back from the dead.  All they need is your brain to resurrect you, and if the brain is fresh enough, you even get to keep 50%, 60%, or maybe even 70% of your memories!  Of course, all of their procedures carry a certain risk of mutation.  That’s tough to shake.  But think what a great conversation starter you will have with a line of fingers growing out of your spine!  Aside from resurrection, you can also pay the haggers to reroll your HP dice.

Be all that you can be!