The Cave of the Druid

This is a mini-dungeon.  Plop it down wherever there is a forest.

Why is the Party Going Here?

The forest around the thicket is full of Irritable Trees.  The party will encounter 1d6 of them on the way there, or 1d4 if they avoid the most obvious path.

If the party is belligerent (loud, carrying fire, visible axes, threatening the forest, attacking trees) they will be attacked by an additional 1d4 Hateful Trees and 1 HD 8 Treant.  The party will not be attacked if they show deference to the trees (e.g. avoiding their roots, addressing the trees with terms of respect, asking permission, leaving axes behind) they'll get attacked by one less tree for each action taken.

Being aggressive towards the forest is a very terrible idea.  It's a bit like attacking a city, while you are in the middle of the city and vastly outnumbered.

The average tree strongly dislikes humans (-4 to reaction rolls).  Humans are things with the metal bites and the domesticated fire.

Trees are slow things, with thoughts that flow like thick sap.  To them, humans are as fast and as ephemeral as gnats.  Fire moves as fast as an explosion.  Chopping down a tree happens as fast as they can react, and is an act of sudden, unexpected horror, more similar to being struck by lightning than an act of premeditated malice.

With the egocentrism common to pretty much all sentient species, the subject of human sentience is the subject of both ridicule and speculation among trees.

A bloodstained menhir.  Biting flies cause pain but no damage.  Parties would be forgiven for thinking that the real danger is a fly swarm.  The flies attack anyone who is not sufficiently dirty; if the players have been living rough for at least a week, they may pass the flies unmolested.

The guardian of the cave mouth is a Hateful Tree.  It doesn't let anyone into the save except those that it recognizes, and the only people it recognizes are the High Druid and his family.

Off to the right is a refuse pile (mostly plant waste and feces).  The party can hear a stream a few hundred feet off to the right.

Animals avoid this place unless they are here to petition the druid for some favor.  Roll a d4 to see if an animal is waiting a respectable distance away:

1  No animals are waiting here.
2 A wolf is here.  She wants to forget all memories of her dead mate.  They are too painful.
3 A fat chickadee desires that his romantic rival be devoured by a hawk.  He is willing to offer lifelong servitude, so great is his hate.
4 An opossum.  She has lost her baby.  She offers her flesh for his safety.

If the party waits, the second or third wife will emerge from the cave to perform some chore (foraging, drinking water, examining petitioners) after 1d6 turns (10-60 minutes). 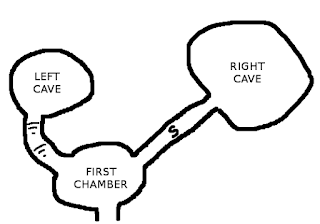 This is where the high druid lives with his three wives, eight year old son, and two babies.  The babies are non-combatants, and the remaining ones are level 1 fighters except for the first wife.

Third Wife  HD 1  AC none  Grapple  She "wears" 4 vipers (poison 1d6) around her neck, wrists, and the breast that her baby isn't currently suckling on.  She's young.

First Wife is an actual grizzly bear.  She sleeps a lot and will only be roused by someone shaking her awake (probably the eight-year old).  HD 5.

The high druid isn't here.  (He's decided that the village of Quarterway needs to be brought back to nature in a swift and brutal manner.)

The second wife speaks Common, albeit reluctantly and with obvious shame.  She has some family in Quarterway.  They're all assholes, which is why she ran away those 10 years ago.

Everyone is naked, in case that wasn't obvious.

The Second Wife can function as a sage.  She can identify things, describe the area, etc.  She doesn't accept money or anything that isn't a natural product.  Bread is an abomination, but milled grain might be okay for porridge.  A fresh-killed boar would be a very welcome gift.


Inside the cave is just three piles of animal furs and a shallow depression that collects water.

If they hear combat outside (such as someone trying to chop down the hateful tree), they'll come out.

There are two more chambers deeper in this cave: one to the left and one to the right.

A carpet of bones.

A deep pit, filled with toads and crickets (lured to this place by impulses they cannot understand or hope to overcome).

Grandmother squats on a rock, mumbling to the mosquitoes that perch on her hears, trading blood for news of distant places.  She holds a despondent toad.  Occasionally she'll raise it to her mouth an lick it.

She will not leave this cavern for anything, but she will almost certainly notice anyone entering.  She'll be watching for anyone coming into her cavern.

She will not respond to anyone except to growl at anyone she doesn't recognize.  Despite her appearance, she's not insane, just very grumpy.  She's also tripping pretty hard right now.

Behind her heel is a Phung pod, a very rare type of fruit that must be infected by a very rare fungus at a certain stage in its development.

If combat breaks out, if she is threatened, or if anyone walks into the room, she'll throw her Phung pod at them.  She's immune to the Phung pod's effects.

She has a second Phung pod, hidden in a hollow beneath her rock.

Upon being crushed, releases a thin cloud of spores 50' in diameter.  This cloud causes paralysis (no save).  On each subsequent turn, a creature may make a Con check to regain the use of one limb, determined randomly.  If a non-paralyzed limb is rolled, do not reroll--you don't regain the use of any limbs that round.

Make a Con check at the start of your turn.  If you succeed, roll a d6:
Grandmother is a level 1 fighter.  Her strategy is to run around as fast as she can, coup-de-gracing people by clubbing their temples with a rock or just biting out their jugular.  Either way, it's a Con vs Death, with success upgrading your condition to Dying.

The passage goes on for about 10 feet, then dead ends with a short upslope.  The dirt is loose back here, and a couple of red ferns grow on the walls.

Anyone digging out more than a couple of inches will reveal a crawl space.  The tunnel continues; it was just hidden by a minor amount of loose dirt.

The tunnel continues for another 50'.  The air grows warm and wet.  The walls become blanketed in those same red ferns.

Finally, the tunnel opens up into a circular cavern.  A pool sits at the center, surrounded by enormous red ferns and fed by a single drip from the ceiling.

At the bottom of the pool is the Origin of Species, clearly visible through the glass-like water.

The Origin of Species

Any living creature that touches it with their bare flesh is sucked in (no save).  Inside the egg cell, their flesh is pulled apart, their bones melted, and their brain rendered down into its component parts.  The egg rapidly begins to divide and grow.  Doubling in mass, quadrupling.  A symphony of organogenesis.  It is rapidly filling the cave.  Anyone who touches it at this point is also sucked in.

The Origin of Species will never suck in more than a total of two animals.  (If the first person who was sucked was carrying beef jerky or something, that will count as the second animal, and it will cease sucking in additional creatures.  If they are carrying multiple traces of DNA, use whichever sample is larger.  If a second animal doesn't touch it, assume that it sucks in a random cave organism [d4]: mushroom, cricket, salamander, mole.)

If a PC is sucked in, ask them about their character's personality.  Goals.  Habits.  Mannerisms.  Genetic defects.  Et cetera.  It'll be important.

The Origin of Species then rapidly gives birth to 2d6 x 10 creatures of a brand new species.  They'll be a mixture of whatever two species were used to initialize the egg.  This is the birth of a new species.  Revel in it, and extrapolate as much as possible.

For example, if the elf was sucked in while carrying a few strips of jerky and nagahide armor.  Since the armor is larger than the jerky, the Origin of Species produces a race of elf nagas.

Take this as far as you can.  If the elf PC used to laugh at fart jokes, then the elf naga race will probably develop a culture where fart jokes occupy an intimate and essential social function.  Marriages will be official when the bride and the groom fart in unison.  That sort of shit.

If the elf knew the grease spell, then all of the elf nagas will probably all know it innately.

God help them if they throw in something weird, like the corpse of the death knight who hated them and wears dragonscale armor.

But, assuming it was a PC that died, let the player recruit a new character from the freshly-spawned race.  The new race is probably going to have a major impact on the local environment, and the PCs are in a prime position to leverage that chaos to their own advantage.