They're only ever found as a wandering encounter.  And of course, you might very well find evidence of them before you bump into them directly.

Slitherhoof leaves weird tracks, like someone dragging a bundle of rugs.  You'll see little bits of blood, here and there.  Slitherhoof's skin was never designed to be pulled over so much of the forest.

Gobblehorse leaves normal horse footprints, except they're not in a straight line.  They wander like a drunkard.  Sometimes there are knee prints in the pine needles, where he stumbled.

Where you see one set of tracks, you'll find the other set nearby.  The two horses are never far apart.

After Slitherhoof succeeds in her hunt, she's always careful to save some for later.  She folds her kills in half and wedges them into holes.  You might come across a pair of boots sticking out of a hillside.  Looking closer, there's a pair of gloves in there, too.  If you pull the corpse out, you'll find a bandit bent backwards, spine broken, folded in half.  All of the tender bits will have already been eaten.  (Face, belly, ass.)

Gobblehorse doesn't leave much behind when he eats.  Just a pile of what looks like steaming, bloody puke full of well-chewed bones. 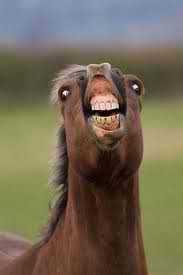 A sandy cave in a hillside.  Even standing outside, you can smell bile, like someone vomited on an empty stomach.

If you mapped it like a dungeon, it would only be two rooms.

The first room is a shallow descent.  Slitherhoof sleeps at the bottom, beneath the bones, looking like a pile of horse hide.  She's quiet.  She'll probably ambush the party.

Among the bones is a masterwork axe with three notches in the handle.

In the second room, the smell is stronger.  Gobblehorse sleeps here, wrapped in his nightmares, grunting like the scared animal that he is.

There's a tarnished suit of half-plate in here.  The smell will never quite leave it.  On a half-melted hand, there's also a ring made of poisonous black metal.  It causes subtle weakness in the arm when worn, and paralysis of the limb if it is worn for more than 4 hours.

There's a unicorn maker in Asria.

He claims that the baby unicorns come to him because they've lost their parents, and that they sense his gentleness.

That is a lie.  He's had to make each and every one of them from scratch.

Well, not quite from scratch.

The process requires a child, a foal, and a narwhal horn.  He's been doing it for decades, and has nearly perfected the process.  The resultant animals are gentle, intelligent, and good natured.  They look almost exactly like young unicorns, too.

Their upkeep however, is laborious.  Problems with skin that wants to slough.  Joints that gradually loosen in their sockets.

But no matter.  It's nothing he can't fix.

His name is Agamond.  I've written about him before.

Anyway, Slitherhoof and Gobblehorse are the byproducts of this process.  They're old foals that were left for dead on the cutting room floor, and survived despite their butchery.  Now they butcher back. 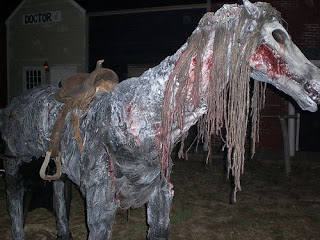 Slitherhorse is a boneless horse.  She moves by slithering.  Her sunken eyes and boneless head make her look like a bulky horse hide, until she moves, which she does with terrifying speed.  Like a rug sliding across the floor, untouched and with terrible purpose.

Gobblehorse looks like a headless horse.  His belly is distended and his knees are battered.  He reeks of bile.

NOTE:  They're always encountered as a wandering monster.  One horse will always be absent to begin with, but then join on the second round.  (The two horses hunt near each other, but not on top of each other.)

Tactics - Slitherhoof likes to grab someone from beneath, pull them into the ground, and then eat their legs.  She's very good at it.  If prey escapes, 50% chance she'll burrow beneath someone else and try again, 50% chance she'll risk a lunge.

Spew Acid - 30' cone.  Usable every 1d4 turns.  Does 1d6 damage the first turn, and on does decreasing damage on subsequent turns until washed off.  1d6-1 (min 0) damage on the second turn, 1d6-2 (min 0) damage on the third turn, etc.  Gobblehorse moans after using this ability, as the acid burns his throat.