Knights of the Pit

Knights of the Pit are basically fighters.  Give them the attack bonuses of a cleric, and instead have this ability:

Suicidal Tendencies: Whenever you are below half HP, you get the attack bonuses of a fighter.  You also get a bonus on damage equal to your level (max +6).

Some Knights of the Pit are pious.  Subtract one or two special fightery abilities that they might have in your system (parry, defensive roll, etc) and give them this ability instead.

Pious Heart of the Martyr: You can use detect evil once every 10 minutes.  If you are at least level 2, when you die, the creature that directly killed you (if any) must save or die.

Some Knights of the Pit are blasphemers.  Subtract one or two special fightery abilities that they might have in your system (parry, defensive roll, etc) and give them this ability instead.

Exploding Blasphemy Skulls: Whisper blasphemies into the ear of a decapitated head and then throw it.  This enrages the spirit inside the skull.  At the end of your turn, it explodes in a shower of boiling brain blood and angry ectoplasm.  This ability only works on the heads of sentient creatures that were capable of understanding your spoken language.

The exploding blasphemy skull does 1d6 damage for every 2 HD of the original creature (save for half).  Skulls work as well as decapitated heads, but they must be fully intact (no missing jaws, etc).  The chance that you'll actually enrage the ghost enough to explode its own skull requires a successful Blasphemy check.  If your system doesn't support blasphemy checks, use this table to determine your chance of success: 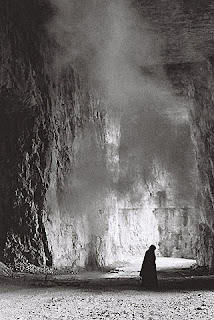 The Black Pit of Teradar

The Pit of Teradar is a prison built beneath the city.  It is widely considered inescapable.  The sentence term is almost always life.

The prisoners inside the Pit are thrown in there for crimes that have pissed off the emperor enough to warrant their entire removal, but are not severe enough for the Church to sanction their execution.  It is mostly fully of traitors, political prisoners, and those who have failed the new empire of Noth in some way.

Prisoners spend their days in labor.  They turn the gears that power the many machinations of the city: elevators, automatic gondolas, fountains, water pumps, and public trolleys.  There are hundred of unseen men beneath Teradar, toiling in the darkness for their daily gruel.

They are referred to by their job titles, rather than their names.  For example: Pump #9.

Control is maintained through vampirism*.  It is believed that most prisoners in the Black Pit are infected with vampirism, and they are fed with daily deliveries of blood jelly, collected from all of the slaughterhouses in the city.  The only place where prisoners can see the sun, and the central gathering place in the Black Pit, is the Courtyard of Mercy, where the sun can be seen for nine minutes at noon, at the top of the huge vertical shaft, through several layers of iron bars.

*Vampirism is a dreaded disease that inflicts a dietary restriction and a deadly allergy to sunlight.  Mystical vampire powers (though potent) only come much, much later, after the vampire has fed on the blood on hundreds of sentient creatures.  99% of vampires of young vampires who typically end up in short careers as mass murderers or outside the Cathedral of Two Blades, begging pilgrims to open their wrists.

Prison gangs rule different sections of the underground, and are largely given free reign as long as the wheels keep turning.  If the prisoners ever strike, or slack in their duty, entire sectors will be purged by the paladins of the Stayed Hand: opened to the sun, flooded with holy water, or simply stormed by hundreds of paladins and clerics.  The secret wheels of Teradar are never still for long.

Certain prisoners are eligible for release if at least three family members have died beside them in the Pit, and if they have not commited any crime serious enough to make the emperor doubt their loyalty.  These prisoners are given the offer to become Knights of the Pit.

Those who accept are geased by the paladins of the Stayed Hand.  There ceremony involves drinking a cup of sacred molten lead.  This does not kill them, but instead scars their lips, coarsens their voice, and other symptoms of lead poisoning.  The lead flows to their heart, where it forms the symbol of the Holy Serpentine Cage around the knight's heart.  If they should waver in their quest, the serpentine cage tightens painfully.  If they should ever fail utterly, the cage tightens fully, and they exist in debilitating agony until their deaths (which are usually immanent).

Their quest: to roam the world far from Noth's borders, where they may never return.  Until their deaths, they must wage war against the enemies of the Church without rest, respite, or comfort.  This usually means seeking out and slaying dragons, demons, and undead.  In theory, the geas can be lifted if the Knight of the Pit performs some great service to the Church in Noth, but this is exceptionally rare in practice.

A newly consecrated Knight of the Pit leaves Teradar pale with sacred ashes, dizzy with wine, and naked except for a black hair cloak and a sword.  Citizens are required touch their foreheads when the entourage passes, a show of respect that they must extend to all knights.

The city of Honored Kaskala has a similar order of traitor knights, except their geas is enforced by the removal of all reproductive organs, which will be returned only when the traitor knight has redeemed themselves.  Sometimes this neutering is extended to all family members, in order to completely extirpate any "traitorous bloodlines".

Many visitors to the city of Teradar never learn of the Black Pit.  The automatic gondolas and canal locks are usually believed to be magical, and the city itself is seen as a marvel of modern engineering, which of course, it is.