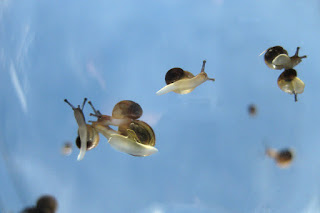 Flying Snails are huge for snails.  They have about 10 pounds of mass, and 0 pounds of weight.  They fly by spinning their bodies, travelling through the air like a drill while paddling their heads around in a circle.

Even if they didn't fly, they would be distinctive for their steel grey shells and bright orange bodies, like the pulp of a mango.

Flying snails don't look like snails.  They prey on birds and small animals, and camouflage themselves by gluing leaves and branches on top of themselves.

Flying snails are one of the few creatures that naturally (alchemically) produce a magic material.  Their shells have negative weight. A shell that would weigh 5 pounds, instead weighs negative 5 pounds. If you tie a shell weighing -5 lbs to a slug that weighs 5 pounds, the resulting object would be weightless.  It functions a bit like a balloon.

Except, unlike a balloon, a flying snail shell will actually leave the atmosphere and fly into space, avoiding all the planets and suns, and never falling into a stable orbit.

Digression: It is hypothesized that there may be planes and masses also made of antigravity-stuff, where normal gravity-stuff and antigravity-stuff are reversed, and the flying snail shell may indeed come into a stable orbit. Good luck landing on it.  Or even reaching it, since it is probably as far away from our half of the universe as it can get.

There is both a dance and a men's hat named after the flying snail.

While they were once common in the Abasinian mountains and hills, they have been hunted nearly to extinction.  Their shells are worth a fortune, and are incorporated into things in order to make them lighter, especially armor.

Because of the exotic effects of the poison, the flying snails are sometimes linked to the fire cults, and for that reason, are sometimes referred to as "demon snails of the inferno".

It is rumored that fire cults would catch devout members of the Church, sting them several times with the flying snails, and then abandon them in the woods to die from the poison.  The idea then, is to search for an antidote, of which none is known for certain (but many suggestions exist).

What is known, however, is that the last hierophant of the Zagyron fire cult was the only known person to have been executed by being flung into space, when he was locked inside a cage made from flying snail shell and allowed to fall upward.  If the cage was ever recovered, it would be worth a fortune.

The prince of Chengali has a pair of wings made from flying snail shell.  When strapped to his back, they make him so light that it becomes possible for him to fly.  He is rumored to spend his winters flying through the jasmine-scented canyons within the Royal Preserve.

Flying Snail
HD 1 AC plate Sting 1d3 + poison
Fly at walking speed Int 3 Mor 7
*Heartstopper Poison: Poison does no damage immediately, but creates a painful burning sensation that lingers for hours.  The next time you go to sleep, once you hit deep REM sleep (about 90 minutes after falling asleep), you will have horrible nightmares, usually about being burned alive.  At this point, make a Con check for each time you were stung since you last went to sleep.  For each check that you fail, take 1d6 damage, simultaneously.

Shells are worth 100gp if undamaged, or 50gp if damaged.

1. Some kids thought they saw a flying snail high up in a tree, hidden in the thick branches.  If you pay them 10gp, they'll tell you which tree.  Caveat: the kids are telling the truth, but there's not one snail up there; there's two.

2. A dungeon has fire cultists in it.  They all poison their spears with flying snail poison.  The PCs might feel their hearts fluttering after they've been hit a few times, but they won't know about the poison's deadly effects unless they ask a cultist or a cleric.  The antidote, of course, is inside a small room guarded by a guy who knows the sleep spell (which is now potentially very deadly).

3. An alchemist has obtained a rare ingredient (wendigo plasm) and wants your help with a very powerful experiment.  If you can bring him three flying snails, he can make you an elixir that permanently reverses a creature's gravity.
Posted by Arnold K at 2:10 AM