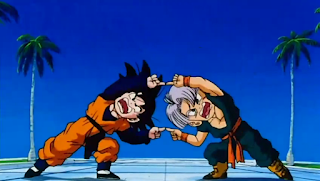 So there are things that swap brains around.  Sure, if you put a mind flayer inside a portable hole inside a pseudo-imaginary dinosaur, you might create a vortex that switches everyone's brains, thereby causing players to trade character sheets.

Everything is non-additive, except for HP.

If a character is composed of at least 4 constituent characters, it can make two actions (but not two movements) per turn.

If there is a disagreement over what actions the fused creature should take, controlling players can make Charisma checks to take control of the shared body.  If there are many people controlling the character, feel free to split into voting blocs and aid each other like any other ability score check.

They still count as a multiple group of people and track XP separately (so there's no problem if they de-fuse later).

Using Character Fusion in Your Game

The Fusion Door (dungeon)
It's a non-Euclidean doorway.  On one side, its two doors.  On the other side, it's one door.  It's only passable if two creatures walk through it simultaneously.  It allows access to one half of the dungeon that is populated entirely by fused creatures.  (If there are an odd number of players, one of them will have to fuse with an NPC or animal companion or something.)

Godhood (curse)
When players kill the omni-chimera, they are rewarded by being fused together into a wonderful fusion-beast.  This is a great reward.  Surely all the players will be thrilled with this, and they will not seek out a cure as soon as they can.

Magic Twins (character concept)
During character creation, two characters agree that they are magical twins (a class that I haven't written yet).  As their primary character ability, they can merge together and split apart, at-will.

One and Five Rings (magic item)
When multiple people wear these rings simultaneously within 10' of each other, they fuse together into a single creature.  When the fused creature removes the ring, they split (and you are left with a bunch of people holding rings).
Posted by Arnold K at 10:01 PM