The 1920s had lots of other weapons, too.  Most of which were developed in WW1.  Grenades, both in American Pineapple and German Potato Masher varieties existed.  Mortars had cool nicknames like "flying pigs" and "toffee apples".  Flamethrowers were awesome.  Tanks looked sort of stupid, but they were still really good at killing you, so whatever.

But poison gases were a thing.  The three big ones were Chlorine, Phosgene, and Mustard Gas.  Chlorine makes you cough and cough while it eats your lungs.  Phosgene just dissolves your lungs over the course of a couple of days.  And Mustard gas gives you blisters all over your body like holy shit.

Here are some of the posters they gave the troops. 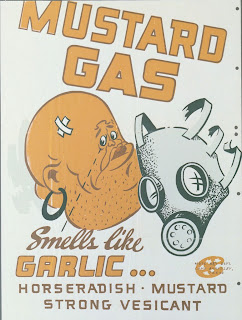 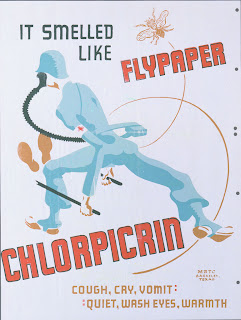 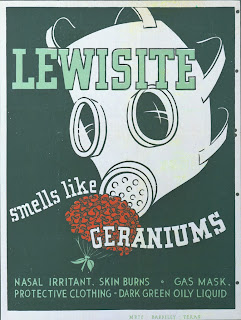 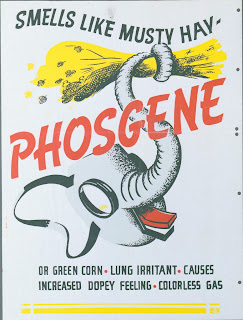 By the end of the war, they had decent gas masks that looked like what you think gas masks look like.  But the earliest gas masks looks like horrifying scarecrow dumpster babies. 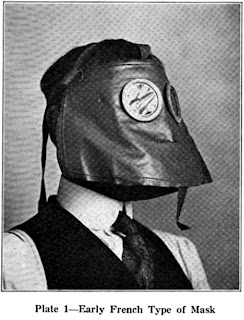 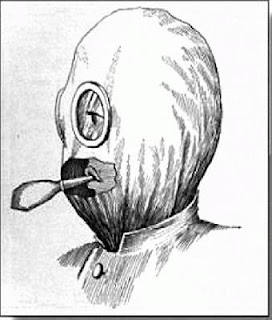 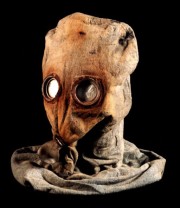 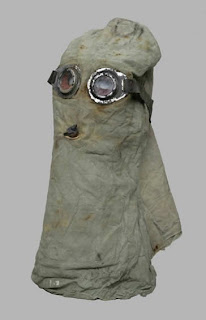 Which I think is more in line with what I want, so that's done. Alternative history in Eldritch Americana, gas masks all look like sad sack people.  Canon.  Done.

Alright, some more ideas about poison gases for Eldritch Americana

Rasfecula are the unfortunate men and women that have been infected with the Stinking Sickness. They constantly ooze a toxic gas from their pores that will kill other creatures that stand nearby.  They retain their minds, and cluster in horrible stinking colonies. In these colonies, they create pools of reeking slime that they bathe in whenever possible, since that is the only thing that gives relief to their burning skin. The miasma that these colonies create is so strong that only a few noxious creatures can live within it (such as Cactus Polyps and Garlicks). Since the stinking Sickness is infections, Rasfecula colonies are almost always wiped out as soon as they are discovered. . . but sometimes the Stinkers win. Maybe there are even whole cities of Rasfecula somewhere out in the Rust Belt?

Spook Juice is the code name for a liquid developed by the FBI to assist them in their raids.  When thrown on the ground, it forms a thin cloud of white gas.  Within this cloud, all white objects are effectively invisible. This can even let you see through a wall (if the wall is white on both sides and gassed on both sides).  It also causes painful blisters around the lips and fingernails.

Zann Gas was also developed by the FBI, specifically for the purpose of seeing through walls. While breathing it, you can see into the fourth dimension, letting you see through walls and into closed containers and pockets.  It also drives you insane at a terrific rate. Canisters can be fired into enemy emplacements to make them go insane. Federal psychomancers also sometimes breath this stuff from a canister on their backs--they're already completely insane, so they don't mind as much.

Goblin Gas is bright green. It gives you mutations.  Developed by Union biomancers, it is now a favorite of mutant supremacists.

Philadelphia Dust is constantly secreted from the gills of Philadelphia Dragons (which are sort of like bulky, quadrupedal, deep-sea eels that weigh about a ton and make "art" out of their food.)  Philly Dust is notable because combustion and electricity are impossible within it. Engines don't run and guns don't fire.  Even flashlights fail after a few seconds within a Philadelphia Dust cloud as the dust seeps in.  Affected parts must be stripped down and cleaned before the work again, although a good rinsing usually works just as well. There's been many instances where a well-armed group of gunmen were killed by a group of naked shiners armed with lumber axes and an accordion full of Philadelphia Dust.

Fat Gas was found inside the USS Shenandoah, an American rigid airship built by the US Navy in 1922.  Following the unfortunate Lost October Incident of 1925, the airship was eventually recovered by a team of Navy stratonauts. The gas had to be pumped out of the reservoir slowly in order to bring the airship down.  When Annapolis was overrun by ghouls in the same year, most of the gas was lost from the public record.  Fat Gas makes things heavier. When used on people, they usually fall over under the weight of their equipment, or even the weight of their own bodies.  Under higher concentrations, breathing can become impossible under the weight of your own ribs.  Under even higher concentrations, the rib cage will actually break under its own weight and the limbs will pulp themselves.  Also good for destroying buildings.  The gas is named for the sensation it causes in those affected.