So you've got that cool new .38 Police Special and you're itching to shoot something.  Ammo is hard to come by--most of the bullets floating around were made during WW1 during the gruesome slog to kill Franz Ferdinand.

Whenever you find ammo: 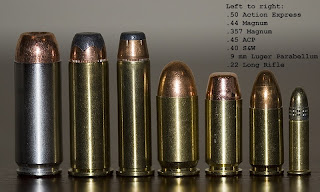 Lothrop, Brigham, and Dark is a company that was started in 1899 in order to turn men into (useful) monsters. They're based on the moon now, and have a brutalist concrete manufactorium in the pitted shadow of Yosganeth, but you can still visit their old factory grounds in Chicago.  Nowadays, they are mostly known for making bullets.  Some of them make their way back to the ground.

(1) .38 Special Jazz Rounds scream when you shoot them.  Anything you shoot screams, too.  It can't stop screaming for 1d6 minutes.

(2) .38 Special Deluxe Rounds are leaders among bullets.  The next 1d6 bullets that are fired in the same area with curve to hit the same place the Deluxe landed.

(3) .38 Special Daisycutter Rounds explode like a 1d6 fireball when they hit.  If you fire many of them, the fireball effects stack.

(4) .38 Special Blackjacket Rounds fire two bullets along the same trajectory: one lead and one ethereal.  Good to killing ghosts.

(5) .38 Special Bricklayer Rounds leave a metal rod behind the path they travel.  The rod is .38 inches in diameter and hangs suspended in the air.  It turns into a greasy, grey wax after 1d6 rounds, and falls from the air.

(6) .38 Special Scotch Rounds knock the target into a copy of our world that contains no life except for plants.  How long does it last?  1d6 (rounds/minutes/tens of minutes/hours, equal chance of each).


Kiowa Rounds all come from the same place: an extensive burial complex in western Montana.  While the Kiowa indians were using it to bury their dead, evidence suggests that the burial complex is much older than the indians themselves. Most of the things found in there have were described as "indescribable" and have been locked away in the vaults beneath the Smithsonian, but the bullets got out.  Well, sort of like bullets.  They have red clay casings, no propellant, and the projectile itself is a sphere of unknown metal that glows in the dark. Whatever they are, they pack a punch.

(7) Kiowa .38 Special Rounds deal +1 damage. When the target sleeps, they will dream of being eaten by herbivorous land animals that were present in N. America during the Holocene. (huge elk, deer, moose, giant sloths, mammoths, etc). Every time they sleep, they must make a save or take 1d6 damage and lose all beneficial effects of that night's sleep. If a character dies from this, their body is entirely devoured, leaving only bloody scraps of flesh and strange noises behind.  The curse lasts until it is lifted or until the afflicted person drinks elk blood from the mouth of an elk's severed head and then bathes in the blood.

(8) Kiowa .357 Magnum Rounds are just like the .38 Specials, except the dreams are of being eaten by almost-human things and you take 2d6 damage.

Opponent Ammunition comes from Opponent Earth, the planet that shares and orbit with Earth but is directly opposed to it.  That is--they have always been behind the sun. Aside from bombarding our cities with diseases, monsters, and garbage, they also occasionally send groups of their "paladins" as invasion forces. Opponent Earth is, in many ways, a mirror of our Earth, and their ammunition works just fine in our guns.

(9) Opponent .45 ACP Green Rounds have black casings with green copper-plated uranium slugs. Not depleted urannium. . . the bullets are radioactive and must be stored in lead cases (or lead-lined Opponent Browning Automatics). These bullets do +1 damage.  Creatures struck must make a save.  Failure means that they begin growing into bloated, fleshy monstrosity.  Each round, the affected creature increases in mass by +50%.  This means that they get +1 to all Str-based stuff and -1 to all Dex-, Wis-, and Cha- based stuff.  They also take 1d6 damage at the beginning of each round.  This lasts for 1d6 rounds, after which the creature stops growing (and stops taking ongoing damage).  Stat effects remain and will return to normal at a rate of 1 point per day. If a character dies from this ongoing damage, treat them as a Far Beast with a HD equal to however many rounds the initial duration was.  Note that this usually ruins clothing and armor that are worn.

(10) Opponent .45 ACP Orange Rounds have black casings with wax slugs. There is a weird sort of space bee inside it, and if you nick the cartridge open it will fly out and attack your face.  If you shake the cartridge, you will piss it off and you can hear the cartridge buzz and maybe roll around a little. An .45 ACP bee is an utter, evil little shit of a bee and it will ignore all fashionable armor, and things that are immune to bullets are not immune to bees (treat them like arrows).  Best of all, the bees can regrow.  If you fill the empty cartridges with blood and tungsten shavings, cover the opening, and leave it in a hot place (behind the furnace) for a few days, the bees will regrow.

(11) Opponent .45 ACP Yellow Rounds have black casings with some sort of sulfurous metal slug. On a hit, these bullets do another 1d6 damage the next turn to living creatures as the flesh blackens, rots, and falls out.  This rot is also extremely smelly, and creatures shot with a yellow round are easy to track, since they stink to high heaven and are constant dripping what looks like soy sauce.

Unquiet Calibers are sometimes found in the skulls of wizards who are shot with Unquiet calibers.  If an unquiet caliber kills a spell-caster, it creates unfired bullets in the brain equal to the amount of damage that the killing blow did.  The casings are bone (presumably from the dead caster's skull), the bullets appear to be glass (but are much harder than actual glass), and the bullet shoots blood everywhere when it is fired--out the barrel, out the breech, etc.  Fire a couple of these rounds and you'll paint the side of your face with dead sorcerer blood.  It might also make it harder to tell if you're damaging something, since the bullet also throws blood on it.


Tears of Skethriman Scolex are harvested from the amber-like secretions that weep from the "eyes" of the Outsider that is currently hovering over London.  The alien government that controls Britain uses the Browning Automatic Rifle extensively, and so they use it to make .30-07 rounds.

(14) Sketh Rounds are .30-06 rounds. They have silver casings filigreed with the alien rune for empire.  Every Sketh Round in your inventory gives a -1 penalty to your saving throw. Upon a hit, the bullet allows the creature to be devoured by an extra-dimensional entity.  If the target fails its save, it takes 1d6 damage at the beginning of all its subsequent turns and gobbets of flesh are ripped from its body, whirled around like, and then disappear into some non-Euclidean gullet. This persists until a Hard heal check is made to dig out the bullet, which takes 2 rounds.


Mobster Rounds have been developed by Chicago's ingenious gangsters as part of their effort to keep the Windy City from falling into unearthly hands.

(15) Chicago No. 12s are .45 ACP rounds that are also called hot shots.  All of the damage is lightning damage.  They also have the benefit of being almost totally silent.  They also have the disadvantage of making you go blind if your eyes are unprotected and you fail a save. Sunglasses don't cut it.  You need welder's goggles or a welding mask.

(16) Chicago No. 19s are .45 ACP rounds that are also called witch bullets.  The shooter is pushed back 1d6 x 5' upon firing if not braced against something, and the target is pushed back 1d6 x 5' as well. These numbers assume human-sized parties, smaller creatures are pushed longer distances, etc. Sammy "The Witch" O'Rourke is famous for using these bullets to fly away while straddling his Thompson M1921.

(17) Chicago No. 20s are .45 ACP rounds that are also called delivery bullets.  They teleport the shooter to the location that the bullet impacts.

(18) Chicago No. 51s are .45 ACP rounds that are also called head shots. They can damage things that are normally immune to bullets, as long as those things have minds. All damage that they do is psychic damage, and heatless purple flame shoots out of the wounds for 1 minute, illuminating as a torch. This light is still produced if you shoot a wall or something, so they have a secondary usage there.

(19) Chicago No. 55s are .45 ACP rounds that are also called church bullets.  Creatures shot with them will begin pouring smoke from every orifice for 1d6 rounds. During these rounds, spellcasting is impossible and attacks are made at a -4 to hit.

The Black Meat of the Mojave is harvested from the mile-long, humanoid corpse that, supposedly, is that of Satan. The flesh is a deadly poison, and the Devil Eaters who wish to begin generating a tolerance will take small sips of Black Flesh that has been diluted many, many times in methyl alcohol.

(20) Devilbone Shells are shotgun shells stuffed with the esoteric bone matter from the Devil's Corpse.  Whenever they get the killing blow on a creature, the shooter gains 1 point in a stat.  Which stat?  Whatever the target's highest stat was.  The shell casing is human leather inscribed with tiny letters, detailing doomsday and pseudo-Christian blasphemies.


Weird bullets should be treated a bit like scrolls.  It's never obvious what they do, and if a player hasn't seen a Chicago No. 20 before, they have no way of determining what it does aside from (1) firing it, or (2) finding an expert and getting him to identify it.


Weird Guns
The Opponents use lead-coated guns because they use radioactive rounds.
The Quiet Gorgas use flesh guns, which are alive.  They restore 1 hp to you when they hit and deal 1 damage to you when they miss.
I'll write more later.  I'm tired.