Oh, weapons.  Let's try to get this over with quickly. 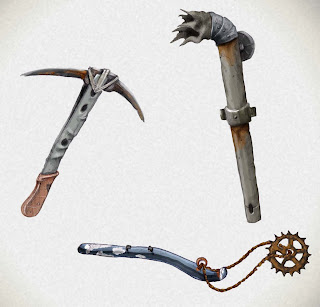 There are 3 categories of melee weapons.  Daggers are quick, swords are balanced, greatswords are powerful.  You can figure which weapon belongs to which category on your own.

Quick Weapons use Dex to modify the attack roll, can only be used 1-handed, and deal 1d6 damage.  They can be drawn in a negligible amount of time.

Balanced Weapons use Dex OR Str to modify the attack roll, can be used 1- or 2-handed, and deal 1d6+Str damage.  They can be drawn in a negligible amount of time.

Powerful Weapons use Str to modify the attack roll, must be used 2-handed, and deal 1d8+Str damage. 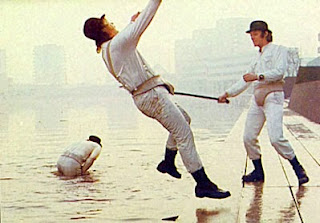 Unarmed Attacks do 1d4 damage and are made at a -2 penalty.
Swords give +2 AC against other melee weapons (but no bonus against bullets or bites).
Axes do 3x the rolled damage on a crit (while other weapons just do maximum damage).
Quick and Balanced Bludgeons can do non-lethal damage without penalty (other weapons get -2).
Powerful Bludgeons always do max damage when they hit a prone target.
Flails ignore AC contributions from shields and/or defensive fighting.
Quarterstaffs give +1 AC when fighting defensively.  They can also do non-lethal damage without penalty.
Powerful Spears can be readied against a charge, and get +2 to hit when charging.
Balanced Spears can be thrown up to 50'.
Gauntlets are Quick, and can also be used to hold something in that hand.


Ranged Weapons
All ranged weapons use Dex to modify the attack roll.  Because they are so easy to use, most firearms give a bonus to hit, usually +1 or +2. 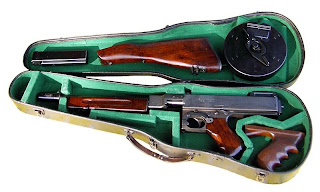 Within one round, a gun can fire as many rounds as its clip allows.  This doesn't allow for extra attacks rolls, but instead gives +1 to hit and +1 to damage for every extra round fired this way.  High damage rolls should be interpreted as multiple bullet wounds.

Sawed-off rifles get -1 to hit, but also occupy 1 line of inventory (instead of 2).

Bayonets can be attached to rifles.  This adds 1 line of inventory to the weapon, and is treated like a dagger.

The Colt Detective Special is a snub-nosed revolver with a 6-round cylinder.  It fires .38 Special rounds and gets +1 to hit.  It can be concealed easily, and only counts as ½ a line of inventory.
The Colt Police Positive Special is a revolver with a 6-round cylinder.  It fires .38 Specials and gets +2 to hit.
The Smith & Wesson .357 Magnum is another 6-chambered revolver. It fires .357 rounds and gets +1 to hit and +1 to damage.  It can also fire .38 Special rounds, but it does not get the +1 to damage.
The Luger Parabellum P08 is a German pistol that fired 9mm bullets from a 8-round cartridge. They were popular trophies after the allies succeeded in killing Franz Ferdinand at the end of WW1.  It gets a +1 to hit.
The M1911 Browning Automatic Pistol is an automatic pistol that fires .45 ACP rounds has a 7-round box magazine.  It gets +1 to hit.

Rifles
The M1917 Springfield is a bolt-action rifle that fires .30-06 rounds.  It gets +3 to hit.
The M1918 Browning Automatic Rifle (The BAR) is a semi-automatic rifle that fires .30-06 rounds.  It has a 20-round magazine.  It gets +2 to hit.
The Remington Model 8 is a pump-action shotgun (sometimes called a scatter gun or a pepper gun) with a 6-round tubular magazine.  Treat it as a rifle that has ½ the normal range.  They fire shotgun shells.  It gets +2 to hit and does +2 damage.
The .577 Nitro Express is an elephant gun that fires .577 black powder rounds.  It is available in single and double-barreled varieties, but can only be fired once per round.  When fired, the shooter must make a Muscle check or fall prone.  It gets +2 to hit and does +4 damage.


Thompson M1921 Sub-Machine Guns fire .45 ACP rounds.  It has two types of magazines.  The 20-round stick magazine is smaller.  The 50-round drum magazine is bulky enough to count as a separate line in inventory. 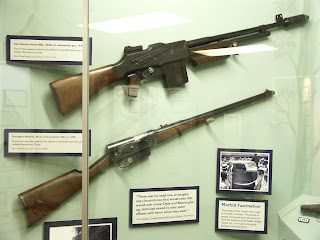 In the setting, guns are so rare and powerful that they sort of replace the role that magic swords have in other settings.  There's little reason to swing a crowbar when you have a shotgun.  However, guns have a few drawbacks. 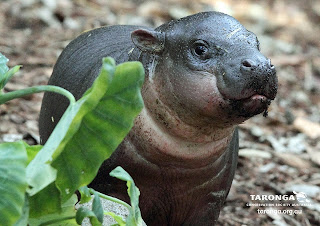 Writing this has been largely a waste of time, since weapon lists have been done and redone a thousand times.  So what's actually interesting about this post?

Daggers doing 1d6 damage while swords dealing 1d6 +/- Str mean that there's little point in using a sword over a dagger unless you are stronger than average. In fact, if you are weaker than average, you'll actually be better off using the dagger. Since I don't want to have ridiculous class-based restrictions or weapon proficiency lists, this actually works out well.  The wizard continues to use the dagger and the fighter uses the sword, but for practical reasons, not arbitrary ones.

Sorcerous weapons make casting easier, which gives a mechanical reason for why wizards are always seen with quarterstaffs.  It's also more fun for wizards to get a bonus for using a staff than a penalty for not using one.

The minor mechanical differences between swords and clubs mean that a fighter has a reason to carry both, but the difference will rarely edge into play.  Which is right about where I want it.  Plus I like the idea that guys with sledgehammer suddenly get a lot more terrifying when you are lying on the ground.

I think the rules for automatic gunfire and sawed-off shotguns is relatively elegant. I guess there's always the risk that the players will hoard ammunition in order to do 30 damage in a single turn to some boss thing, but whatever. If bullets are sufficiently rare, so will that scenario.

I think my next post will be on exotic ammunition.