It looks like a large man wrapped in dirty rags.  Impossibly barrel-chested, yet thin-limbed.  The head seems dull and gawping, while the torso heaves with vitality and intent.  It carries a large sack, and the hand that holds it is not a hand, but an enormous chicken's foot.

In fact, a dungeon eater is a particular species of ogre, perhaps most closely related to the ettin.

Dungeon eaters are ogres that have entered a dungeon and begun devouring its inhabitants.  And those inhabitants do not perish in its labyrinthine gut, but instead languish there, preserved as physical heads (in a high state of distress).

Basically, whenever you cut a dungeon eater, one of the heads will explosively grow from the wound atop a short neck, and join the fray.

They are not mindless, nor are they unreasonable.  And since they are usually motivated by the twin pleasures of treasure and food (especially food), the party should have several useful levers by which to motivate them. 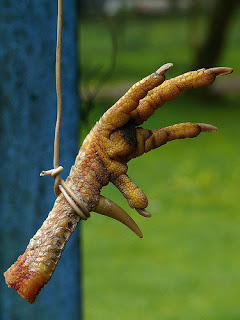 Neocephaly -- Whenever a dungeon eater takes damage, he grows a new head from the wound.  The type of head depends on how much damage was done.  Most heads grant a new type of attack.

Each new head can be attacked separately.  It has HP equal to the attack that spawned it.  If it is left alone for more than ten minutes, the body will pluck off the unresisting heads and re-eat them.

Sour Sack -- The sack is full of headless carcasses, stirred together into an acidic mash (pH ~3.5) and fermenting under a heady layer of bacterial foam.  The smell is ungodly, and when it is open, everyone in 30' must make a Con check vs poison or lose a turn to nausea.

Dungeon Eater's Claw
After you kill the dungeon eater, its claw doesn't die, but lives on.  You can wield it like you could wield any other giant, severed chicken's claw.  If used as a weapon, it deals 1 damage + 1d6 starvation damage (emaciation, dehydration, etc.  No effect on creatures immune to starvation.)  If left alone, it will scrawl out blasphemies and plot hooks in the dust.  It cannot be communicated with.  If it is left unsecured while you are helpless (sleeping, unconscious, restrained) it will crawl out of your backpack and try to choke you.  It has Str 12.