How To Survive Death

Adventure is infinite in all directions, eternal through all timelines, and utterly inescapable.  There is no room where Adventure cannot find you; no door that can keep it out.  You cannot shrink below its attentions; you cannot grow beyond its reach.

Death is no exception to this philosophy.

So here are rules to fight off Death when he comes for you.

What Happens When A PC Dies

This is a minigame that involves putting cards into a hat and then drawing one out randomly.

EXCEPT WARLOCKS: Warlocks don't get to play this game.  Their afterlife is already decided by the terms of the deep soul-bond they made with their patron.  For most of them, death is just the beginning of their servitude.

Here's how to play:

Second, if they have been member of the Church in good standing (paying their 10% tithe, haven't committed any mortal sins since their last confession), remove the Demon from the hat.  This won't apply to many PCs.

Third, check the list below to see what other psychopomps they qualify for.  Add all qualifying psychopomps to the hat.

Fourth, roll a d10 on this table.
1 = Double booked.  Two psychopomps show up to claim your soul.  Draw twice from the hat (in the next step).
2 = Delay.  You died seconds earlier than predicted, and as a result, there is no psychopomp present at the moment of your death to greet you.  If you flee immediately, you'll probably get away.
3-10 = Nothing special.

Fifth, pick a name from the hat to see which psychopomp shows up, and then follow those instructions.

Some poor soul still serving in purgatory.  Leaden sandals, wings bound with wire.  Lantern and appointment book (contains schedule of deaths).  The light from the lantern makes all other paths impossible to take.

Weary penitents have no power over life and death.  They're just here to show you the way to your Final Judgement.

Skeleton in a black robe with a scythe.  Will grab you and drag you away.  This small Death will be collecting souls of a very particular type.  For example, the Death of Blond Women Crushed by Bronze Gears will show up to collect all of the souls of blond women who were crushed to death by bronze gears.

If you rolled "Double Booked" in step 4 and the first name pulled was a Very Specific Death, assume that there was a collision between categories, and two very specific deaths showed up.  Expect them to play a game of chess to settle the question of who gets to collect your soul.  Expect them to keep a very close eye on you while they do so.

Unlike the other psychopomps, deaths are capable of stopping time for themselves and the people they collect.  They use this time to chat, play games, etc.  You are free to negotiate with them, but under no circumstances will they ever return you to life.

Demon
HD 1d6+2
Qualifiation: Default (unless in good standing with the Church)

It'll probably have at least one or more of the following traits: horns, red skin, barbed tail, bat wings, lion's mane, horrible gargoyle face.  It intends to devour you and carry you off to the Underworld.  Souls are useful things: they cannot be destroyed and they are infinitely transmutable.  Whatever it has in store for you is probably going to be horrible, though.

Devils are just demons that have taken the Oaths.  They'll wear symbolic shackles to indicate their status, and they'll explain their actions as they devour you, but they'll devour you just the same.  Expect no judgement from the courts of hell.  If you weren't already pre-judged, they wouldn't have sent a devil to collect you.

If that PC was guilty of a particular sin, this will be represented by the Devil.  For example, a greedy PC might be collected by a golden demon who spews molten gold and chains.

Asmodeus is prime among the Satans, and is a loyal servant of the Church Below.  He/she/it gets tapped for chores like this, sometimes.  Collection is a joy, a breath of fresh air.  Expect him/her/it to relish it.  Probably a much more pleasant experience than being collected by a demon (unless you draw attention to the shackles Asmodeus wears in his/her/its sleeves).  Asmodeus never rushes anything.

If Asmodeus is busy, they'll just send one of the lesser Satans (balors), as the Church Below has several among the ranks of the faithful.

Grampa is overjoyed to see you again, of course.  He looks forward to showing you to your mansion in the Immortal Mountains (provided that you pass your judgement, of course).  How are your cousins doing?  And the twins?

A Saint
HD 8
Qualification: Helped the church in a major way.

There are a lot of saints.  Expect them to be serene and beatific.  Friendly and unshakable.  They still bear the marks of their martyrdom (all Hesayan saints are martyrs) and are missing the body parts that have gone on to become holy relics.

For example: Saint Dorbaine is a tall, thin man with broad limbs.  Like all saints, his hair has been turned by his transfiguration.  He lacks a tongue (it's a relic now) but can speak with the voice of a tolling bell, which is miraculously understandable to all creatures.

Somewhat Specific Death
HD 8
Qualification: Has escaped death at once before OR character is at least level 5.  Put two of these guys in the hat and remove the Very Specific Death.

These are deaths that are one step higher on the totem pole.  Ten feet tall and bulletproof.  While the Very Specific Deaths are sort of sweaty and perfunctory, the Somewhat Specific Deaths are specialists.  Expect lectures, accusations, and name dropping all the famous people they killed.

Somewhat Specific Deaths have names like The Death of Wizards Trapped In A Maze or Death of Those Driven To Autocannibalism By Sorcery.

Death
HD 12
Qualification: Has escaped death more than once before OR character is at least level 10.  Remove all of the other deaths in the hat and replace them all with Death.

This is it.  The big guy.  If you impress him he'll petition Heaven to let you become one of his Reapers (see below).  He's polite and educated and knows all about you.  He actually has an amazing sense of humor.  Unlike those who serve him, he's quite reasonable.

These are dead heroes that Death keeps on hand to troubleshoot special problems.  Basically another adventuring party, except they are all undead and armed with scythes (part of the uniform, unfortunately).

When they aren't out kicking the spleens out of rebellious souls, they fight on the eternal battlefield of Balora (conveniently located next to the eternal mead hall), which they share with a bunch of other dead heroes (Saint Ferragun's faithful, etc).  They're the goth dudes in the viking bar.

Spirits
HD 1d12
Qualification: Had a significant interaction with the spirit world.  Put as many cards in the hat as appropriate.

Dead Death God
HD 12
Qualification: Had a significant interaction with Zala Vacha.  Put as many cards in the hat as appropriate.

Zala Vacha is collective of gods who have been killed or displaced by the Hesayan Church, who they are dedicated to destroying.  Have I blogged about them before?  I know I wrote about the Lavei family at one point.

Summary: They're a doomsday cult of anarcho-gods and iconoclasts.  They're evil, they want to sacrifice millions, but they have a valid point to make, too.

Expect a very old-fashioned god.  The gods that were originally just and forthright have been twisted by the long years of culthood and pseudo-oblivion.  A Sumerian death god reimagined by H. R. Giger and Clive Barker.

GHOST TIME!!!
HD Not Applicable
Qualification: Had some unfinished business that you were very dedicated to.  "The king sent me to find the grail" doesn't count unless you are all about finding that grail.  Put as many cards in the hat as appropriate.

You do not reach the afterlife.  Instead you become a ghost, bound to this location.  The list of things you can do as a ghost (disembodied soul) deserves its own post, but you can basically continue to help out your friends at the cost of going insane and becoming an NPC.

What Happens After You Are Collected?

If you were taken by a Church-affiliated Psychopomp (penitent, saint, a death, Death) then you go on to your Final Judgement.  The path goes along the River of Souls, which exists in both the Material and Ethereal planes (albeit in different forms).

If you were taken by a demon or devil, you're going straight to hell (since you've already been pre-Judged as unclean).

Your (ethereal) heart is cut out and weighed against a sparrow's egg containing all the souls that weren't born so that you could be born.  If your heart is heavy with sin, you are found to be too impure for Heaven, and are sent to Hell.

Here's how you do it:

Characters have a base Goodness of 10.

Add them all up, and then roll a d20.  If you get at less than your Goodness, you go to Heaven.  Yay.  Here's the address to your new mansion in the sky.  Don't worry about the streets of gold--penitents keep them clean.

If you roll your Goodness exactly on the d20, you are destined for 1d6 * 100 years of Purgatory.  You're going to go to Heaven eventually, but you need to purify yourself more (via honest labor).  Welcome to the life of a penitent.

If you roll above your Goodness, you fry like a pork sausage.

Can I Fight These Psychopomp Assholes?

Hell yes!  That's why they have stats and hit points and things.

Just remember that fighting saints and deaths counts against your Goodness.  It's like resisting arrest. 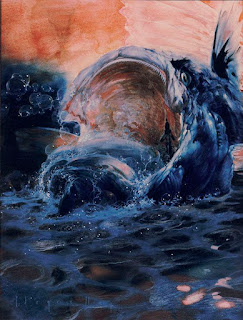 What Stats And Equipment Do I Have When I'm Dead?

You own everything that hasn't been claimed by someone else.  You still have your sword as long as no one else has plucked the sword from your cold, dead fingers.

In Centerra, ownership is not just a human-made condition, it's an obdurate state, like mass or conductivity.

When you die, you get to keep all of the things on your body, and all of the things that you were buried with.  This lasts as long as those items stay with your body (nobody plucks the sword from your hands) and no one loots your tomb.

So if your teammate dies, don't be so quick to pry the magic sword out of her hands--she might be fighting Death on the ethereal plane with that sword at the moment.

Slaves do not remain your property after you are dead.  How can the laws of nature judge competing claims and degrees of slavery?

However, servants do continue to serve you after you are dead.  After all, contracts are part of the natural laws of the cosmos, just like ownership.

Most servants are going to have contracts that end each New Year and must then be renewed.  But a few very foolish people might be willing to write contracts that extend into the afterlife, perhaps in perpetuity.

So yes, one of the things you can hire in cities are suicidal mercenaries.  They take your money, do an incredible amount of fabulously expensive drugs for a few days, and then die.  In return, they promise to help you fight off any psychopomp that comes to collect your soul.  (But remember that their soul might be collected before it can help yours out.)