Game Design: When to Write a Rule

Are you designing a game and writing rules for stuff?  Here's a rule about when you should write a rule and stick it into your rulebook.


Better in this case can mean:


If it don't fulfill one of these needs (compared to what you could come up with on the spot), don't write it down.
This is why I have rules that assume a number exists (like an orc's Str or Dex, when trying to shove an orc) but don't actually give you that number.  Because that's something a DM should be able to adjudicate.

Sure, some guidelines are nice.  Human = Str 10, Orc = Str 14, Ogre = Str 18, Giant = Str 24.  Now I don't have to include Strength stats in my monster manual.  But this is just a yardstick that DMs can use to generate Str scores on the fly.  It's me saying "You know those orcs you saw in the LotR movies?  Those dudes were Str 14."  It's not me saying "All the orcs in this game have Str 14."  It's a calibration standard that DMs can use to generate the Str score for orcs and alligators.  It's not a reference for orcs and alligators.

There's a trend in this hobby for completeness.  When a person writes an entry in their monster manual, there's a drive to include all the numbers that might possibly be relevant, partially because all of the other stat blocks used those numbers.

That's why you sometimes see entries like this.  "Talking tree. . . Move 0', Fly 0', Swim 0'".  That author has chosen completeness over usability.

The same trend leads to setting books that include populations for every town, including percentile breakdowns by race.  "Shropshire, pop 370, 80% human, 17% half-orc, 2% dwarf, 1% halfling".  And that's awful.  It's boring and it gets in the way.  Leave it at "Shropshire, town."  If the 17% half-orcs are significant, mention that.

Never write anything down unless its better than what you could come up with on-the-fly.  The default should be rulings, not rules.

So there's a koan of game design for you.  The best game is not the most complete game. 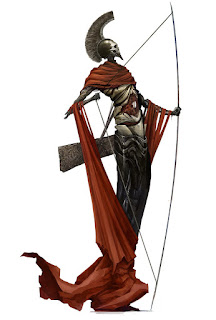