The yeti had an advanced culture before it was wiped out during the Time of Fire and Madness.  Now they exist mostly as a race of disinherited mountain bastards who sometimes have a miraculous magic item from before their fall.  They look like tall, skinny wookies with their faces hidden in their wooly hair.

All yeti can communicate telepathically with any other yeti within 100'.  They do this using their fur, which creates magnetic fields.  A freshly-shaven yeti cannot generate this field, and cannot communicate telepathically.  Among non-yeti, they are only capable of communicating in grunts, trills, hoots, and whistles, and only with difficulty.  With these unsubtle tools, they can only speak a reduced language, with a tiny vocabulary.  (This is why literal translations of yeti speech appear simple.  "Go now."  "Bad metal man.")

It's somewhat comparable to a dog trying to speak.  Even with a fully intelligent brain, they are very limited in how many distinct noises they can make.

Before the fall, they built cities atop mountains, and were famous for creating micro-climates within them.  They filled the mountain tops with forests of gossamer-leaved trees, each of which was an incubator for another micro-climate, which holds another herb.  Yeti were great herbalists (and some still are), especially specializing in entheogens and other psychotropic chemicals.

Yeti love the cold, and they love their shaggy hair, which smells spicy-sweet.  You will never find them in the warm parts of the world, except perhaps underground, where the caverns may be cold enough for ice to form.

Yeti shamans (the axle around which their entire culture revolved) were able to spend a great deal of time outside of their body.  Some of them live on still, as a race of maddeningly lucid ghosts.  The shamans also know a great deal about travel to other planes, perhaps more than anyone else in Centerra.  Most of the planes they visited were only accessible through the mind--the body must remain on the mountain top.

They were said to be allies with an alien race, with whom they sometimes traded bodies when one wished to visit the plane of the other.

But that was then.  Now, the yeti are a shattered race.  Their mountaintop homes are uninhabitable, and no longer hold breathable air.  After the Time of Fire and Madness, they became unsuccessful refugees; no other nation would offer them succor; most were killed on sight for the cruelties and experimentation that they had performed on the other races who wandered too close to their mountain home.

After the great yeti diaspora, you will find yeti living on most mountain ranges in the world in small clans.  They live in crude societies, eking out a living from the unyielding rock.  Many of these small clans have a few powerful magical items, relics from before their mountaintops crumbled.

A few other yeti exist in the cities, working as servants and mercenaries.  They mostly do their level best to stay drunk as often as possible, until they ascend into bestial old age and retreat into the mountains.

Yetis are as intelligent as humans, and possibly must more intelligent.  However, intelligence is not one of their values.

Experiencing so many different psychic states, as they do, yetis appreciate the animal simplicity of a cruder brain.  As yetis get older, they get bigger, stronger, and dumber.  This is seen as a very good thing to happen, and many yetis look forward to the day when they are big and strong and stupid.

When their mountaintop cities fell, the yeti were able to salvage a great deal of their resources--they were not immediately destitute.  Unable to risk warring with an established nation in their weakened state, many yeti decided to build a new homeland in the middle of the Sea of Fish.

They created the great mountain called Lykorum, which they raised out of the ocean.  This exhausted a great deal of their resources.  This was many years after they had been scattered, after the fires and infectious insanities had passed.

On Mount Lykorum, they had a second homeland.  Yetis from all corners of the world came to live there.

In the next part of the story, Calagnagun was a sentient forest fire, burning down cities and outmaneuvering all attempts to extinguish him.

In the last part of the story, Calagnagun was lured to Lykorum.  Once there, attempts to destroy him failed.  In order to isolate him, the mountain of Lykorum was sunk to the bottom of the ocean.  Calagnagun is a creature of alien fire, of a type not found on Centerra, and it was trapped by the mile of cold seawater above him.  It lurks still in the sunken ruins of lost Lykorum.

For the yeti, that was the last straw.  Without Lykorum, they entered a second era of homelessness, which brings us to their current era of yeti, where most know them as the crouching beasts that haunt the high passes, or--in colder climes--as the flea circus that passes out alone in the corner of the bar each night.

Yeti books (always bound in a yeti's own hair, and with yeti leather as a cover) speak of a place that they call the Shining Land.  Most humans believe it to be somewhere in the afterlife, within the Kingdom of Heaven, where mortals may approach immortals and visit the souls of the dead.

The Shining Land is so beautiful that a single glimpse of it can be fatal (similar to the nymph ability).  Yeti adventurers who discovered that place and explored it did so blindfolded.  The Shining Land is not without its perils, but those brave yeti that mapped out hundreds of square miles did so on their hands and knees, groping along the ground, joined together by ropes.

Since the Shining Land is within the provinces of the Kingdom of Heaven, the Church has claimed ownership of all books describing how it is reached.  If you want to find the Shining Land, the road lies through the libraries of Coramont.

Many yeti desire a return to the Shining Land.  They believe that it holds relics of their olden days.

Devolution
Wizard Spell
If the target fails a save, they permanently devolve.  They permanently lose 1d6 Intelligence points and lose the ability to speak, but they gain a new atavistic ability.  For example, humans turn into hair ape-hybrids, and gain the ability to climb extremely well (automatically climb all climbable surfaces that would normally require a roll).

Trance
Wizard Spell
You fall into a deep trance and travel backwards in time to a point in time that you designate.  You do not change location.  If you prepare trance as a level 1 spell, the maximum distance is 3 days prior.  Once there, you have 1d20 rounds to investigate the world before you are pulled back to the future.  You cannot end this duration prematurely.  If you go back to dangerous times, people and creatures may notice you and attack.  Any damage you take (including death) is real, and persists after the spell ends.  You do not actually travel in time, merely into a reproduction of a past time, but even this is enough to be fatal.

Other popular spells among yeti: 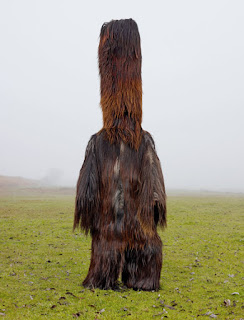