This is a sequel to my first essay on non-Euclidean architecture. If you haven’t read that one first, you should.


A lot of the ideas below are not technically non-Euclidean, but they’re close enough. They all play around with illogical spaces and angles in a way to make an environment illogical.

Hyper-elliptic Spaces: How to Stab Yourself in the Face


Let’s go back to the pillar room from the last article. I talked about "square" rooms that have more than four corners (that are each 90 degrees). Let's was hyperbolic space, where parallel lines splay apart. Let's consider the opposite, where parallel lines come together, and space is more cramped. I.e. hyper-elliptic spaces.
Remember the instance where the room only had 3 square corners before you walked back to where you started? The walls are all 10’ long, but the room is only 75 square feet.

But what if it got even more elliptic? What if the room had only two walls with 90 degree corners? You walk along one wall, turn squarely to your left, and face the wall back to the corner where you started. Maybe a picture will help. 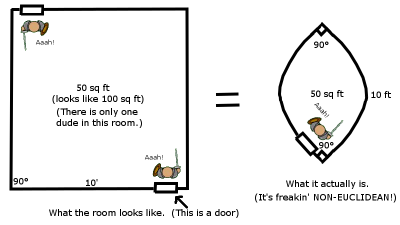 I got rid of the pillar, because we are now wise to the ways of Cthuhlu and don’t need that silly mental crutch anymore. Mental aids are for larva who haven’t even had their first brainfeasting. Anywway, what if we cranked up the curvature of space even more? What if the “square” room had only one wall, and one corner? 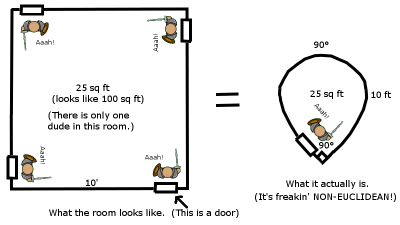 Hopefully, your players will think that they are dealing with dopplegangers or mimics or something and will attack themselves. It’s totally possible for a rogue to run up to the center and sneak attack himself in the back. If you are lucky, the wizard will decide to nuke all these impostors and will get hit by his own fireball four times (think of it as the explosion curving back in on itself, so that it hits many places from many directions, not just one).

You can crank up a hyper-elliptic room to higher levels of awesome if you want. Why not have a 170 degree corner behind you, and 100 copies of yourself? If you run a few laps you’ll finally get to see what your butt looks like when you run. Also good for dressing rooms! And giving yourself a solo massage!

Remember that there there aren't multiple copies of things in this room. It's just that space is curved, as far as you are concerned. It's possible to shoot an arrow that whizzes in front of your face, nicks your chin, and then finally comes to rest sticking out of your ass. The arrow traveled in a straight line, as far as it is concerned.

Tactically, combat is pretty similar, although you have a nice, wrap-around arena to do it in. If you want to ignore all the rules of logic, use the square room from the first image, drop down two miniatures for each character in their rotationally opposed positions, and then drop in a few monsters that ignore this mirroring. I’d never run a combat like this because its chess-like and (doubly) paradoxical, but if this is your cup of tea, by all means, drink it.

An example of a 2-manifold would be the surface of a balloon. Circles have been drawn on the surface of this balloon, and little two-dimensional creatures live on the circumferences of these circles. Now pretend that these "flat" circles are planets. They have a molten core and a thin atmosphere, just like Earth. Anyway, the little creatures take off in their spaceship to find the center of the universe, but eventually just come back to where they started. Why did a straight line take them back to where they started? Because they are 2D critters living on the surface of a 3D sphere, and their tiny brains can’t grasp this. Where is the center of the universe? There is none! But their universe still has a size and a diameter. Their universe can still expand and contract because it’s a balloon (and explode?)

We are 3-dimensional creatures living in a 4-dimensional universe (a 3-manifold) trying to understand it with brains that evolved to hunt mammoths, so it’s natural that things are going to get confusing when we think about bent space time.

Mammoths appear to be merely 3-dimensional because we are standing close to them.


Basically, any type of warped dungeon you can imagine can be accommodated by some type of non-euclidean space. But let’s start small.

Imagine if you drew a dungeon on the surface of a six-sided die. Each side of the die is a different room. You have six rooms, and each room has four doors. However, there is no outer wall to this dungeon. And if you try to find an exit by following one of the walls, you’ll only come back to where you started—and you’ll only see 3 rooms out of the six. You’ll also make three right turns to get there. This is a simple example of a 3-manifold.

You could draw a dungeon on the surface of any of a platonic solid (e.g. your dice). This is a great way to start doing non-euclidean stuff, and has been touched on elsewhere. Or you could draw it on the surface of a donut, a.k.a. a torus. If you’ve played the old arcade game Asteroids, you are already familiar with a toric surface. If you run off the left side of the screen, you enter on the right side. If you fly off the top of the screen, you reappear from the south.

If you’re feeling adventurous, make a dungeon on the surface of a tessuract (or hypercube), a four-dimensional cube. Dealing with truly four-dimensional shapes will give you a headache the first time you deal with it. I honestly think the best way to wrap your brain around a hypercube is to read the wikiepedia article three times. Just remember that a tessuract is just eight equal-sized cubic rooms joined together in a way that destroys any concept of absolute orientation as we know it (such as "up" or "north"). It’s a lot like the “surface of a six-sided die” thing, except that every room has six doors: one in each wall, one in the floor, and one in the ceiling. Tessuracts have actually been used as dungeons before—Dragon magazine published a how-to guide, and you can find other guides online.

Wrap-around dungeons like this are awesome, but they might just annoy the players who are trying to draw a decent map unless you have a lot of non-Euclidean stuff in this spaceship/arcology/R’lyeh to really make the theme clear. More likely, they won't even attempt to map it, which is fine.

If you want to mess around with gravity/elevation, you could also design a dungeon around more ridiculous stuff, such as M.C. Escher’s waterfall painting. Which technically isn't non-Euclidean, since you still can't make perpetual energy machines with non-Euclidean spaces, but whatever. March onwards, like giant radioactive boots.

Multi-Directional Gravity: How to Fall Forever Without Leaving the Room


Gravity only points in one direction at any given location. But what if it didn’t? What if gravity pointed one way on the north side of a room and a slightly different direction on the other?

Option (a) lets you turn a flat room into a mountain. The best part is that it looks flat until you step into it—then your inner ear adjusts and you feel like you are standing on a hillside. Option (b) lets you turn rooms into valleys (or just put a weird mound of water in the center of it--a puddle!) And option (c) lets you create perpetual motion machines if you fill the room with a few round rocks, a foot of water, or bumbling adventurers.

This isn’t really anything non-euclidean (it’s gravity- or light-bending) but whatever.

Fighting Non-Euclidean Creatures: How? Seriously, How?


You sort of can’t. They just don’t map well to a three dimensional world.

The best I can come up with is to use the Pillar Room, and use some sort of boss as the pillar. Maybe it has 20 heads, and you have to run a few laps around the room before you can see all the heads. Maybe it’s a mountain of thrashing tentacles and horrible, nameless orifices. Maybe you are doing the six-sided die thing, and the monster takes up the entirety of one of the rooms, which means that the boss is actually four walls on opposite sides of the dungeon (the sixth room).

Alternatively, you can invoke the themes of non-Euclidean spaces by imitating some of their weirder aspects. Enemies might spin their head around to reveal that it has more faces than should be possible. It might vomit up creatures that are bigger than it. It might seem to teleport, or shunt itself somewhere else. Lovecraft has the Hounds of Tindalos emerging from anyplace where sharp angles meet. You could make a creature that has no distinction between the inside and outside (we’re already inside of it, in a way).

You could have an enemy that appears on opposing walls. It is in both locations at once. If you want to go back to the idea of the hyperbolic pillar room, you could have a pillar-like (or at least tall) enemy. If this writhing pillarbeast moves between two of the PCs, they are effectively cut off from each other, since the pillar marks the axis around which the space revolves. Or you could think of it as bending space around itself to shunt the PCs into 2 identical but overlapping spaces, like the end of that wonderful Silent Hill movie.

If you want to start using insanity rules, this is a good place to start.
Posted by Arnold K at 11:28 PM