A lot of people will tell you that monsters don't need complicated mechanics to be interesting.  And they're right.  A lot of the awesome parts of the fight can come from the fumbles and the crits and the interactions with the environment.

Buuuuut, if you want to add a level of tactics at the monster level, here are five low level guys with gimmicky tricks to them.  They all reward a certain tactic and punish another.  I'm lucky in that my PCs have always enjoyed figuring out how to best defeat a new monster.  If that's your thing, you might like these. 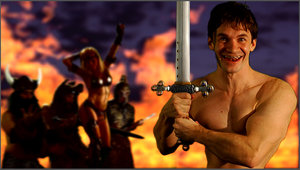 Asthmatic Berserkers can fly into a rage.  While raging, they get +2 to hit and do +2 damage.  However, they can only rage for 1d4+1 turns, after which they stagger around wheezing for five rounds.  While they are staggering around wheezing, they get -2 to hit, -2 to damage, and move at half speed.

These could be reskinned as deeply flawed clockwork warriors who periodically grind gears and shoot out springs, or civilian victims of some rage curse.

Variant - Juicers: The rage lasts up to 10 turns, but can be ended prematurely if someone severs or unplugs the tubes that pump psycho-juice from their backpack into their skulls. 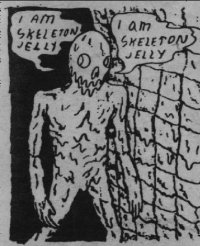 This is a symbiotic organism formed between an undead skeleton and a necromantic slime.  The skeleton's bones are squishy, like lutefisk.  You can't hack it apart, and any injury it takes is automatically healed.  They don't even burn, and acid just makes them smell worse.  They're about as strong as a neurasthenic poet, so give them -2 to grappling or something.

I love these fuckers.  There were a couple of rounds after they where introduced where all the PCs were at a loss.  Then something clicked and they started throwing them down pit traps, pinning them under furniture, and sealing them inside sarcophagi.  Turns out there's a lot of ways to neutralize immortal monsters if the monsters are weak as shit.

You can't reskin these guys as anything else.  They're too perfect the way they are.