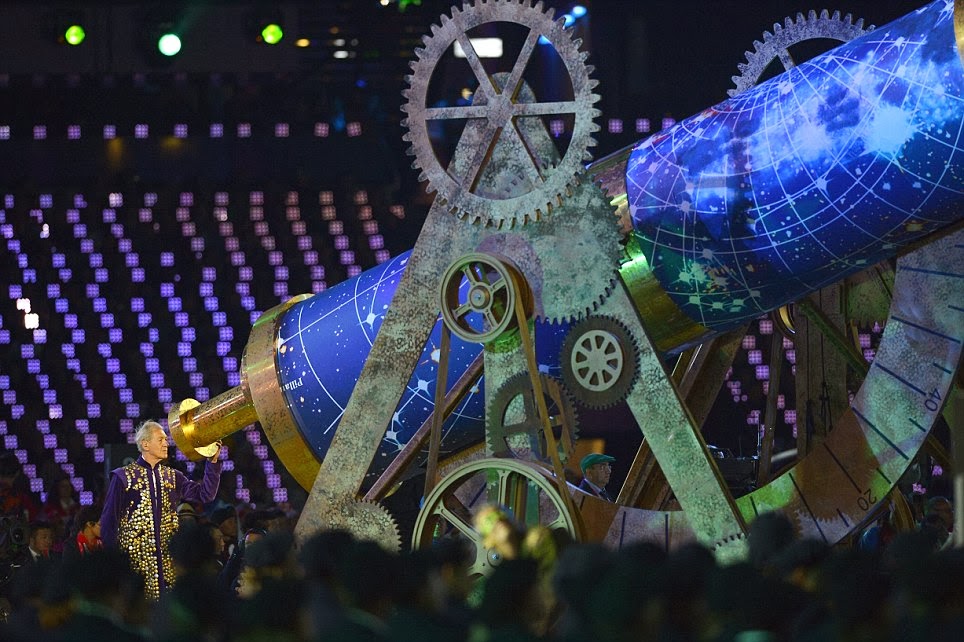 This is an enormous contraption of brass, glass, and gears.  At one end is a chair.  In a compartment beneath this seat is a set of 9 magnesium rods (although there is room for 23 more).  If the magnesium rods are lit and placed into a parabolic apparatus behind the chair (functionally similar to a bullseye lantern) it will project  strong beam of light towards the other end of the device.

The other half of the device resembles a huge telescope.  It is in fact a projector, and with the right combination of prisms and filters, different lenses can be fitted into the front of the "telescope", which will then project an image onto the wall.

The images are densely written pages from spellbook, written in a psychosemantic argot that combines (relatively normal) spell runes, geometric jargon, and ancestral archetypal symbolic shorthand.  The spells contained in the Apparatus of Auchindoa are better documented than nearly any other spellbook, and so it is unusually easy to learn spells from the device.  However, accessing the spells is the difficult part, and finding the correct combinations of diffractors and wavelengths is essentially random (unless a proficient user is present).

The Apparatus contains many common spells, as well as Daily Ghost, Argent Refuge, and Glass Band.

Daily Ghost
Level 4 Spell
Creates a pseudo-ghost from all of the body's cells that die each day.  (Seriously, a pound of you dies each day and you don't even care.)  This ghost manifests as a floating version of your skin, with visible intestines on the inside and a visible haze of blood vessels.  The caster can command it mentally as long as it is in within sight.  Don't let it wander off (see last paragraph).  A caster can only have one of these at a time.

It causes seizures and necrotic lesions in those that it touches.  It is fragile, however, and a more common use of it is to use it to speak with the caster's voice (which it can do perfectly).  The caster can also eat it, which will heal them for 1d4 HP.

If the caster dies while the pseudo-ghost is active, it will re-inhabit the body, heal it, and then animate it.  Since the mind of a psuedo-ghost is an utterly alien creature, without understanding or sympathy of human life, this is generally a very bad thing.  The outsider-given-flesh speaks with the Voice of Three Tongues, and slings impossible magics before being hacked apart, or else getting trapped in some dungeon, unable to escape.  (It's basically an insane wizard-zombie that babbled with three voices.)

Argent Refuge
Level 1 Spell
Caster steps into a mirror that is at least as wide and tall as the caster.  The caster can remain in there for at least 8 hours.  She can look out of the mirror, but others cannot look in.  If the mirror is broken, she is ejected and takes 3d6 damage from the lacerations. 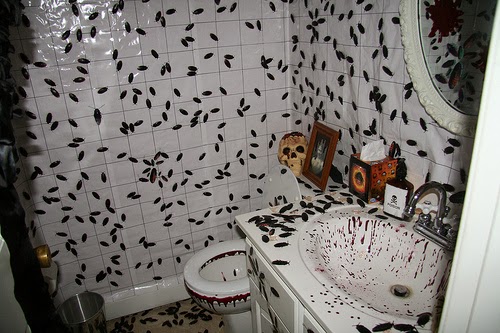 A rotten log.  A subtle hissing and rustling can be heard within it.  Searching will reveal hidden hinges and a clasp.  The inside of the log is a miniature carving of a church interio, complete with pews and an altar.  Milling around inside this odd dollhouse are 600-700 white cockroaches, each with a letter scratched into their backs, in a wandering script, as if someone crudely etched each one with a dull needle, over and over again, never quite in the same letter twice.

The cockroaches are the spellbook.  When the log is opened, they will crawl to the nearest flat surface and spell out the title page: "M-Y-R-I-A-P-O-D-A-L-I-A".  By running your fingers through the insects, you can turn the pages (miming the act of turning the page, advancing through a book).  However, the cockroaches never hold still for very long, and trying to make sense of the skittering insects can be maddening for an inexperienced user.  (An experienced user is already mad, of course).  Additionally, the words on the "page" never seem to be exactly the same twice.

Some of the pages cannot be accessed simply by "turning the page" to the right.  More subtle types of caresses must be given to the insects before they reveal the hidden pages.  Rumors that it is capable of displaying results in response to questions, or that the spellbook allows one to contact an unknown intelligence are unsubstantiated.

Still, despite its oddity, the Myriapodalia of Exestre is a functional spellbook.  It contains many common spells, as well as Speak With Insect, Ruinous Crow, Exoskeletal Shackles, and Yellow Servant.

The cockroaches are physically normal.  If at least half of them are killed, they will disperse as normal cockroaches (and the spellbook is effectively destroyed).  They eat and breed.  After a cockroach reaches its final molt, its companions will scratch a letter into its back.  Subadult roaches are sometimes similarly inscribed, but with punctuation.

Speak With Insect
Level 1 Magic-User Spell
Caster can speak with insects for a few minutes.

Ruinous Crow
Level 2 Magic-User Spell
If a touched crow fails a saving throw, it will fly unerringly to a named person within a 1 mile radius who has been identified unambiguously to the crow.  Then it will land on the person's shoulder and vomit a hot mixture of blood and gastic acid into the person's face.  (The spell actually converts all of the crow's innards into this poison, so all that is left is just skin and feathers.)  The person takes 1d4 damage and must make a save vs disease.  If they fail this save, they will sicken and die within 2d6 days.

Exoskeletal Shackles
Level 5 Magic-User Spell
If the target fails its save, over the next 2d6 hours they will mutate into an insect hybrid under the control of the caster.  (+AC, -speed and intellect, you can figure out the details.)

Yellow Servant
Level 3 Magic-User Spell
This appears to be a highly modified version of the Unseen Servant spell.  The spell summons an invisible, intangible force that nevertheless reeks of ammonia and leaves yellow footprints.  It can anything an unseen servant can do, except that it is much stronger.  If commanded to kill a target, it will attempt to strangle them (treat as a 3HD creature with 14 Str).  It can be escaped, but is only affected by things that affect an area.